The days are growing noticeably longer, and the sun is even out on some of 'em. What are you going to fill them with? Oh, I dunno. Maybe some comedy, a grateful farewell to one of the city's most high-profile figures, a good book? All of these are options this week.

1. Leslie Jones, bringer of mirth
Long before she became a break-out star on Saturday Night Live, Leslie Jones was a standup comedian honing her craft on stages across the country. She spent more than two decades learning how to command a stage, work a crowd and pace a set so that laughs explode out of the audience. Jones brings her high-energy set to town at 8 p.m. Friday, April 27, at the Touhill Performing Arts Center on the University of Missouri-St. Louis campus (1 University Drive at Natural Bridge Road; www.touhill.org). The performance is part of the school's annual Mirth Week celebration, and tickets are $35.

2. A romantic end of an era
For thirteen years music director David Robertson has led the St. Louis Symphony to new heights and tightened the orchestra's bond with the region through special performances, community concerts and a sometimes-daring choice of works. His tenure comes to an end soon, but he won't go quietly. At 10:30 a.m. Friday and 8 p.m. Saturday (April 27 and 28) at Powell Hall (718 North Grand Boulevard; www.slso.org), Robertson leads the city's finest big band through Anton Bruckner's always-inspiring Symphony No. 4, which is nicknamed the "Romantic." It's a moving piece that evokes a sense of the idyllic countryside, which gives way to a bracing barrage of horns that are meant to recall the sounds of a medieval hunt before climaxing with a densely woven wall of sound and color that sums up everything that came before. It's difficult not to see it as both a loving look back at Robertson's time in St. Louis and a grand farewell. In true Robertsonian fashion, the Bruckner No. 4 is paired with modern German composer Jörg Widmann's imposing Violin Concerto, with Christian Tetzlaff doing the honors. Tickets are $25 to $68.

3. A room without books is like a body without a soul
Independent Bookstore Day started four years ago as a response to the success of Independent Record Day. Shop owners saw how limited-edition merchandise could draw record collectors in record numbers. They realized that with a little help from the publishing industry, they also had the opportunity to attract hardcore readers.

This year, festivities at Left Bank Books (399 North Euclid Avenue; www.left-bank.com) start at 10 a.m. Saturday, April 28. Premiums range from a plush version of Maisy mouse wearing the Read With Me T-shirt to a Literary Map of the Universe, which features a mix of classic and obscure science-fiction novels. The freebie is Kevin Cannon's Midwest Indie Bookstore Roadmap, highlighting 150 bookstores from Michigan's Upper Peninsula to to Missouri (there's a pop-out illustration of St. Louis' great options.)

But Independent Bookstore Day is more than merchandise: It's a celebration of bibliophiles, both the customers and the people behind the registers. Left Bank always invites artists, authors and friends of the store to come out and join the fun. This year Dancakes will be on site from 10 a.m. to noon whipping up custom, literary-themed pancakes and at 2 p.m. The Magnificoes! perform a dramatic reading of William Shakespeare's The Force Doth Awaken: Star Wars Part the Seventh.

Left Bank is not the only indie store in town, however. The Novel Neighbor (7905 Big Bend Boulevard, Webster Groves) has literary cocktails, a band called the Wargs with a Game of Thrones and Harry Potter theme, and guest authors, as well as a selection of special merchandise. Maplewood's The Book House (7352 Manchester Road) will also have guest authors signing books, giveaways and storytellers.

4. President Jingoism, singing sensation
Andrew Jackson was an irascible old soldier who ran for president and won the popular election on the back of his plainspoken manner and tough talk. But because no candidate won an electoral majority, the power elite chose someone else to do the job. In his anger at being snubbed, Jackson and his supporters founded the Democratic Party and roared into the presidency four years later. He fought duels while in office, survived an assassination attempt and ran roughshod over anyone who stood in his way, forcing Native American people onto the Trail of Tears and upholding slavery. The Alex Timbers and Michael Friedman musical Bloody Bloody Andrew Jackson romanticizes the man as a violent heartthrob who uses populism and force to reshape America, for better and for worse. The Saint Louis University Theatre performs the show at 8 p.m. Thursday through Saturday and 2 p.m. Sunday (April 26 to 29) at the Grandel Theatre (3610 Grandel Square; www.kranzbergartsfoundation.org). Tickets are $5 to $8.

5. She'd kill for a taste of revenge
Regina Hubbard was born wealthy but unable to keep any of it, thanks to the inheritance practices of early-twentieth-century America. Her brothers Oscar and Benjamin split the family fortune and now live carefree, while Regina had to marry the terminally unhealthy Horace Giddens for his money. When her brothers hatch a scheme to acquire Horace's money through a questionable marriage, Horace rebuffs them, but Regina has other plans. She is not the kind of woman to quietly acquiesce; blackmail and murder are her tools, and she uses them well. William Wyman's film adaptation of Lillian Hellman's drama Little Foxes stars Bette Davis as the vituperative Regina, and it screens at 6:30 p.m. Sunday, April 29, at Webster University's Moore Auditorium (470 East Lockwood Avenue; www.webster.edu/film-series). Opera Theatre Saint Louis presents Marc Blitzstein's operatic adaptation of the play, Regina, later this May, and thanks to OTSL, admission for the film is free. 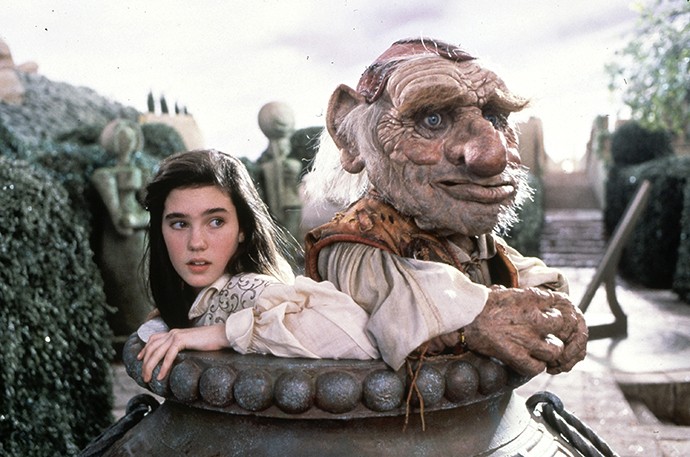 6. Bret! It's 1986 David Bowie from the movie Labyrinth
Jim Henson's fantasy film Labyrinth becomes more popular with each passing year. It's a modern fairy tale that stars David Bowie as Jareth the Goblin King, who steals the infant stepbrother of Sarah (Jennifer Connelly) at her callous request. Quickly regretting her hasty wish, Sarah must try to penetrate Jareth's labyrinth (not a euphemism) to rescue the baby. Jareth's magic and dark charisma are powerful, but so is love, and with the help of some strange friends, she might get her stepbrother out of there. Fathom Events brings Labyrinth back to theaters for a limited time. You can see it locally at 2 and 7 p.m. Sunday and 7 p.m. Tuesday and Wednesday (April 29 through May 2) at the Marcus Wehrenberg Ronnies 20 (5320 South Lindbergh Boulevard; www.fathomevents.com). Tickets are $12.50, and Labyrinth-inspired costumes are encouraged.

7. What he has in the coffin is dead, and was never alive
As is the case with a surprising number of Quentin Tarantino's films, his Django Unchained bears many similarities to a violent spaghetti Western — in this case, Sergio Corbucci's Django. In the 1966 film, Franco Nero stars as the titular anti-hero, a former Union soldier who wanders around dragging a coffin behind him. When he rescues the prostitute Maria from a gang of murderous thugs, he earns the enmity of Major Jackson and his gang of ex-Confederate soldiers. This sets in motion a chain reaction of revenge, double-cross and extreme carnage that comes with a ludicrously high body count. The Strange Brew crew screens the cult classic at 8 p.m. Wednesday, May 2, at Schlafly Bottleworks (7260 Southwest Avenue, Maplewood; www.webster.edu/film-series). Tickets are $5.