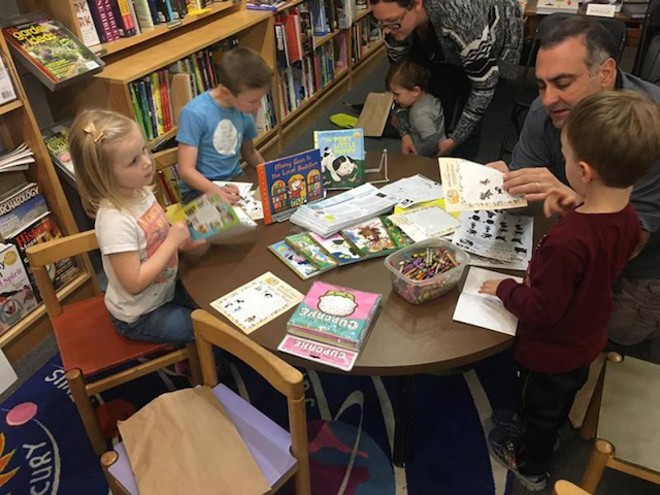 Independent Bookstore Day started four years ago as a response to the success of Independent Record Day. Shop owners saw how limited-edition merchandise could draw record collectors in record numbers. They realized that with a little help from the publishing industry, they also had the opportunity to attract hardcore readers.

At Left Bank Books (399 North Euclid Avenue; www.left-bank.com) the event has been a big success, according to events coordinator and bookseller Lauren Wiser. "The first year it was kind of an experiment. We didn't know what to expect," she recalls."We put together some author events, and oh gosh, people came. We've had people waiting at 9:30 a.m. to get in," she adds. "It depends on what the exclusive merchandise is that year. We're busy 'til 5 or 6 p.m."


This year, festivities start at 10 a.m. Premiums range from a plush version of Maisy mouse wearing the Read With Me T-shirt to a Literary Map of the Universe, which features a mix of classic and obscure science-fiction novels. The freebie is Kevin Cannon's Midwest Indie Bookstore Roadmap, highlighting 150 bookstores from Michigan's Upper Peninsula to to Missouri (there's a pop-out illustration of St. Louis' great options.)

But Independent Bookstore Day is more than merchandise: It's a celebration of bibliophiles, both the customers and the people behind the registers. Left Bank always invites artists, authors and friends of the store to come out and join the fun. This year Dancakes will be on site from 10 a.m. to noon whipping up custom, literary-themed pancakes and at 2 p.m. The Magnificoes! perform a dramatic reading of William Shakespeare's The Force Doth Awaken: Star Wars Part the Seventh.

To add the spice of competition, Wiser and staffer Shane will hawk their favorite books during Staff Pick Supermarket Sweep, a game for which the rules are still being decided upon because they've never done it before — danger abounds.

"It's something new that we sort of invented this year," Wiser explains. "We'll have a set amount of time, and we'll see who can sell the most books to a customer. We'll ask them what they like to read, what their faves are, and then we try to sell them as many as we can. We're still working out how we'll choose a customer. We might pick a regular, or we might ask for volunteers."

Left Bank is not the only indie store in town, however. As Wiser is quick to point out, "We have an embarrassment of riches here in St. Louis.” The Novel Neighbor (7905 Big Bend Boulevard, Webster Groves) has literary cocktails, a band called the Wargs with a Game of Thrones and Harry Potter theme, and guest authors, as well as a selection of special merchandise. Maplewood's The Book House (7352 Manchester Road) will also have guest authors signing books, giveaways and storytellers.

All of this is a tribute to St. Louis' group embrace of the neighborhood bookstore, which was rumored to be on its deathbed years ago. Wiser knew that was a lie when people predicted it in the 1990s, and it remains untrue today.

"Everybody predicted the death of print and of the indie bookstore, but we knew that wasn't going to happen," she says with certainty. "We curate our selection very carefully; we don't try to sell books that people don't want. We don't have a corporate structure, we have no algorithm and we take customer service very importantly. The big stores can't do what we do."