Dwell in Other Futures Art Fest Will Explore 'Artivism' in St. Louis 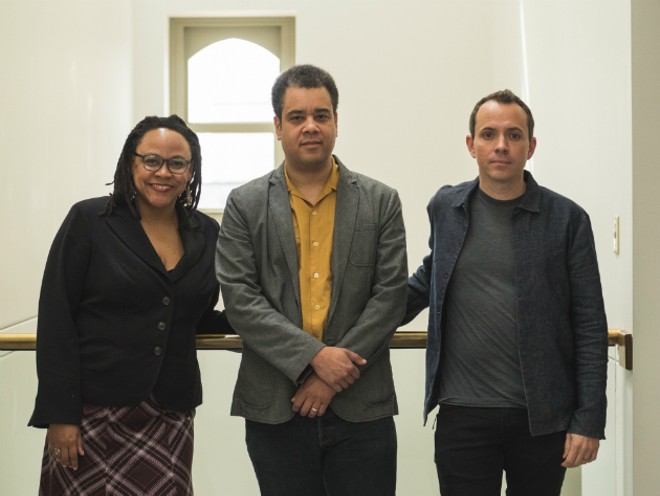 The Dwell in Other Futures Art Fest will feature some major -isms: futurism, urbanism, activism and even, in the words of the organizers, "artivism." Three St. Louis "artivists" will be featured in the festival, along with other events and local guests that explore the future of race in Midwest cities.

After its opening night at .ZACK (3224 Locust) on April 27, the festival will take place at the Pulitzer Arts Foundation (3716 Washington Boulevard) throughout the afternoon and evening of April 28. Organized by Gavin Kroeber, Rebecca Wanzo and Tim Portlock, it will feature poetry, visual art, sound and other creative mixes, all with a particular focus on the Midwest.

Kroeber got his master's degree from the Harvard Graduate School of Design in 2012. He says that artivism to him is art that is useful — a hybrid space between art and activism.

"Traditionally the idea is that art transcends politics and activism is entirely instrumental and about functionality and purpose," Kroeber says. "But there's a really rich web made of people conducting experiments to see how an artistic project can actually shift the world."

St. Louis artists featured in the festival are a part of this hybrid. Damon Davis, acclaimed for his public art installation All Hands on Deck and the documentary Whose Streets?, will present sound work, along with installations by Addoley Dzegede, video work by Katherine Simone Reynolds and collaboration installations by Basil Kincaid and Reuben Reuel.

Both Dwell in Other Futures and the idea of urban futurism as a whole were inspired by Afro-futuristic science fiction author Samuel R. Delaney, one of the first prominent sci-fi writers who is gay and African-American. His 1975 novel Dhalgren features a journey through a fictional city in the Midwest after an unknown catastrophe.

Delaney is slated speak on opening night to kick off the event with a conversation about "The Autumnal City," a famous phrase from Dhalgren that might well apply to St. Louis. Later in the night, the festival will present a collaborative pop-up exhibition by Kincaid and fashion designer Reuel.

Through Saturday, installations will be on view throughout the day, along with some conversation on imagining St. Louis' future. The day will also include a workshop by St. Louis activist Elizabeth Vega and a series of performative manifestos for the future of St. Louis featuring poets, musicians and designers.

Wanzo is an associate professor of women, gender and sexuality studies at Washington University, as well as a black feminist theorist and a sci-fi fan. Science fiction is a great way to explore the possibilities of urban futures, she says.

The event is free, but RSVP is required.