Drink Like a Superhero at Comic Book-Themed Soulard Pub Crawl 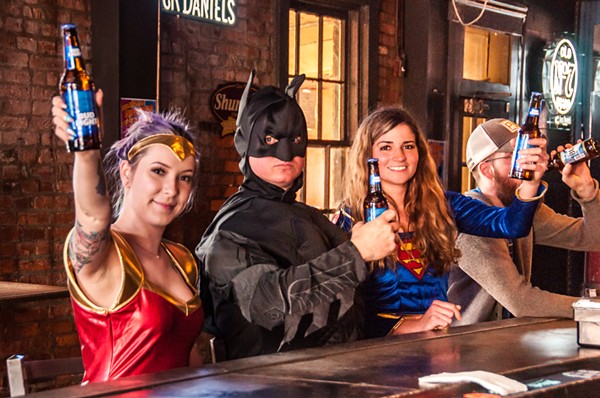 If your superpower is consuming overflowing steins of lager while noting the finer points of Victorian-era architecture, you’re in for a treat this weekend.

A new comic book-themed pub crawl will launch on April 14 to benefit beautification efforts in the historic Soulard neighborhood. Organizers are hoping that enough people “ZAP,” “POW” and “BAM” their way through the bars to turn the inaugural Soulard Superhero Pub Crawl into a yearly event.

“I thought that was a fun way to frame it: ‘Literally be a Soulard superhero by going to drink. The more you drink in Soulard, the more beautiful it will get,’” says Micah Usher, business director of the Soulard Business Association and media and promotions manager at Molly’s.

Usher (an occasional RFT contributor) says that at least seventeen Soulard bars will be welcoming revelers on Saturday, with even more expected to be confirmed by party night. Geeks-in-the-know will chuckle at the themed drink and food specials along the crawl, such as the Hulk Smash shot at Molly’s, the Captain 'Merica bacon cheeseburger slice at Epic Pizza & Subs, the Gotham Bomb at Big Daddy’s Bar & Grill and the Black Widow drink at Pieces Board Game Bar.

“I’m hoping that this will inspire other bars to get creative with it, too,” Usher says. “We’re asking them to make it a fun experience, because it’s not just people coming out to dress up like a superhero, it’s also people drinking like a superhero.”

A $20 registration fee includes a 20 oz. commemorative cup that changes colors, a surprise trinket and drink specials at every stop. If you’ve got your own Justice League, you’ll save on registration costs with the four-person package for $60. The Batmobile — ok, ok, regular shuttles — will be available to transport drinkers from location to location throughout the neighborhood.

Be ready to declare your character allegiance by donning a comic-con-worthy costume. Usher says that photographers and judges will be roaming throughout the night to award big prizes to those who look like they’re ready to be part of the next D.C. or Marvel flick.

“All of the bars that are participating are donating two $25 gift cards for costume contest prizes. I’m really looking forward to seeing all these people in costume,” Usher says, noting that he’s still deciding on his own duds.

Usher has his fingers crossed for a big turnout — so far, more than 1,000 people have indicated their interest via the event’s Facebook listing. With Black Panther earning nearly $1.3 billion and the next Avengers film expected to fare nearly as well later this month, the timing for a superhero-themed drinking event couldn’t be better. Usher is counting on that to bring in the money for the Soulard Restoration Group’s beautification committee, which handles the maintenance and improvement of the neighborhood’s streetscapes, parks and the community center at Soulard Station.

“I’m hoping to make it a yearly crawl to benefit Soulard,” Usher says. “Business leaders were talking about how a lot of pub crawls come through here that don’t directly benefit Soulard. So I was talking with them about some ideas I had, and they suggested that the SRG was the best way to put that money back into Soulard.

“I love how everybody here works together really well. It’s not like the businesses are all competing with each other. If people come down here to have a good time, then we all love that,” Usher continues. “And I love how the business leaders here are approachable — you can sit down and have a beer with them and just talk about ideas, and there are a lot of people here in the community who are really excited about doing that."