In Rosencrantz and Guildenstern, Hamlet's Pals Are the Stars. What Could Go Wrong? 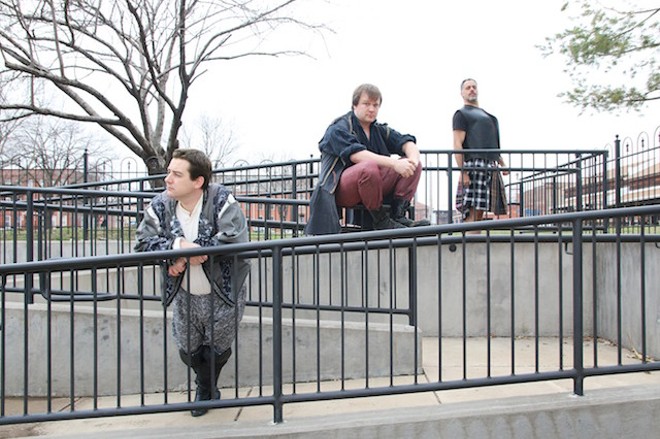 Tom Stoppard's tragicomic play Rosencrantz and Guildenstern Are Dead is considered a classic of the modern stage, and yet it's rarely produced. Perhaps that's because of its reputation as an absurdist farce (naysayers would go with "ridiculous nonsense”). And yet it remains in the canon of great English plays after more than 50 years of changing tastes and rapidly modernizing audiences. What is its secret?

Suki Peters, the artistic director of St. Louis Shakespeare, is deep in rehearsals for the company's imminent production of the play (she's directing), and deeply in love with Stoppard's first major work. For her, the appeal is twofold.

"It's underproduced; that's why we wanted to do it," she offers. "It's hard, but maybe that's the problem. People don't want to open themselves up to the conversations that will happen. There have been lots of Hamlets produced lately, so people have it in the top of mind, and this will make more sense."

Hamlet and Rosencrantz and Guildenstern fit together like a mortise and tenon joint. Bit players in Hamlet, Rosencrantz and Guildenstern are old friends of the melancholy Dane who show up to visit, but then agree to murder Hamlet at the behest of his stepfather. In their minds, a dead friend is worth being in the good graces of the new Danish king. 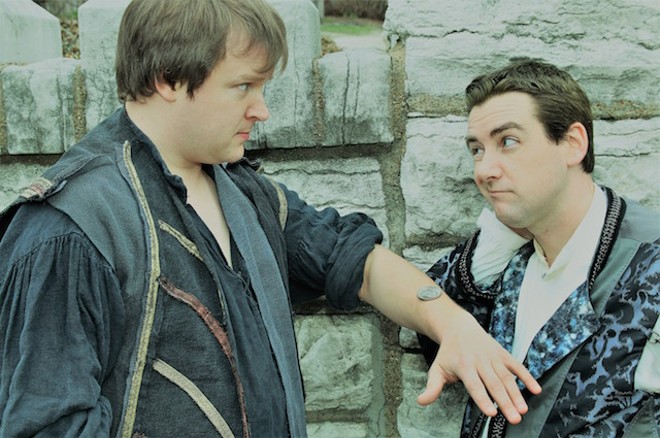 In Stoppard's play, these two terrible friends are less mercenary and more confused by what's going on around them. All of the action in Hamlet is repeated, but in this version Rosencrantz and Guildenstern are the stars, always on stage while the "supporting cast" of king, queen, acting troupe (and its mysterious leader, the Player) and various courtiers appear suddenly for a short interaction with the boys, and then disappear — often to die, because everybody dies in Hamlet, including our heroes. One play is a reflection of the other, but which is the real play?

Oh, and this is a comedy — even though, like Hamlet, the ultimate subject is death. For Peters, the play’s comic moments only deepen her love.

"The thing about Stoppard is that he has this writing style that makes heavier topics more palatable," she explains. "It is a comedy, but you want to the audience to have conversations after it ends. Is it all for nothing? What is the meaning of death? Is there hope?"

A comedy riddled with darkness, extended silences, confusion and the characters' foreknowledge of their own deaths is asking a lot of the audience, but it works because of the interplay between the two main characters.

"I think Rosencrantz has one of my favorite lines," Peters says. “It’s, 'Be happy. If you're not happy what's the point of surviving?' He's very zen about his death. And then you have Guildenstern who struggles with their purpose, and is upset about dying." In an interesting twist, Peters admits that if some audience members leave thinking that the play is ridiculous nonsense, she's OK with that, with one caveat.

"I hope that audiences take away that their viewpoints are valid," she says. "But I hope it inspires them to talk about death, and purpose, and why? Why are we here? And I hope they find some peace, I think."

Peters has seen the effect Rosencrantz and Guildenstern can have on a receptive audience. "Everyday at rehearsal people come in excited about something new they've found in it," she relates. "It's sparking conversations. Every good actor will come in having done their homework and found something new. But for this show, we've had some really good conversations about death, and purpose and where we are. We've opened up ourselves to each other. Everybody's learned a little bit about themselves. All of us seem to relate to one of the main characters."

She knows exactly why this is happening.

"With Stoppard, it's absurdist, but it's hopeful," she says.