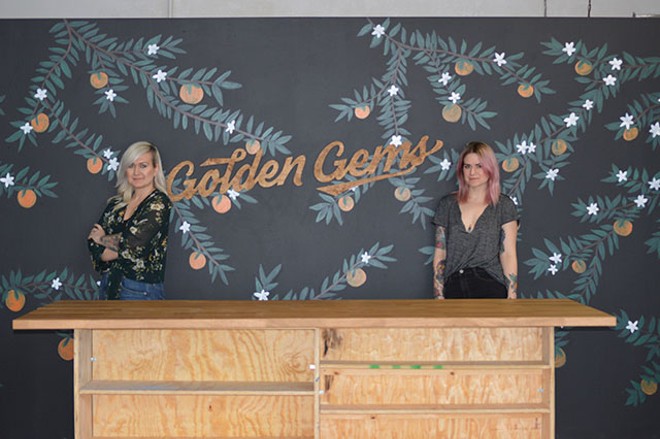 We won't tell you whether or not working with family members is a good idea. Instead, we'll point you in the direction of Amanda Helman and Susan Logsdon, the sister duo behind Cherokee Street's newest shop, Golden Gems (3156 Cherokee Street), which is set to open April 27 in the storefront that previously held Westminster Press.

Growing up just outside Orlando, Florida, as the two youngest of five children, Helman and Logsdon were close. "We would always be doing funny little things together," says Helman, "making videos or Craft Makers of America — we had a fake little craft show we'd put on."

Logsdon, now 30, moved to the region first. She moved to the small Illinois town of Greenville, about an hour east of St. Louis, to attend Greenville University where she studied psychology. In 2009, she moved to St. Louis.

Soon after, Helman, now 27, followed her older sister to Greenville, studying art at the university. She, too, decided to make St. Louis home.

Originally, each had her own Etsy shop. Logsdon had been making banners, while Helman dabbled in enamel pins. "We weren't really growing," says Helman, referring to their individual stores. "We were like, 'What are we doing? Why aren't we working together?'" In 2016, the siblings decided to join forces under a shared brand, Golden Gems.

"Immediately after we started working together, after we started giving each other input on designs, things just started to grow from there," Helman says. "We definitely work better together."

After the merge, the sisters began going to craft shows and managed to wholesale their products to several retailers in the St. Louis area. Currently, their designs are sold in 40 stories across the country as well as in two stores in Canada. "It allowed us to make more products, more money, meet more people," Helman says.

Their products are truly original. From fiery banners and stickers to prints, pins and planters, each has a different empowering message for the buyer. "It was our mantra," begins Logsdon.

Their designs combine little pieces of their lives here in St. Louis as well as in Florida. On the back wall of the store is a large orange blossom mural, with "Golden Gem" written in cursive — a small tribute to their home state. '

"Our parents still live in the same house we grew up in on Golden Gem Road," says Helman, "and Golden Gem is a type of orange. We definitely draw a lot of inspiration from where we grew up."

But for now, they're focused on engaging their new community on Cherokee Street. "We want to do some events, workshops, make-and-take kind of things," says Logsdon.

"We want it to be a community based environment. We want to invite people in," adds Helman.

One event they have planned to welcome the community is their opening day celebration. On April 27, the sisters plan to have music, drinks and food on site, as well as a custom banner station.

"It's been a dream to have a storefront," they say, and then the sisters laugh because each is aware that her dream would not be reality without the other — perhaps proving that family can in fact make the best coworkers.