Clint Malarchuk Survived Hockey's Most Gruesome Accident Against the Blues 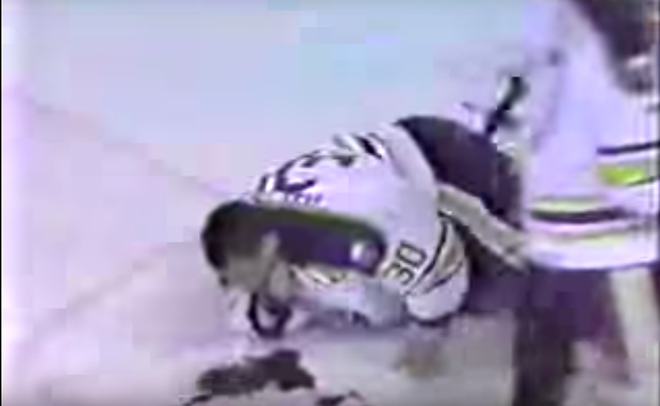 For hockey fans of a certain age, the name "Clint Malarchuk" conjures up a very particular image: The Buffalo Sabres goalie in his home whites, kneeling on the ice as blood jets from his severed neck.

Malarchuk was in the crease on March 22, 1989, for a game against the visiting St. Louis Blues when Blues forward Steve Tuttle cut towards the net and ended up tangled with Sabres defenseman Uwe Krupp. In the scrum, Tuttle's skate cut a six-inch long slash in Malarchuk's neck. The skate severed his carotid artery and may have killed him, if not for the quick actions of Sabres' trainer Jim Pizzutelli, a Vietnam veteran who had treated serious injuries before.

Tape of the incident was widely broadcast, to the point that I can't fully recall if I saw it live (at the time, most Blues away games were televised on local TV) or in a later broadcast. Rewatching it today, the footage is a bit grainy, but you can see a staggering amount of blood spill into the ice — and by the announcers' horrified reaction, you can only imagine how bad it must have looked in full color.

Their voices overlap each other as blood gushes and horror mounts.

"Oh my god, please take the camera off it, don't even bring it over there, please," one finally pleads. The camera then pulls back. "Just keep it away, terrible."

"My god, what happened?" one cries.


Once Malarchuk returned to the ice (an improbable ten days later!), footage of the the accident became popular as another example of the toughness of hockey players. It's all over YouTube today, if you want to watch a man cheat death.

But according to Malarchuk, the incident broke him. In a well-written piece for Derek Jeter's The Player's Tribune released last week on the anniversary of the fateful game, Malarchuk describes how his mind and his life began to unravel after his "triumphant return" to the ice. He describes what he was thinking in the immediate aftermath of the accident.


So this is it, Clint. You are going to die. Tonight. Right here. In Buffalo.

That’s what I was thinking as I watched the blood splatter and stain that goalie crease.

But the weird thing was, as I’m thinking that, my main focus wasn’t on saving my life. .... I thought about something I’d been told going all the way back to peewee league: If you get hurt, don’t lay there on the ice like a weakling. Get up and go. Get yourself off that ice. Show that you’re tough.

It's a stark example of how damaging toxic masculinity can be. His life is hanging in the balance, and his main concern is not appearing weak.

At the time, I bought into it and considered him a hero — he survived, and came back quickly for his team. He was tough, and toughness mattered.

Life got worse for Malarchuk as time passed, as the stress of his near-death experience festered while he went on appearing tough, and eventually he self-medicated and drank himself near to death — and then there was the night be put a rifle to his chin.

Not to spoil the ending, but Clint Malarchuk lived through it and eventually got the help he needed. He now makes his living as an advocate for mental health issues.

I consider him even more heroic today. Go read it.