St. Louis in Comic Books: A Brief History of Arch Rivals Meeting Under the Arch

When they're not punching aliens through skyscrapers in fictional cities like Metropolis, comic book superheroes generally behave like real-life coastal elites — doing most of their work in New York City and Los Angeles.

But on rare occasions, comic books do acknowledge the existence of other cities, and sometimes that city is St. Louis! When that happens, Martin Casas, co-owner of Apotheosis Comics (3206 South Grand Boulevard, 314-260-1689), takes special note.

"I’m a huge fan, obviously, of our city," says Casas, who's also active in local political circles. For years, he's collecting comic books featuring St. Louis, and he's now highlighting some of those finds in weekly posts to the shop's Reddit and Imgur accounts.

"I like to show my pride, and finding the comic books with St. Louis in the background or mentioned turned into a hobby of mine," Casas explains.

Casas concedes that St. Louis-y comic books are few and far between. While New Yorkers can pick up any Spider Man comic and see references to landmarks and neighborhoods, St. Louis has to make do with "little vignettes."

Frequently, those little scenes involve St. Louis' biggest landmark, the Gateway Arch. For instance, in 1976, the Fantastic Four found themselves atop the Arch battling both The Hulk and — gasp — their own brick-skinned chum, The Thing. On the issue's cover (shown above), astonished sight-seers gape from the Arch's observation deck as the heroes slug it out.

More recently, in 2015, Aquaman grudgingly visited Missouri, which the king of Atlantis ruefully refers to as a "landlocked state," in order to confront an interdimensional temple.

Oh, and the temple's first move is to devour people under the Arch with sludgy black tentacles. (Cool footnote: Casas points out that the Aquaman issue was written by actual St. Louis resident Cullen Bunn.) 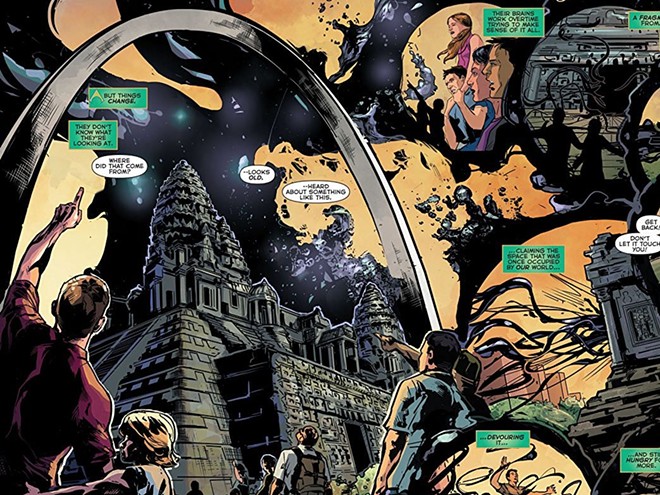 The Arch isn't always relegated to a background prop, though. In a late '70s issue of The Human Fly, the eponymous hero — who had his skeleton sheathed in steel after a car accident, and subsequently vowed to use his daredevilry to raise money for charity — took a motorcycle ride up and down the legs of the Arch and oh boy was he jazzed about it. 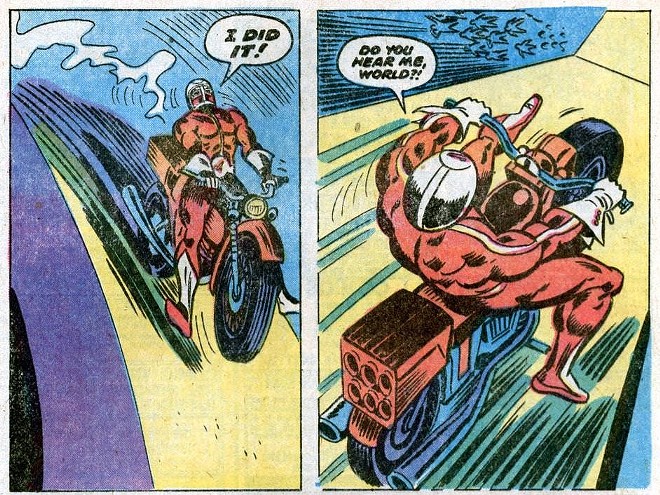 For Casas, the fact that St. Louis is usually reduced to the Arch and little else feels like a missed opportunity.

"A lot of the comics missed the mark. They don't really delve into the history of St. Louis, or talk about the background of it," he says. But at least the Arch is an instantly identifiable feature — when St. Louis made a couple of appearances in the early days of Action Comics in the 1930s and 40s, "you can't recognize it, because there's no Arch there."

Still, St. Louis is more than its Arch. In June 1944, Billy Batson, a.k.a Shazam, stopped by Sportsmen's Park to pal around with St. Louis Cardinals general manager (and eventual Hall of Famer) Billy Southworth.

Notably, Casas also came across a 1989 issue of The Young All-Stars that managed to place its story in St. Louis without once mentioning the Arch — which makes sense, since the story is set in 1942 and involves Baron Blitzkrieg — he's a Nazi by way the way — breaking into a Washington University lab to steal processed uranium.

In real life, that uranium was actually refined in the Mallinckrodt Chemical Works just north of St. Louis, and the resulting radioactive waste was later illegally dumped in a landfill in Bridgeton, and that landfill is currently on fire. 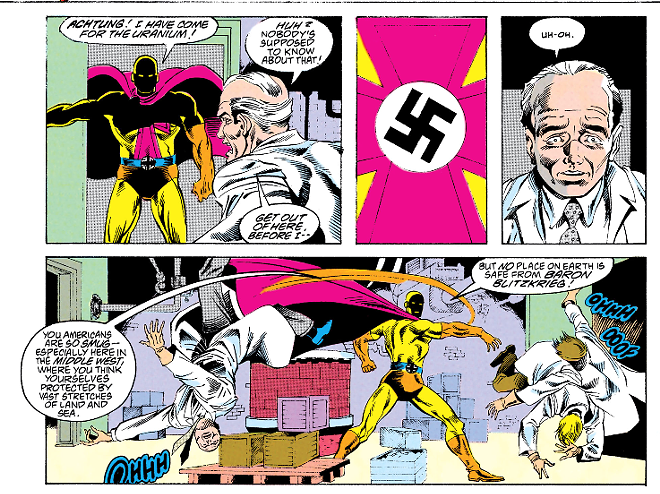 Another example of a comic book going beyond the Arch is a 1994 issue of X-Men that actually drops references to local street names. The issue follows a Blues-jersey-wearing mutant named Synch, who gets told-off by a cop for blowing-out "every single window between Gravois and Grand."

"It's really cool," Casas gushes, "because that's my neighborhood. I assume he was in Tower Grove East."

Can you get more St. Louis than that? Absolutely. A 1989 issue of Archie's Pals 'n' Gals — in which Archie and Jughead embark on a cross-country search for a stolen jalopy — is so remarkably local that it features none other than Joe Edwards, who makes his cameo with all the subtlety of, well, Blueberry Hill.

While Casas continues to add to his collection, he's still waiting for comic books to spotlight St. Louis in more than just a background role. He's holding out for a bonafide St. Louis hero.

"Given our recent history," he says, alluding to protests in Ferguson and in the region, "there's plenty to write, good and bad, with characters in St. Louis. I think there's certainly an opportunity to create one."