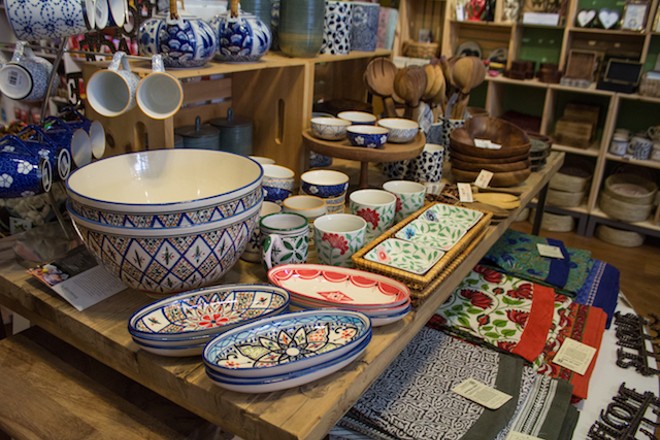 Owner Julio Zegarra-Ballon says he'll be opening the second outpost of his popular fair trade shop next month. At 1,400 square feet, the second Zee Bee Market at 7270 Manchester Road will two-thirds bigger than the flagship location on South Grand, allowing for a greater variety of goods.

"In the world of retail, where you hear how stores are always closing and so many businesses are facing challenges, fair trade is a category people are embracing," Zegarra-Ballon says. Vendors in the movement commit to paying a fair price to makers in third-world countries. "We've seen tremendous growth in the last three and a half years, and that's given me the confidence to expand."

Zee Bee, one of the RFT's "40 Shops We Love" in 2017, opened on South Grand in November 2014. But its story actually goes back to 1990, which is when Zegarra-Ballon moved to the U.S. from Peru. He'd married an American, and they settled in her native Indianapolis, where he took on the first job he could get — which proved to be at L.S. Ayres & Co. The department store was acquired by St. Louis-based Famous-Barr in 1992, and a half-dozen years later, Zegarra-Ballon and his family ended up moving here to facilitate his career with the company.

"I started a career in retail, and little did I know I'd stay employed seventeen years," he marvels.

After Famous-Barr was then bought by Macy's, it closed its local stores, and Zegarra-Ballon got in at Brown Shoe Co. (now Caleres). But the way his Famous-Barr job left him at the mercy of bigger factors made him anxious. "I decided, I am not going to let that happen to me again," he says. "I wanted to launch a business that is going to mature and grow, something to fall back on."

In St. Louis, Zegarra-Ballon was a volunteer for the fair trade organization Partners for Just Trade, and his passion for that cause ended up leading directly to a business idea: a fair trade shop that would sell products from artisans in other countries.

He enrolled at the University of Missouri-St. Louis's MBA program, earning his advanced degree at night while supporting his family during the day. Only then was he convinced he was ready to go for it.

Even so, he started small. He purchased $1,000 worth of fair trade goods, assuring his wife, "If this goes belly up, I promise you, we can replace $1,000." Instead, he sold half the merchandise at the very first event where he set up a table. From there, his mobile retail operation took off, and within two years he launched a website and his brick-and-mortar shop.

One year after that, Zegarra-Ballon quit his day job. And now, barely two years after that, he's eagerly preparing his second location.

A resident of Shaw, Zegarra-Ballon says it was a no-brainer to open his first store on South Grand. "It's already a very internationally minded area," he notes. But for No. 2, Maplewood also seemed spot-on, and when he learned recently that acclaimed restaurateur Ben Poremba is about to open a Moroccan place next door, the location felt even more fated.

Zee Bee's storefront, formerly the home of Femme, is getting a big overhaul, Zegarra-Ballon promises. But no matter what, he plans to have the market's doors open by the third week of April. The grand opening is set for April 21, but there will be a series of ticketed previews in the days before to benefit hand-picked non-profits; like Zee Bee on Facebook or keep an eye on its website for more details.

But don't even think about getting a sneak peek before that. "The windows will be covered until April 21," Zegarra-Ballon says, laughing.