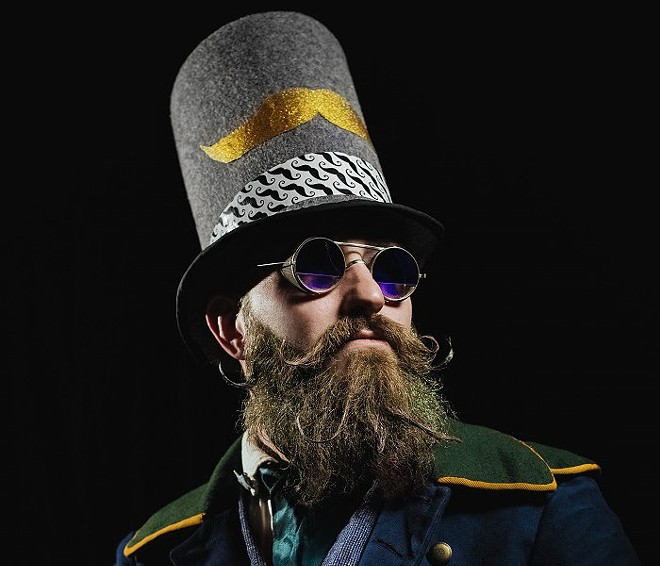 The beard has surged back in fashion after decades of being viewed as the sign of an untrustworthy man or flat-out villain. On any street in St. Louis you're liable to see a Donegal, Garibaldi or Bandholz on the faces of men young or old. For the members of the St. Louis Beard and Mustache Club (SLBMC) the follicular revival has been good for business, and that business is fostering pride in one's facial hair, beard culture in general and performing charitable good works. But to hear current SLBMC president Ben Rumpell tell the story, it all started with a wild hair.

"Richie Darling, it was his idea," Rumpell recalls. "He suggested we start a beard and mustache club back in 2012, so we had a meeting and a few people showed up. We decided to try again, and about 20 people showed up to the next meeting. It's grown from there to about 80 regular members."

Members are required to attend at least one of the club's scheduled monthly meetings and pay their dues ($5). The club maintains an active social life, with special events such as "Beard Prom" and "Beards in the Woods" sprinkled amongst the regular meetings and charitable drives. For Rumpell, it's the community work that drives the club, not the number of members with bushy 'stache or a well-formed beard.

"Our treasurer is a woman, and we have a few women members," he says. "If you pay your dues and do enough charity work, you're in."

"We've been 501c3 organization since the first year," he says proudly. "We've collected toys for kids, coats for the homeless, food for local pantries and we're an active Missouri Stream team. We tried to adopt a highway, but they're all taken, so we have a stream out in Jeff County we keep clean. We just raised funds for Got Your Six Support Dogs, who matches support dogs with vets and first responders struggling with PTSD. I'm trying to lay it out where we have one event every month, or every two months."

Out of all of the charity work SLBMC does, the big event is its annual Meet Me in St. Louis Beard and Mustache Competition, which happens this Saturday, March 24. Members and non-members alike will compete in one of thirteen categories, which includes two categories for ladies in fake beards, a.k.a., the Whiskerinas, and one surprise category that will be announced at the event. It's a stand-alone event, and not affiliated with the National Mustache and Beard Competition. But winners won't leave empty-handed.

"This year we're having wood-ring trophies for the top three finishers in each category," Rumpell explains. "And we've raised more than $10,000 for charity over the four years of competitions." This year's proceeds will go to the Covering House, a local organization that aids survivors of domestic sex trafficking.

If you're not sure which category you should compete in, don't worry. The club will have people stationed at the door to measure beards and 'staches to determine whether you're a Business Beard or Under Eight Inches beard. If you're competing in the Natural Mustache category, you may be a long-shot.

"I don't know if he's coming this year, but we have a guy named Taxi Phil who comes from Cincinnati," Rumpell warns. "He wears a shirt that says 'it's not a 'stache unless you can see it from the back.' And his, you can."