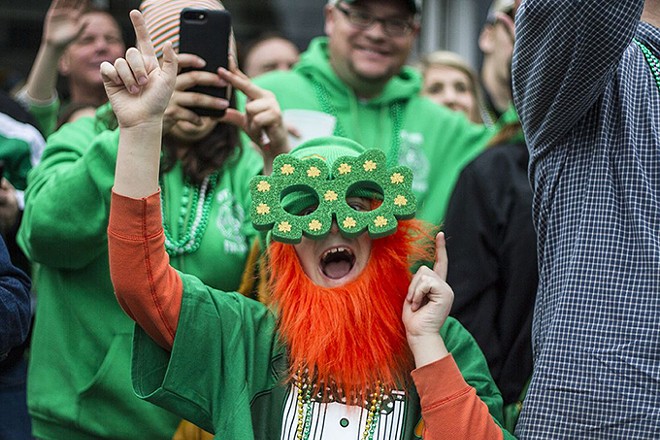 It's been a while since it last happened, but both of St. Louis' big St. Patrick's Day events take place on Saturday this year, leading to a host of changes large and small. We've also got a rundown of all the parties you should visit after the parades.

But if you're not Irish or don't believe in using "party" as a verb, there's still plenty to do this weekend. The Gateway Men's Chorus, Chamber Project St. Louis and two theater companies will be happy to see you, so don't disappoint 'em.

1. Remember the "good old days," when people bought senators and not entire governments?
Harry Brock is in Washington D.C. on business, but then Harry's always on business. The cunning junk man has built an empire of garbage on crooked deals and cut-throat tactics, and he figures the only thing that will further enrich him is if he has a senator of his own on the payroll. As always, his girlfriend Billie has accompanied him, because he and Billie are linked by more than love. But Billie's brash manner and informal education (she's an ex-showgirl) make her a liability in the high-stakes world of government corruption, so Harry hires her a tutor in the form of journalist Paul Verrall. What he didn't count on is that Billie is ignorant, not stupid. Paul's teachings stick, and she recognize Harry is both immoral and dangerous — not like the intelligent, morally upright Paul. Garson Kanin's comedy Born Yesterday was a big hit in 1946, and since our government is still corrupt and easily bought today, all the laughs remain intact 70 years later. The Repertory Theatre St. Louis closes its current season with Born Yesterday. Performances are Tuesday through Sunday (March 14 to April 8) at the Loretto-Hilton Center (130 Edgar Road; www.repstl.org). Tickets are $18.50 to $89.

2. Celebrate the courage of Vedran Smailović.
Ten years ago Chamber Project St. Louis embarked on a noble mission to bring contemporary and classical chamber music to the people. In the intervening years the group has expanded its roster of musicians (and expanded its tonal palette in the process), but the mission remains. At 8 p.m. Friday, March 16, at the Chapel (6238 Alexander Drive; www.chamberprojectstl.org) the ensemble presents Opposition, a program of music about rebellion, hope and waging heavy peace. The centerpiece of the evening is David Wilde's The Cellist of Sarajevo, which is inspired by the actions of Vedran Smailović. The cellist performed for 22 nights in the ruins of a building destroyed during the Siege of Sarajevo, to honor the 22 civilians killed in the explosion. (Smailović in fact played throughout the city for two years during the siege.) Also on the bill are Hendrik Andriessen's Pastorale (a piece inspired by his imprisonment during the Nazi regime in his native Holland) and Shostakovich's Piano Quintet in G minor, Op. 57. Tickets are $5 to $15.

3. And lo, an angel appeared?
The Shakers were a Protestant group who believed in celibacy, gender segregation and the benefits of hard work (the celibacy rule eventually led to a dramatic thinning of their numbers). In rural Kentucky in the 1920s, the hard work is left unfinished when three newcomers to the women's section of the community announce they've been visited by angels. Instead of ushering in rejoicing, these purported visitations spark doubt and disbelief, a dangerous combination in a religious, utopian community. Arlene Hutton's As It Is in Heaven features an all-female cast and single-melody songs, and it explores questions of faith, the plight of women and the nature of belief. Mustard Seed Theatre presents the play at 8 p.m. Thursday through Saturday and 2 p.m. Sunday (March 15 to 31) at the Fontbonne Fine Arts Theater (6800 Wydown Boulevard; www.mustardseedtheatre.com). Tickets are $15 to $35. 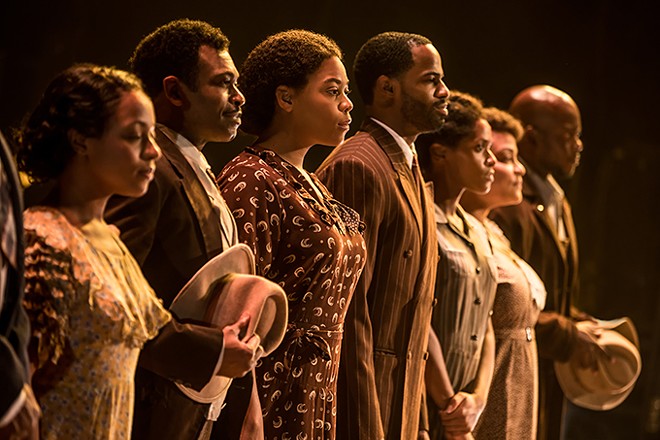 4. A proudly defiant program of modern protest music.
The Gateway Men's Chorus takes a stand for the civil rights of minorities with its spring concert, We Will Rise. The heart of the show is Joel Thompson's sobering composition, Seven Last Words of the Unarmed. Using the structure of Joseph Haydn's Seven Last Words of Christ, the piece takes the final words or communiques of seven black men (Michael Brown, Amadou Diallo, Kenneth Chamberlain, Trayvon Martin, Oscar Grant, John Crawford and Eric Garner) killed by armed authorities and weaves them throughout the music, which incorporates the old French tune "L'homme Armé" (the Armed Man). It is both a protest song and a cry of outrage. We Will Rise is performed at 8 p.m. Friday and Saturday (March 16 and 17) at Union Avenue Christian Church (733 North Euclid Avenue; www.gmcstl.org). Tickets are $20 to $25.

5. It's doubly easy being green.
St. Patrick's Day falls on a Saturday, so St. Louis' twin celebrations fall on the same day this year, and the start times are staggered. Do you realize what that means? You can enjoy both in one glorious, green Saturday.

This year's Dogtown St. Patrick's Day parade is more family friendly, with a 10 a.m. parade start time (still at Tamm and Oakland avenues; www.stlhibernians.com), and an 8 p.m. closing time for establishments on Tamm. The same family-made floats will fill the streets, and outside bottles and coolers are still forbidden — but the neighborhood bars will ensure you won't go thirsty. A Merchant Village on Clayton will feature vendors of apparel and collectibles, and Rusty Nail will be playing live music from 1 to 5 p.m. Admission is free, but you'll need to bring cash and a valid ID if you want to be served.

The Downtown St. Patrick's Day parade has a 1 p.m. start time. It kicks off at Twentieth and Market streets (www.irishparade.org) and will feature more than 130 units and 5,000 people marching. Area businesses will be open, and if you have kids with you, be sure to hit up the Leprechaun village. It has caricature artists, bounce houses and other activities for kids, as well as food for everybody. Once again, admission is free but bring your cash.

6. What are pirates doing in Cornwall?
When it comes to wily pirates, you can forget your Jack Sparrows and Blackbeard — there's only one king of the pirates, and his name is the Pirate King. He's not a bad sort; his crew are all orphans, and so he'll always release any orphans they capture. In Gilbert & Sullivan's The Pirates of Penzance, this character quirk ignites a series of ridiculous events that involves an argument about when an apprentice pirate's 21st birthday occurs, a wily major-general and his many daughters and the inherent love every Englishman bears for his queen. The University of Missouri-St. Louis Opera Theatre presents The Pirates of Penzance at 8 p.m. Friday and Saturday and 3 p.m. Sunday (March 16 to 18) at the Touhill Performing Arts Center on the University of Missouri-St. Louis campus (1 University Drive at Natural Bridge Road; www.touhill.org). Tickets are $5 to $10.

7. It's important to notice purple when you spot it.
Alice Walker's novel The Color Purple has been a bestseller since its release, and the musical based on the book is similarly crowd-pleasing. The show tells the story of Celie, a black woman abused and stifled by the men in her life to the point that she sees no value in herself. But with the love of her sister, and the friendship she develops with her husband's mistress and the other women in her small Southern town, Celie begins to realize that even she is worthy of love and respect. The current Broadway revival of The Color Purple is performed at 7:30 p.m. Tuesday through Friday, 2 and 7:30 p.m. Saturday and 1 p.m. Sunday (March 20 to April 1) at the Fox Theatre (527 North Grand Boulevard; www.fabulousfox.com). Tickets are $25 to $85.