At Dogtown's St. Patrick's Day, the Party Will Start Even Earlier This Year 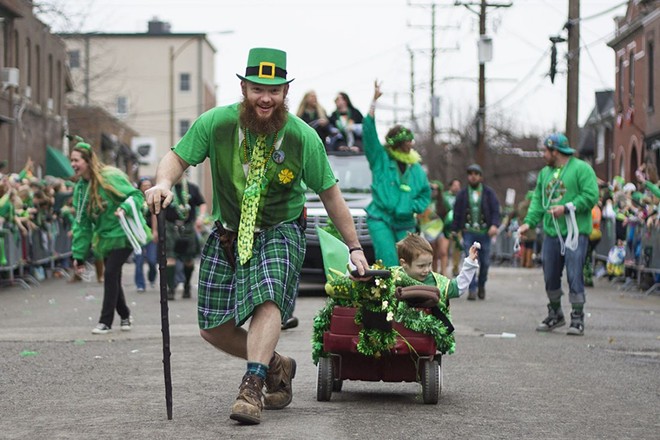 Dogtown's St. Patrick's Day celebration will be a little bit different this year — and for that you can thank St. Louis' public safety department, the area's new business association and the calendar.

Traditionally, the St. Patrick's Day parade through downtown St. Louis is held the Saturday before March 17 — which, in 2018, becomes March 17 itself. That parade begins at noon. The parade through south city's Dogtown neighborhood is always held on March 17, and it traditionally begins right at 12:30 p.m.

And with the overtime budget for cops already depleted, that became a potential concern. Jim Mohan, a spokesman for the St. Louis County Ancient Order of Hibernians, which mounts the Dogtown parade, says the group was approached by the public safety department about possibly switching things up this year.

They were happy to comply.

"This only happens once in a while that both are on a Saturday," he explains. "So, we're going to try it and see how it goes." To accommodate the city, Dogtown's parade has moved earlier, with a 10 a.m. start time. Downtown's moved later, with a 1 p.m. beginning.

For the Hibernians, the earlier hour may well come with a bonus benefit: a more family-friendly atmosphere. After all, much of the parade itself is comprised of the city's Irish clans, marching together no matter what their age. "People enjoy themselves on St. Patrick's Day; we're not trying to put cold water on that," Mohan says. "But we want this parade to stand for something. This is St. Patrick's feast day, and we want to go back to the families."

That's not the only change. The Dogtown United association, which was formed to promote the businesses within a neighborhood that straddles several official city designations, is also hosting for the first time this year the Dogtown Irish Festival, featuring an Irish village. After the parade, Tamm Avenue will be blocked off from Nashville to Berthold, allowing vendors to sell food, drink, arts, crafts and Irish gear. A stage will host live music, with Rusty Nail taking the stage from 1 to 5 p.m.

Admission to the village is free, although attendees should bring money to support the vendors. Sales will continue until 6 p.m.; after that, the bars in the area will serve for another two hours, with last call just before 8 p.m.

Since this is the first year for the festival, Mohan says the organizers expect there to be a few kinks. But if it does well, it's something they'd like to bring back. "We're really kind of getting our feet wet," he explains. "Hopefully next year we'll expand, and not just be bigger but better."

Next year, the parade may well move back to its original start time. But don't expect its location to change — not then, not ever, if the Hibernians have anything to say about it. Their parade is now on its 35th year in Dogtown, and after one year in Clayton and the second one in Hazelwood, they feel confident they've found their forever home.

For Mohan, the area's narrow streets and low-key vibe provide just the right feel. "The floats in this parade are all homemade floats, made by the family clans," he says. "It's ingenious what they come up with. It makes it more like the parades they had in Ireland in the 1800s — the pubs used to be closed in Ireland on St. Patrick's Day. It was a holy day. You'd end up at the church and have a festival." Expect this year's Dogtown bash to be something like that .... only no church and plenty of beer.