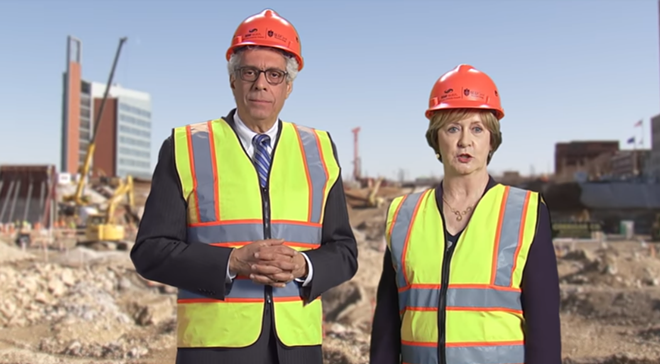 Saint Louis University is asking for the public's help in choosing a new name for its redevelopment district.

In partnership with SSM Health, the university has made recent strides toward expanding and developing the half-mile stretch between its Midtown-based north and south campuses. Those efforts have brought two new residence halls and the SLU hospital and outpatient care center to the area, with more exciting developments on the horizon — to the tune of a billion dollars' worth of construction, according to a video promoting the project.

With all the excitement, the good people at SLU decided a new name for the area was in order, asking for the public at large to vote on their favorites. At present they have four names on the ballot:

Option 1: Prospect Yards
At the turn of the 20th century, the area west of Grand was known as the “Prospect Industrial District” and was home to many businesses and an extensive rail yard.

Option 2: The 1818
Eighteen rail lines used to run under the Grand bridge, connecting St. Louis to the nation. In addition, 1818 is Saint Louis University’s founding year.

Option 3: The Circuit
This name hearkens back to the area’s rail yard history and acknowledges the prominence of power lines there today.

Those are fine, sure. But the good people of SLU also left a write-in option open — leading us to believe we could do better.

Here are fifteen more options from your pals at RFT:

Feel free to use any of those, or come up with your own! It is unclear how long the polls will be open, but if recent history tells us anything about asking the internet for help with naming things, Midtown residents can definitely look forward to spending time in the dazzling new "Schooly McHospitalface" district.

Watch a video about SLUGRAVANCHO below: