Thanks to the St. Louis Curling Club, Your Olympic Dream Can Live On

The 2018 Winter Olympics may be over, but your dream of becoming a world-class curler is just beginning.

The sport that everybody loves but nobody understands has earned a cult following in the Gateway City, and the St. Louis Curling Club is here for it. Becca Walters, curling club president, tells Riverfront Times that interest has grown steadily since the club's inception in 2010 but has exploded with this year's Winter Olympics, during which the U.S. men's team captured the gold medal.

"By the end of that first [Olympic] weekend, we had already filled all of the 'Learn to Curl' dates we had posted on the website, and that was about 400 spots," Walters marvels.

Even St. Louis Cardinals pitcher Adam Wainwright is a fan: 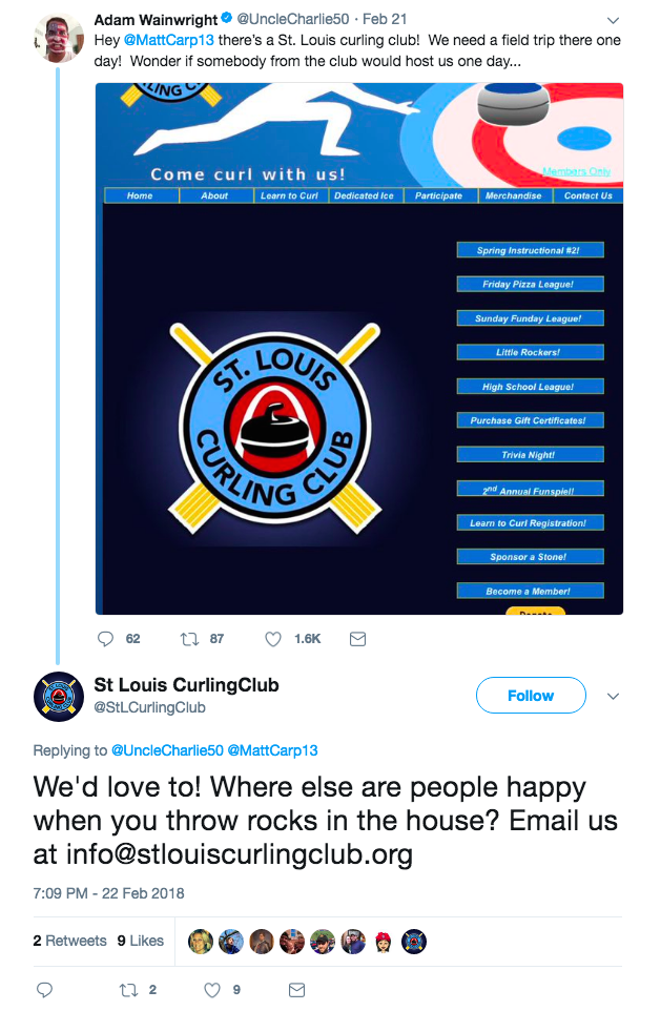 If you didn't know that St. Louis has curling experts with mad skills, you're not alone. But with more than 65 members in the local club and an official tie to the United States Curling Association, St. Louis Curling is poised for breakout success.

"None of us knew how the Olympics would impact our club — if St. Louis was into curling or not into curling," says Walters, who curled in Seattle for seven years before moving to St. Louis with her husband. "The last three seasons, we've had 250 people on average come learn to curl. We thought with the Olympics, 'Maybe we'll have 500 people this year?' But it's looking like we'll be over 1500."

One reason curling has become such a phenomenon is the sheer novelty. Watching players launch heavy stones and "scrub" the ice on TV is fascinating and, as locals have discovered, actually playing the sport requires no profound athletic ability. Your dream of becoming an Olympian lives on!

"You'll see — some of our members aren't so athletic," Walters laughs.

RFT put this theory to the test during one of St. Louis Curling's "Learn to Curl" sessions at Creve Coeur Ice Arena, tucked away behind a business park south of Olive Boulevard. With about 100 eager would-be curlers at the sold-out Saturday-night event, we put rubber grippers over our shoes and used our weak Bugs Bunny arms to throw a 42-pound granite stone down the "sheet" — the 138-foot-long skinny section of ice in play. We later swept the ice with our padded curling brooms, smoothing the path in front of the traveling stone to make it fly further toward its target.

Most novices on the ice progressed at throwing and sweeping fairly quickly, thanks to instruction from Walters and other St. Louis Curling members, and adult participants were of every age and body type imaginable. By the time the two-hour session was over, teams were high-fiving and talking smack, convinced that curling could be their final ticket to Olympic stardom.

For that to happen, though, St. Louis Curling needs a dedicated facility. The organization squeezes ice time into Creve Coeur Arena's schedule, but with the current roster of hockey, figure skating and open skate sessions, curling availability is severely limited. Walters says that St. Louis Curling is raising funds for its own rink, hoping to be the only curling facility within a 200-mile radius soon.

"We only get the times that the arena has available. With the Olympic response, we called the rink and asked, 'Is there any more ice time at all that you can give us?'" Walters says. "We're looking for a warehouse and also are thinking about building because it's hard to find a warehouse that has space for parking 75 cars."

If the club can secure a rink this year, it would be able to host enough classes for St. Louis' growing curling appetite as well as national USA Curling tournaments and Olympic training. With a funding influx, a couch potato's athletic dreams could be just a granite stone's throw away.