Plenty of women work right up to the day they give birth — but Cassiday Proctor took it a step further yesterday: The 106.5 the Arch morning host actually gave birth live on the air.

But not to worry — the airwaves were not filled with the sounds of blood-curdling screams. Proctor had a Caesarean.


Scott Roddy, program director for the Arch, says that the nine-months- pregnant Proctor worked Monday, and started to experience labor pains. But the baby was breech, and it became clear she was going to need a C-section.

At that point, the show she works on, Spencer's Neighborhood, sprung into action, coordinating with the hospital to have the nurses hold up a phone during the procedure. A seven pound six ounce baby boy arrived around 7:45 a.m., right in the middle of the morning drive-time. 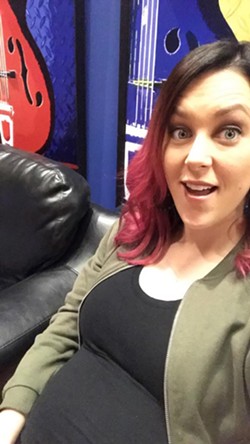 Laughs Roddy, "As a program director, I was very happy about that timing."

Proctor never hesitated about involving her workplace in the birth of her first child, Roddy says. "She was all about it," he says. "She shares everything. That's who she is."

And Proctor's husband is clearly a good sport. Not only did he allow the birth of his first-born to be broadcast on the airwaves, but he'd previously allowed Spencer's Neighborhood listeners to name the lad.

Says Roddy, "We did an old-fashioned bracket challenge on the air," with twelve silly names and twelve names chosen by the couple competing for one slot.

Fortunately for Proctor and her husband, viewers didn't opt for a goofy option. "We kept voting until we got to Jameson," Roddy says.