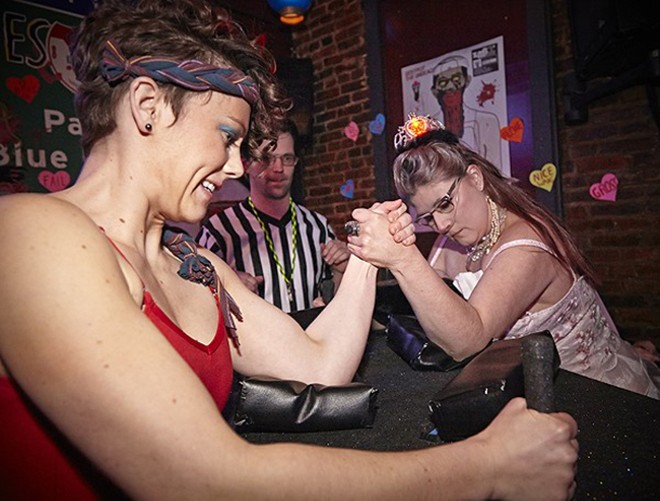 Black History Month continues apace, with several new events happening this weekend. Also on the schedule: at least one more Valentine's Day event, which is not a bad thing — some people probably forgot it was happening. Throw in a few art openings, a musical performance and a lady fight and you have a full week.

Here are this week's picks for the best things to do.


1. See what printmaking's Dark Prince has been making
For decades, St. Louis artist Tom Huck has been delighting and revolting the masses in equal parts with his beautifully grotesque woodcut prints. From his Evil Prints outpost on Washington Avenue, Huck creates incredibly intricate, satirical images that call to mind the best of the Garbage Pail Kids as passed through an Albrecht Dürer filter. His latest show, Electric Baloneyland, catalogs the downward trajectory of American society through the lens of a county fair in Huck's patented confrontational style. The exhibition makes its St. Louis debut this week with an opening reception from 5 to 8 p.m. Friday, February 16, at the Duane Reed Gallery (4729 McPherson Avenue; www.duanereedgallery.com). The show continues through March 31.\

2. Enter the chamber — the Ritz Chamber
Classical music has benefited from the rise of talented musicians of Asian descent for several decades now, but black musicians are still a rare sight in the concert hall. The Ritz Chamber Players is an all-black group founded by clarinetist Terrance Patterson, one of several African American chamber ensembles establishing beach heads all across the world. The group performs at the highest level, proving that only talent and perseverance matter in classical music, not the color of your skin. Tonight at 7:30 p.m. Friday, February 16, at Washington University's 560 Music Center (560 Trinity Avenue, University City; www.edison.wustl.edu). The Ritz Chamber Players presents a program that includes Debussy's Sonata for Flute, Viola and Harp and black composer Coleridge-Taylor Perkinson's Movement for String Trio. Among the players on stage will be Washington University faculty member Kyle Lombard (violin) and the grand dame of harpists, Ann Hobson Pilot, who played with the Boston Symphony Orchestra for 40 years. Tickets are $10 to $20. 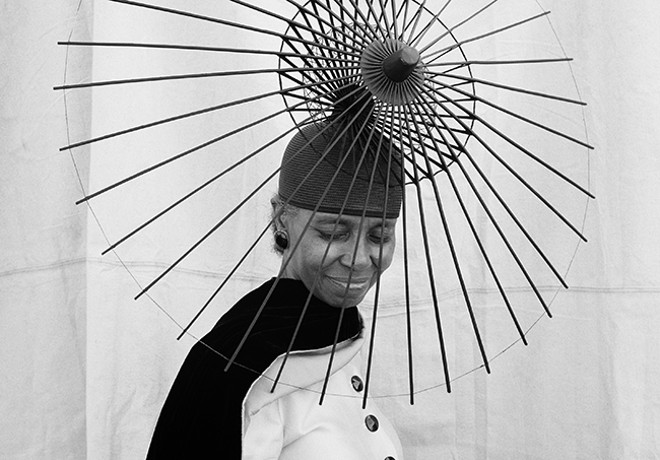 3. Consider what you wear as your personal art
Harlem preservationist Lana Turner is known for her collection of vintage fashions, among many other things. St. Louis-born artist Dario Calmese originally wanted to photograph her numerous hats, but quickly realized that Turner's personal style (she believes dressing is an artistic medium) should be captured in whole. Calmese photographed her in her Sunday best, tapping into the long black church tradition and Turner's own recreation of her identity through her savoir faire, which he fixed in black and white images. Calmese's photographs of Turner are partly theatrical, partly a statement of black identity, and they comprise his new exhibition, Dario Calmese: amongst friends. The show opens with a free public reception from 5 to 8 p.m. Friday, February 16, at Projects+Gallery (4733 McPherson Avenue; www.projects-gallery.com). At 1 p.m. Saturday, February 17, Calmese and Tuner discuss their collaboration at the gallery. Dario Calmese: amongst friends. remains up through March 31, and the gallery is open Wednesday through Saturday.


4. SLLAW is the law
The St. Louis Lady Arm Wrestlers (SLLAW) combine the theatricality of professional wrestling with the over-the-top power of Sylvester Stallone's character in cult film Over the Top. These hand-grapplers wear outlandish costumes and develop wild personae to aid them as they test their strength. The Masquerade Brawl is the group's first bout of 2018, and it features old favorites such as Lucille Brawl, Surly Temple and Betsy Boss, as well as some new competitors. The Masquerade Brawl starts at 9 p.m. Saturday, February 17, at the Heavy Anchor (5226 Gravois Avenue; www.sllaw.org), and poet/bassist Tonina provides the halftime show. Admission is $10, but cash to bribe competitors is often useful. Proceeds benefit the Center for Women in Transition.

5. This one's for the ladies — and only the ladies
Galentine's Day, as all fans of much-missed sitcom Parks and Recreation know, is the fictional holiday for ladies to celebrate their female friends. But if you were to celebrate it in the real world, then it would eventually be recognized as an actual holiday. And so GutterGlitter presents the Galentine's Day Massacre from 9 p.m. to 1 a.m. Saturday, February 17, at Community Arts and Movement Project (3026 Cherokee Street; www.stlcamp.org). This queer dance party and drag show features performances by Mustache Daddy, Diamond Devereaux and Roxie M. Valentine, with Maxi Glamour hosting. Admission is $5 "for quierdos" and $70 for cis men.

6. Die, die my darling!
Valentine's Day is touted as a day of romance and tender feelings, but that's not everybody's idea of love. Some people feel a descent into the realm of horror, madness and nightmares is what love is all about (we call them "married people"). Famed haunted house the Darkness (1525 South Eighth Street; www.scarefest.com) is newly renovated, and it will be open tonight for My Bloody Valentine's, the perfect day for those who can only say "I love you" while screaming. Terror Visions 3D and Zombie Laser Tag are part of the deal, but only the first 500 people will be allowed entry. My Bloody Valentine's runs from 7 to 11 p.m. Saturday, February 17, and tickets are $25.


7. Meet the "me" in #MeToo
Tarana Burke founded Just Be Inc. in 2006, to help young black women empower themselves to grow up and become resilient and confident women. At the same time, Burke began the Me Too movement, helping girls who had been victimized by sexual abuse know that they are not alone with their pain, and that in time they can overcome it. Me Too became a slow-moving wave that recently gained speed as a rallying cry for women of every color and walk of life, because misogyny and sexism don't discriminate. Burke will be in St. Louis to deliver the Black History Month lecture at Webster University's Loretto-Hilton Center (130 Edgar Road; www.events.webster.edu), and the event is open to the public. Doors open at 6 p.m. Monday, February 19, and admission is free. 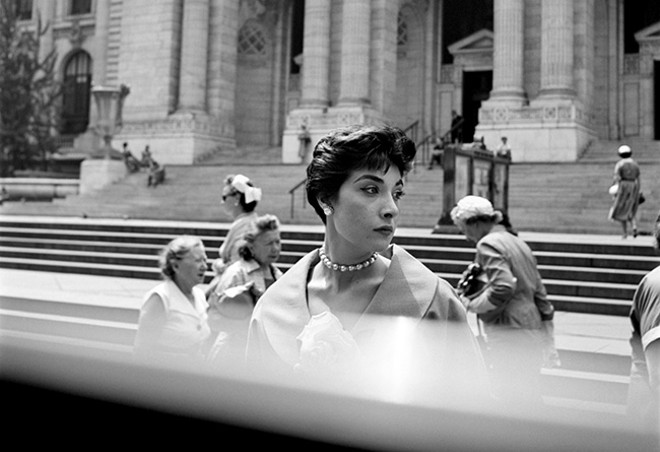 8. Visit the secret world of an unknown artist
Vivian Maier burst onto the art scene in 2007 with her treasure trove of urban photography. It was quite a feat for an 81-year-old, but even more so because most of her work was of mid-century New York and Chicago, and she had ceased making images a decade earlier. Also, she didn't ever show her work herself; filmmaker John Maloof bought a crate of negatives at auction and in it discovered her vast archive. He has spent years printing and scanning these negatives to bring her work to the public eye. Vivian Maier: Photography's Lost Voice, the new exhibition at the International Photography Hall of Fame and Museum (3415 Olive Street; www.iphf.org), offers St. Louis the rare opportunity to see Maier's work up close. The show includes her black-and-white urban images, her later color abstract work and examples of her landscape portraiture. Vivian Maier: Photography's Lost Voice is on display Wednesday through Saturday (February 21 to May 26). Admission is $3 to $5.

With reporting by Daniel Hill