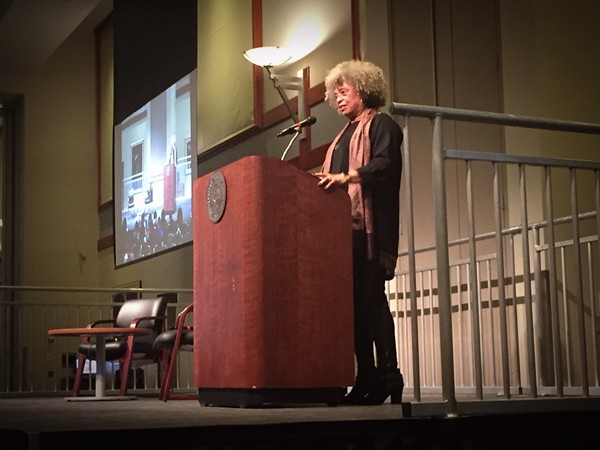 Yesterday was the confluence of three major events: Valentine's Day, Ash Wednesday and the return of Angela Davis.

The legendary political activist had visited St. Louis just last month to give a speech at Washington University's Graham Chapel. That small venue couldn't handle the abundance of public interest, though, and many were turned away at the door.

News of these disappointed fans had clearly gotten around, because there were plenty of people queueing hours in advance of Davis' speech last night to secure their spot in the audience at Saint Louis University's Wool Ballroom.

Davis entered the large room to a standing ovation and spoke on freedom in relation to humanity, the whitewashing of history and the importance of working as a community. She then took questions from the audience in a well-organized Q&A hosted by the Black Student Alliance.

She credited the protesting done by St. Louisans as the "inauguration" of the 21st century civil rights movement and spoke about how Black History Month is important not because it aims to shine a light on the accomplishments of any individual, but because it's about "the uplift of the community." Davis said she sees Black History Month as celebrating "the accomplishments of people who unrelentingly refuse to surrender." She went on to explain very clearly: "Black history in the United States is the history of the United States." 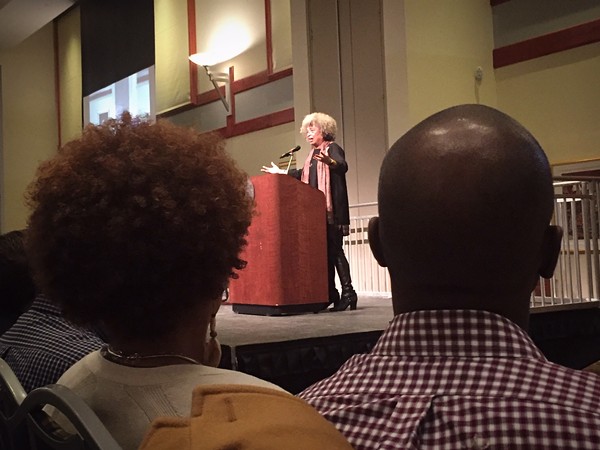 Davis had a few things to say about our current situation, of course ("justice dictates dropping all consideration of a wall"), but she also had an outline for the future.

"I think we should be talking about radical change," Davis said. "Revolution, even. Structural change."

Many of those in the audience couldn't agree more. In fact, some of the people in attendance at her speech were just as inspirational as Davis herself. From poets to educators to activists, it was a room full of influencers who had been touched by Davis' work over the years.

Attendee Jewel Stafford was looking to Davis to help build a guide for social justice causes in the future. She told the RFT:


I am a young black woman living in a community that is constantly being impacted by social justice, residential segregation and all of the impacts of the new Jim Crow. And I think it's important for us to think and listen to our previous civil rights leaders and Black Panthers leaders who really helped to shape and navigate the way that we're experiencing social justice movements now. And so if she can offer any insights, any thoughtful suggestions or even give us strategies, I think it will be beneficial, especially given the Ferguson Commission Report and our connection to the Michael Brown murder.


And Grace Calliahan explained that she was hoping some of the ideas discussed can spark change in the community:


I recently moved to St. Louis and there are a lot of problems here. I was trying to pursue my dreams in Hollywood and I had a job and it was great but then Trump got elected and I was thinking maybe we need to do something that is less self-centered. So I joined AmeriCorps and I moved here to St. Louis. I'm currently working with College Bound, who helps low income kids get to college and then coaching them through college and increasing their graduation rate. And so I'm looking to learn as much as I can from the people here about how St. Louis got to be so racially segregated and how the systems got broken. And if there are thought leaders who have ideas, I need to know that so that I can push that forward into my little piece of the world.


These locals are hard at work building foundations for structural change. Angela Davis should be very proud about the way her legacy is living on in St. Louis.