With Living in Tents, Filmmaker Paul Crane Tells the Story of an STL Homeless Camp 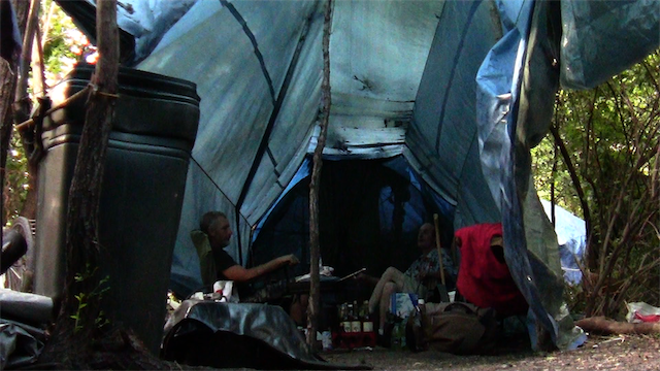 Tucked away on the banks of the Mississippi River, in the shadows of the Edward Jones Dome, once sat Tent City. The little-known homeless community existed in St. Louis from 2010 to 2012. Now filmmaker Paul Crane has captured the day-to-day lives of residents and volunteers in his documentary Living in Tents, set to premiere next week at the Tivoli Theater.

Like most people who live in St. Louis, Crane had never even heard of Tent City until he came across it while driving around. "You had to know about it to get there," says Crane of the camp. The Olivette native had been looking for places to capture for a photography class he was taking at St. Louis Community College; instead, he found a subject for his first feature film.

In fact, Crane was so captivated by the camp's stories that he actually moved in himself part-time in January 2011, hoping unfiltered access would help him capture the lives of its residents.

Having just started out in filming, Crane says he was a little naive when the project began. "I was eager to have the experience, but I wouldn't do it again," he says. Still, he credits the experience for opening his eyes to issues surrounding mental health and the programs the city has to help homeless individuals — even as it made him question the idea of homelessness in general.

Living in Tents follows five residents and two volunteers of Tent City, which was founded after its residents were kicked out of a different encampment in a railroad tunnel.

The homeless community in the camp was very much that — a community. "The community aspect is really what made it desirable," says Crane, who is now 34. For him, the camp was filled with "good vibes," and for the most part, people were friendly. During its two-year existence, Tent City was an experiment in self-governing and alternative lifestyles. Three smaller, separate camps made up the city, each with a person seen as its leader while others pitched in with various tasks to help keep their camp running. 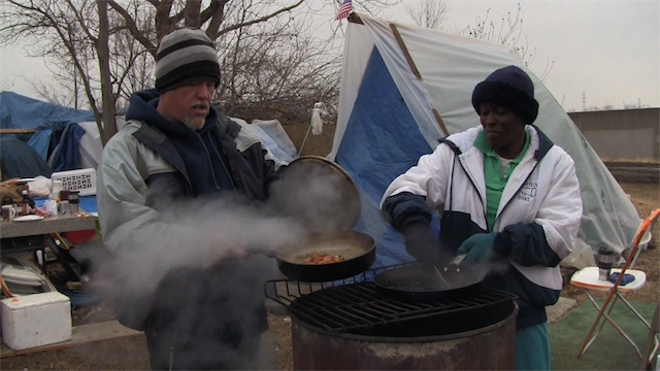 Crane spent most of his time in the camp known as Sparta, and found that many who lived there preferred this style of living to being on the streets or in homeless shelters.  In fact, many did not just prefer it, but had chosen it. Crane met one resident who had moved into an apartment, but not too soon after was back on the streets. The film raises a surprising question: Does society need to rethink the idea of homelessness as a problem? And are there other ways to help those who choose to live differently than we do?

As for the volunteers helping the camp, they not only brought supplies, but also provided companionship that connected the residents to the rest of society. In the trailer for the film, a resident named Blake describes two of the volunteers as mother and father figures.

"People are not surviving on their own," says Crane of Tent City's denizens — something that became more evident as the years passed. 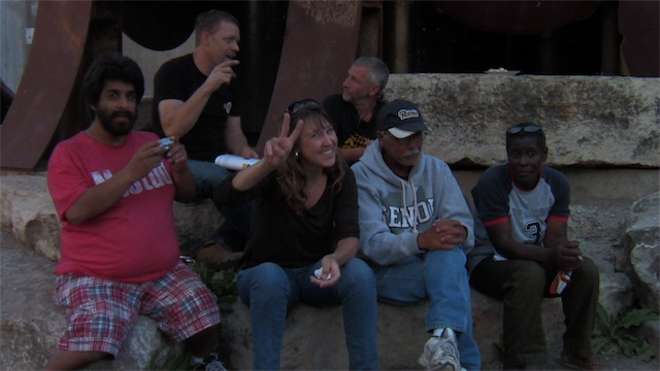 While things started off well enough, Tent City was plagued with issues. Crane describes it as self-imploding, saying that crime and violence began to occur more often. When the city shut down the camp in 2012, it was easy to assume that was the reason, although Crane claims city leaders were always intent on putting a stop to it.

However, the city did not simply kick out the residents. Instead they raised enough private money to put everyone up in an apartment for a year. Although intentions were good, Crane says he is aware of very little, if any, job training. Crane kept up with a few of the residents after the encampment was closed and says it's interesting to see who went back to streets. He wonders how much good moving them out of their chosen lifestyle accomplished.

Living in Tents depicts an in-depth look at homelessness in St. Louis, letting viewers get to know people they might rather look past. The film will premiere at the Tivoli Theater on February 22. It is a free event, but donations of socks, shoes, hand warmers, and other necessities are appreciated.

See the film's website for more details, or watch its trailer below.