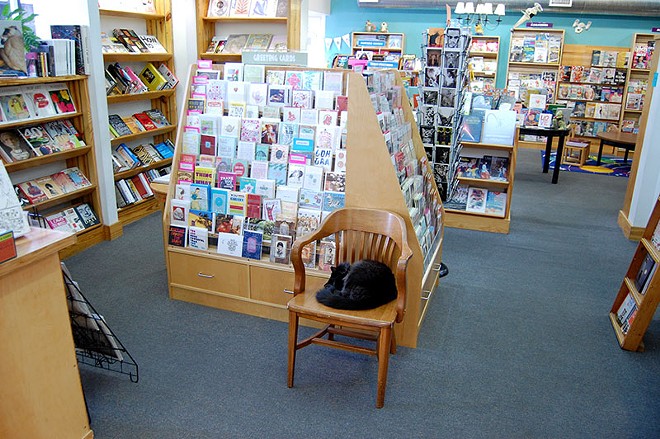 If you've ever spent time at Left Bank Books — or even just walked by with a particularly alert breed of terrier (ahem) — you are likely familiar with Spike, the bookstore's in-house cat.

That's because Spike is the kind of feline who brooks no nonsense. He naps where he wants to nap. He goes where he wants to go. He will not come no matter how much your needy two-year-old calls him (again, ahem). He rules the roost, and while Kris Kleindienst and Jarek Steele may be nominally the shop's co-owners, Spike is really the cat in charge — even if you're a critically acclaimed author. And even if you've flown in from New York for the express purpose of sharing your new book.

Author Morgan Jerkins learned that lesson last night. Jerkins was at Left Bank to promote This Will Be My Undoing, which, in the words of her website, weaves "incisive commentary on pop culture, feminism, black history, misogyny and racism with her own experiences to confront the very real challenges of being a black woman today." But instead, Spike gave her a crash course in the interspecies ubiquity of the patriarchy. Quelle horreur!

The evening got off to a great start:

Then she started her reading. And that's when the cantankerous black cat made his presence known:

Tonight, while I was talking about my book, I saw something moving in the audience and got nervous. I saw a tail and was like umm what? Somebody?

Then a black cat emerged. His name is Spike, named after Spike Lee. I laughed so hard at his interlude.

He had to be the star of the show. Disrespectful ass cat. But he's a stunner so I get it. Spike does what he wants and we just have to deal. https://t.co/8GQx3qgRpj

But then she got to thinking. And at heart, what was Spike's interruption but one more dude needing to make it all about him?

I still can't believe Spike the cat interrupted my speech last night. You see, ladies? It doesn't matter the species the male is in--homo sapiens, felis silvestris--he's always gonna try to center himself for five seconds.

As Jerkins writes, "It doesn't matter the species the male is in — homo sapiens, felis silvestris — he's always gonna try to center himself for five seconds."

Oh, Spike. You couldn't give cede the floor for one hour? Is it always all about you??

(Maybe don't answer that. Male or not, Spike is a cat.)