For Dario Calmese, Projects + Gallery Show Is a Homecoming

This Friday, Projects + Gallery (4733 McPherson Avenue, 314-696-8678), will host the opening night for Amongst Friends, a photography exhibit by St. Louis native Dario Calmese. The show is one of Calmese's first solo shows in the U.S. and his first in hometown.

Calmese grew up in Hazelwood and attended Hazelwood West High School, where he got involved with theater in seventh grade — an experience he credits with sparking his appreciation for performance and art. He began his professional acting career at the Muny, where he continued to work during the summers during college.

After graduating Rockhurst University, where he received a B.A. in psychology, Calmese moved to New York intending to continue acting, with an idea that he'd attend graduate school if things did not pan out — photography was not a part of that plan.

But then, on a trip to Europe, he began taking photos. As he became more familiar with a camera, he saw photography as a way to bridge his interests in psychology and the arts. "I saw education and art as two different silos, so I thought I would get a more stable degree," he says. "Photography worked with my analytical mind and was a medium that could combine all of that." In 2012 he graduated from the School of Visual Arts in New York with a master's degree in fashion photography.

While Calmese thinks of St. Louis as a place that "provided an environment where arts was appreciated," much of his artistic influence comes from his family. Calmese comes from a family of artists. His father dabbled in photography, his mother was a seamstress and his grandmother worked as an artist. His father also served as a pastor. During his childhood, Calmese spent every Sunday, and even some Wednesdays, at church. Although he jokes about attempting to get out of going at times, the influence of church — and church fashion — has carried over into his adult life and into his work. 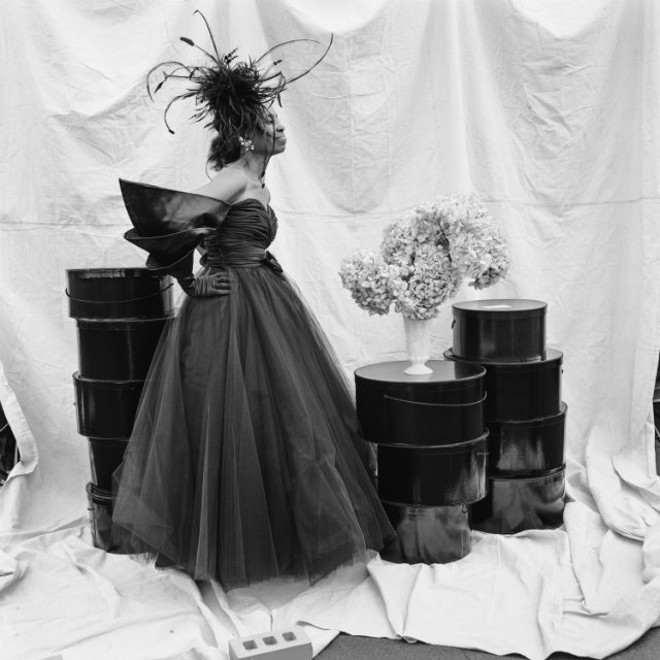 Amongst Friends highlights the African American church as a "crucible for the construction of the self," Calmese writes on his website. The show marries the black church, fashion and art.

In the collection he styles Harlem socialite Lana Turner from her own closet. Extravagant hats, smooth gloves and gorgeous hand bags fill the black and white canvases. Calmese writes briefly about how in the process of dressing for Sunday service, Turner "abstracts herself."

And in that, he recalls his own mother. "That Sunday, Saturday night ritual of laying out church clothes, of shopping with mom and getting to pick out what I wanted to wear," he recalls. "Even late nights watching my mother sew. These images are really memories of my mother." People would know his mother from a block away because of her style, he says.

St. Louis has changed for Calmese since he left. He points to events such as the shooting of Michael Brown, which brought national attention to the racial divide in the city. "When I come back to St. Louis, I'm with wealthier St. Louisans and their number one concern is how to bridge that gap," he says.

Fashion, Calmese believes, is the bridge that the city needs. He hopes his exhibit serves as a sort of intervention to bring black St. Louisans into an art gallery that maybe they felt wasn't theirs. "It's quite unique, the way America has covered up, or been dishonest," Calmese says of the country's racial history. "It's something I look to conquer in my work."

Calmese has traveled and shot photography all over the world. His first solo exhibit was in Turkmenistan, in Central Asia, and now he's branching out in U.S.. Amongst Friends will be showing at Projects+Gallery until March 31. As one of his first solo exhibits in the United States, Calmese says, "It's great it's starting in St. Louis because that's where it started for me."

For the art community and those who happen to wander in, the exhibit is a fascinating piece of self expression through fashion. For Calmese, it's a homecoming.