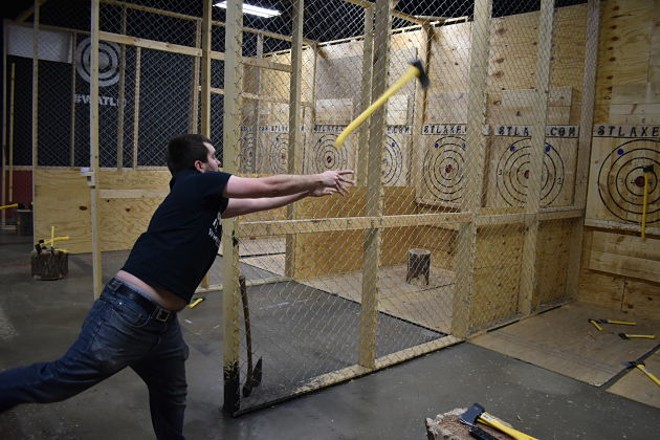 Sometimes, when hurling potentially deadly bladed weapons across a room, it helps to be angry. At least that’s what Aaron Cockrell says. Dual-wielding two full-sized axes over his head — one in each hand — he’s fired up as he steps forward and launches them simultaneously at a 36-inch-wide target painted on a piece of wood. Each takes a full rotation before hitting the target, but neither sticks. “OK, too angry,” Cockrell laughs as he retrieves the blades. The dual misses don’t seem to bother him too much. Maybe he was just showboating. And besides, his first shot of the day — one with a single, smaller axe — was a dead-on bullseye.

Cockrell is showing off his one-year-old business, STL Axe Throwing (1862 Scherer Parkway, St. Charles; 888-321-2937), on a recent Wednesday afternoon. Tucked away in a small strip mall just next to the Wehrenberg 18 Cinema in St. Charles, he’s created a destination dedicated solely to the art of whipping heavy bladed weapons through the air — for fun.

“We play darts with the axes,” he explains matter-of-factly. “It’s a great time.”

STL Axe Throwing is the first business in the St. Louis area dedicated to the burgeoning sport. It originally opened last March, but recently saw a rebuild of its interior that made space for five separate lanes of razor-sharp airborne fun.

Cockrell says he got in on the action early.

“We were the first one in the state of Missouri; we’re number six in the United States,” he explains. “Now there is about 45 or 50 I think.”

Crazy as it may sound, axe throwing is a relatively new leisure pursuit that traces its roots to Canada, where lumberjacks frequently work on their throws between felling trees. It’s also popular among firefighters, who tend to have the requisite tools on hand. Cockrell, 27, falls under the umbrella of the latter, having worked as a fireman in Texas and Tennessee from 2009 to 2014 before making his way to St. Louis. A trip to Korea to visit his father, who was serving in the military, inspired him to make a change.

First, though, he tried his hand at a different kind of leisure activity: escape rooms.

“I saw one over in Korea — you know, many years back there was nothing like it,” he explains. “I was looking for something fun to do, and was like, ‘I think that would do great here.’ Opened up, I was the first one out here in St. Charles, number three in the entire metro area. And the first three of us opened up within about a month of each other, so....”

Cockrell opened Cracked in late 2015 in St. Charles, and about a year later expanded to a second location, Adventure Time, in St. Louis. But by then the market was getting crowded.

“Everyone and their brother has opened up an escape room,” he explains. “There’s 40 or so in St. Louis now. I don’t wanna compete with everyone else. I’ll go do my own thing. I’ll go beat my own drum, have my own fun. They can all compete over the same customer base.”

Through that experience, though, Cockrell became certain that fighting fires was not his calling. ”I realized I enjoy making people laugh and giving people a good time instead of seeing everyone on their rough days,” he explains. Rather than return to the job, Cockrell drew on his firefighter roots for his new source of fun — and with that, STL Axe Throwing was born.

The business thrives as a unique venue for team-building exercises, as well as an off-kilter destination for bachelor and bachelorette parties. Reservations must be made in advance, and time is purchased in two-hour blocks at $35 per person. There is even an axe-throwing league that is about to start up again for the season. Cockrell is himself an encouraging presence, adding to the relaxed atmosphere. He says that throwing axes is only half of it — the rest is a show.

“Bachelorette parties are kind of my favorite,” he says. “Half the time I end up in a giant inflatable penis costume.”

The business is currently in the process of securing a license to sell beer and wine — liquor is out, obviously, as no insurance company in their right mind would take on the risk that comes with doing shots while hurling potentially deadly weapons across a room. Cockrell hopes to have that squared away soon, but he says St. Charles City Hall has been having a difficult time deciding how to categorize his business, since it is clearly not a bar or restaurant.

But with the speed at which the sport is growing, he doesn’t think that confusion will last long. In fact, another axe-throwing spot has already opened in the St. Louis area, in Valley Park, called the Axe House. That location is run by firefighters as well.

“I think in the next eighteen months it’s gonna be like escape rooms and there’s gonna be about six or seven companies here in St. Louis,” Cockrell predicts before boasting competitively: “They can follow my lead, they can copy my name, they can do whatever they want. They won’t beat me.”

As he walks across the room to retrieve his axes from his missed dual-throw, Cockrell is all smiles — there’s no anger to be seen on his face.

“This is what it’s all about man,” he laughs. “We just play around and have fun. You can’t take it too seriously. Whether you’re throwing axes, juggling chainsaws or running with scissors — what else is better?”