The Best Things to Do in St. Louis This Week, February 1 to 7 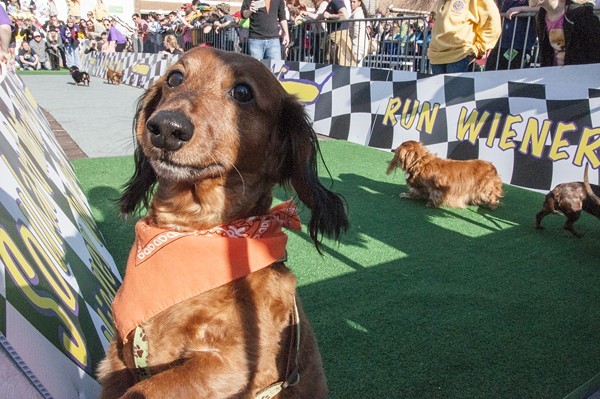 Things are heating up now. Mardi Gras' warm-up activities hit Soulard this weekend, Valentine's Day is close (order those bouquets now or pay the price) and St. Louis' galleries and museums are preparing for another round of shows. There's also the little matter of Wizard World St. Louis, which brings out the pop-culture fanatics for three days of fun and games.

Here are our picks for the best things to do.

1. Catch that bus
There is something deceptively simple at work in William Inge's play Bus Stop. There's little-to-no action in this slice-of-life drama, which captures one night in a small Midwestern diner where a busload of passengers are marooned during a snowstorm. Instead, Inge crafts miniature portraits of people who don't often appear in modern drama: a pair of lonely cowboys, a hillbilly girl escaping her old life in hope of a singing career, a young waitress who dreams of romance and literature but finds a lecherous older man who's only interested in one thing (and it's not her mind). These people are everyday folks, but in this small diner they encounter unwanted attention, a moment's hope, a temporary end to loneliness and the realization that love can be an unlooked-for aggravation as well as a force that brings people together — sometimes only for a short time. Clayton Community Theatre presents Bus Stop at 8 p.m. Thursday through Saturday and at 2 p.m. Sunday (February 1 to 11) at the Washington University South Campus Theatre (6501 Clayton Road, Richmond Heights; www.placeseveryone.org). Tickets are $15 to $20.


2. See a treasure trove of the printmaker's art
Like many collecting institutions, the Mildred Lane Kemper Art Museum (1 Brookings Drive; www.kemperartmuseum.wustl.edu) houses more art than it can easily display. As part of its continuing mission to bring stored pieces out for the public to enjoy, the Kemper presents its new exhibition, Postwar Prints and Multiples: Investigating the Collection. The exhibit draws on the wealth of printed artwork by a range of artists who rose to prominence during the twentieth century from a host of artistic movements. Among the artists represented by key works are Ellsworth Kelly, Claes Oldenburg, Man Ray, Meret Oppenheim, Roy Lichtenstein and La Monte Young. Postwar Prints and Multiples opens with a free reception from 7 to 9 p.m. Friday, February 2, at the museum. The show remains on display through April 16, and admission is free.

3. Experience the animated world of female filmmakers
Mainstream animation has largely embraced computer-generated graphics as the means of production, but just because it's the new method doesn't mean it's the only method. Artist Sarah Paulsen and Pulitzer Arts Foundation assistant curator Stephanie Weissberg together host Cut-Outs and Stop Motion, a screening of animated short films created by women. The nine films feature traditional methods such as cut-outs, stop-motion animation and the classic hand-drawn technique that once dominated the field. Films from ShiShi Yamazaki, Martha Colburn and Faith Hubley (mother of Yo La Tengo drummer Georgia Hubley) are scheduled to be shown during the program, which starts at 7 p.m. Friday, February 2, at the Pulitzer (3716 Washington Boulevard; www.pulitzerarts.org). A discussion of the techniques used and the evolution of the art form will follow the screening. Admission is free. 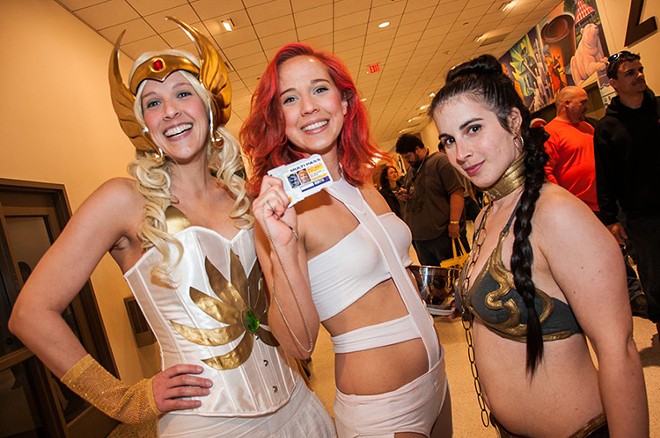 4. Pop goes the culture
Wizard World St. Louis returns for another weekend celebration of comic books, pop culture, genre film and cosplay. This year's celebrity guests include Marvel's legendary writer, editor, publisher and movie star Stan Lee (he's the godfather of Irving Forbush!), Star Trek's Nichelle Nichols, Lucy Davis (star of the original The Office and Etta Candy in the Wonder Woman film), the professionally handsome John Barrowman, valiant Sean Bean and the Lord of the Rings' hobbit heroes Billy Boyd (Pippin) and Sean Astin (Samwise Gamgee). There will be seminars for fans of everything: the films of Hayao Miyazaki, the rise of black heroes in pop culture and magical girl heroes. There's even a session on dealing with crowd-induced anxiety while cosplaying. Wizard World St. Louis 2018 takes place from 4 to 9 p.m. Friday, 10 a.m. to 7 p.m. Saturday and 10 a.m. to 4 p.m. Sunday (February 2 through 4) at America's Center (701 Convention Center Plaza; www.wizardworld.com). Single-day admission ranges from $39.95 to $44.95, and a three-day pass is $79.95 (each admission level includes free admission for two kids ages ten and younger).

5. Do these hills sound kind of musical to you?
Rodgers and Hammerstein's The Sound of Music has won over fickle audiences for more than 50 years, cementing its status as a classic with each new revival. But what's the secret of its success? Is it the actual music, which is recognized even by people who have never seen the whole thing? Is it the winsome love story of a young nun educating children and winning over a staid military man that packs them in? Is it the memory of Julie Andrews spinning in that Alpine meadow as she sings the praises of love and music to a field of wild flowers that does it? As unlikely as it seems, the obvious answer is that all three reasons combine to create a show that satisfies audiences on multiple levels (and don't discount the whole "foiling and humiliating the Nazis" element; everyone loves when a Nazi is publicly shamed). The Sound of Music returns to dazzle again at 7:30 p.m. Friday, 2 and 7:30 p.m. Saturday and 1 and 6 p.m. Sunday (February 2 through 4) at the Fox Theatre (527 North Grand Boulevard; www.fabulousfox.com). Tickets are $25 to $125.

6. Sink your teeth in to Mardi Gras
Mardi Gras' culture of excess is not limited to alcohol. Fat Tuesday is the last stop before the restrictions of the Lenten season take effect, so people avail themselves of these final days to indulge their sweet tooth, meat tooth, Cajun tooth, etc. Taste of Soulard, which takes place from 11 a.m. to 5 p.m. Saturday and Sunday (February 3 and 4) throughout the Soulard neighborhood (Allen Avenue and Menard Street), allows revelers to sample Mardi Gras-inspired delights from local restaurants. Your $25 pass gets you one drink voucher and six food vouchers. You're free to use them in any combination you choose at participating businesses. The menu is already online (stlmardigras.org/events/taste-of-soulard), and it's broad and deep. Whether you go traditional (Duke's crawfish & shrimp gumbo) or favor a taste of fusion (“Alligator Rangoon” at Mollys), you won't leave the event hungry or thirsty.

7. Dog parade! Need we say more?
The costume traditions of Mardi Gras are not just for humans, and the Beggin' Pet Parade is the proof. Beloved dogs who are comfortable wearing clothes, costumes or exotic outfits gather with their people at South Twelfth Street and Allen Avenue (www.stlmardigras.org/events/beggin-pet-parade) for the 1 p.m. Sunday, February 4, parade of pooches. It's free to watch, and if you believe your dog has the charisma and "wow" factor to be named one of the best-dressed pets in the parade, it's only $10 to register a single canine; the judges will select the most gloriously attired canines for the Court of the Mystical Krewe of Barkus at the Coronation Pageant, where the King and Queen of Barkus will be anointed with their crowns. Registration fees help the Open Door Animal Sanctuary. Dogs helping dogs is the hope our nation needs now.

8. Experience the sport of Könige
Perhaps you've wisely chosen a dachshund as your companion, one who is as fast as greased lightning and thrives on competition. In this case, you should consider registering your dachsie in the Wiener Dog Derby. For a $10 fee, your dog can compete against five other dogs on the 30-foot-long track at Wiener Stadium in Soulard Market Park (South Eighth Street and Lafayette Avenue; www.stlmardigras.org/events/wiener-dog-derby) starting at 2 p.m. Sunday, February 4. The race uses the elimination format (winning dogs in each heat move on to the next round, while the also-rans are done for the day) and dogs are sorted into one of four classes based on age. The ultimate winner will be crowned champion, although all other competitors will be winners in their own right — no dog is ever a loser in anything, because dogs are awesome.

9. Relive the slow fall of punk rock's corrosive king and queen
The toxic and ultimately fatal relationship of Sex Pistols bassist Sid Vicious and his American girlfriend Nancy Spungen is the inspiration for Alex Cox's cinematic biography Sid and Nancy. Written by Cox and University City native Abbe Wool, the film stars Gary Oldman as the musically inept and heroin-addicted Sid, with Chloe Webb as Nancy. Pistols singer John Lydon hates the film for its romanticized final scene (he feels it glamorizes heroin), but then he doesn't like much of anything. Sid and Nancy mostly succeeds on the strength of Oldman's phenomenal performance and Webb's portrayal of Nancy's grating, drug-hungry personality, in addition to its pretty great soundtrack (courtesy of Joe Strummer, the Pogues and the film's version of the Sex Pistols performing the band's original music). Sid and Nancy is shown at 8 p.m. Wednesday, February 7, at the Schlafly Bottleworks (7260 Southwest Avenue, Maplewood; www.webster.edu/film-series) as part of the Strange Brew film series. Tickets are $5.