Mardi Gras 2018 in Soulard: A Complete Guide to the Fun

Mardi Gras is imminent, which means a large chunk of the metro area’s population is putting the finishing touches on their costumes and stockpiling beads. But there’s more to Mardi Gras in St. Louis than parade Saturday and the bacchanalia of drinking that surrounds it.

The Missouri Lottery 5K Run for Your Beads starts at 9 a.m. Saturday, February 3, at South Eighth Street and Lafayette Avenue (www.stlmardigras.org/events/5k-run-for-your-beads). Fun runners and serious athletes alike compete for not just the best time in the race but also the best costume, so dress appropriately. Most of the fun runners are less concerned about winning than the fun part: Pit stops along the course are stocked with beer and hurricanes for those who like to refuel with a higher-octane beverage than your standard sports drink. Registration is $30 and available until race day.

Mardi Gras’ culture of excess is not limited to alcohol. Fat Tuesday is the last stop before the restrictions of the Lenten season take effect, so people avail themselves of these final days to indulge their sweet tooth, meat tooth, Cajun tooth, etc. Taste of Soulard, which takes place from 11 a.m. to 5 p.m. Saturday and Sunday (February 3 and 4) throughout the Soulard neighborhood (Allen Avenue and Menard Street), allows revelers to sample Mardi Gras-inspired delights from local restaurants. Your $25 pass gets you one drink voucher and six food vouchers. You’re free to use them in any combination you choose at participating businesses. The menu is already online (www.stlmardigras.org/events/taste-of-soulard), and it’s broad and deep. Whether you go traditional (Duke’s crawfish-and-shrimp gumbo) or favor fusion (“Alligator Rangoons” at Mollys), you won’t leave the event hungry or thirsty.

The costume traditions of Mardi Gras are not just for humans, and the Beggin’ Pet Parade is the proof. Beloved dogs who are comfortable wearing clothes, costumes or exotic outfits gather with their people at South Twelfth Street and Allen Avenue (www.stlmardigras.org/events/beggin-pet-parade) for the 1 p.m. parade of pooches on Sunday, February 4. It’s free to watch, and if you believe your dog has the charisma and “wow” factor to be named one of the best-dressed pets on parade, it’s only $10 to register a single canine; the judges will select the most gloriously attired dogs for the Court of the Mystical Krewe of Barkus at the Coronation Pageant, where the King and Queen of Barkus will be anointed with their crowns. Registration fees help the Open Door Animal Sanctuary. Dogs helping dogs is the hope our nation needs now.

But perhaps you’ve wisely chosen a dachshund as your companion, one who is as fast as greased lightning and thrives on competition. In this case, you should consider registering your dachsie in the Wiener Dog Derby. For a $10 fee, your dog can compete against five other dogs on the 30-foot-long track at Wiener Stadium in Soulard Market Park (South Eighth Street and Lafayette Avenue; www.stlmardigras.org/events/wiener-dog-derby) starting at 2 p.m. Sunday, February 4. The race uses the elimination format (winning dogs in each heat move on to the next round, while the also-rans are done for the day) and dogs are sorted into one of four classes based on age. The ultimate winner will be crowned champion, although all other competitors will be winners in their own right — no dog is ever a loser in anything, because dogs are awesome.

St. Louis is a dress-down town, and there’s no shame in that. You try wearing a three-piece suit or, worse, pantyhose and pantsuit in July in this city and you’ll quickly embrace the shorts and sandals look sported by the well-hydrated St. Louisan. But at least one night each year, people take high fashion very seriously. The Mayor’s Mardi Gras Ball is your excuse to dress beautifully (black tie is the standard) and enjoy a glamorous party in the St. Louis City Hall Rotunda (1200 Market Street; www.stlmardigras.org/events/mayors-mardi-gras-ball). Doors open at 7 p.m. Friday, February 9, and tickets start at $150 per person and go as high as $3,250 for a table of ten on the second floor of City Hall. All price points come with valet parking and an open bar in addition to dinner, dessert and dancing. Music is provided by the Funky Butt Brass Band, Sean Canan’s Voodoo Players, DJ Mahf and some top-secret Muny performers. 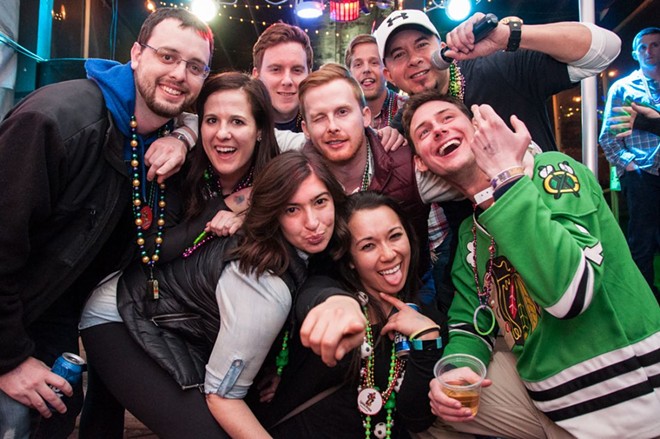 And then along comes Saturday, February 10, and the event that has all the revelers revved up: the Bud Light Grand Parade. At 11 a.m. at Busch Stadium (601 Clark Avenue), the parade starts its march toward Soulard and the Anheuser-Busch Brewery. The theme is “Celebrating #Muny100,” so expect the various krewes to show-biz it up in their best musical-theater flair. As always, watching the parade is free, and you just might catch something while you’re there: More than 10 million strands of beads will be flung from floats along the parade route. The party in Soulard will have already started by the time the parade steps off — it’s gonna get crowded and loud before it’s all over.

Naturally, if you would rather put some money down to guarantee a warm spot on the parade route, easy access to restroom and the majesty of a Cajun lunch buffet (courtesy of Joanie’s Pizzeria) and the all-important open bar (beer and cocktails), say hello to the Bud Light Party Tent, which is in fact two climate-controlled tents. For just $125 you get all this plus music from Rockstar DJs from 9 a.m to 6 p.m. Saturday, February 10. The Bud Light Party Tents are set up in Soulard Market Park, and you can buy your passes at www.stlmardigras.org/events/bud-light-party-tent.

But what if your ideal Mardi Gras includes hanging out with some of the most famous and personable St. Louis Blues players in team history? Oh, there’s a tent for that. The Blues Alumni Party Tent (South Seventh Street and Ann Avenue; www.stlmardigras.org/events/blues-alumni-experience) is open from 9 a.m. to 5 p.m. Saturday, February 10, and sports an open bar (beer and cocktails), a lunch buffet from Joanie’s To Go and even an air bubble hockey tournament. To sweeten the pot, a group of pre-selected St. Louis Blues legends will share stories from the good old days of the NHL, when the Norris Division was king and the Blackhawks were the whipping boys. When the parade wraps up, head outside of the climate-controlled tent for more fun and games (and beverages). Tickets for the Blues Alumni Party Tent are $110 (the Blues point total at the end of this season? May-beeee).