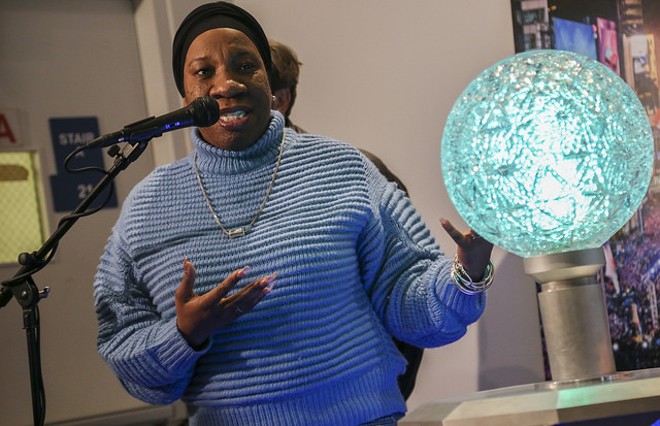 Webster University is celebrating Black History Month 2018 with a number of events — including a lecture by Tarana Burke, the woman who first introduced the #MeToo movement hashtag years ago.

Burke will speak on the main stage at Webster's Loretto-Hilton Center on February 19 at 6:30 p.m., with doors opening at 6 p.m. As if that weren't cool enough, the lecture is free and open to the public.

Burke, who was recently featured on the cover of Time, is widely credited as the founder of the movement that has women across the globe sharing their experiences of sexual harassment and assault.

According to the #MeToo movement website, Burke originally founded the movement in 2006, with a particular emphasis on helping young women of color from low-income areas who have been victims of sexual violence find healing. She is also the founder and director of Just Be Inc. and senior director of Girls for Gender Equality.
And unless you've been living under a rock, you probably became familiar with the movement Burke began in recent months. After being used by actress Alyssa Milano, Burke's hashtag (and idea behind it) went viral toward the end of 2017, giving empowerment and a voice to women who have been victims of sexual violence. Since then, countless survivors have come forward, and many perpetrators have been exposed — and toppled from positions of power.
In addition to Burke's appearance, Webster has a number of other events on its schedule for Black History Month, including a lecture and film showing courtesy of Damon Davis, the creator of the Ferguson documentary "Whose Streets?" Music, dance, an art exhibit and more are also on the agenda throughout the month. You can see Webster's full schedule for Black History Month here.

Editor's Note: This post was edited after publication to correct an error in Damon Davis' last name.