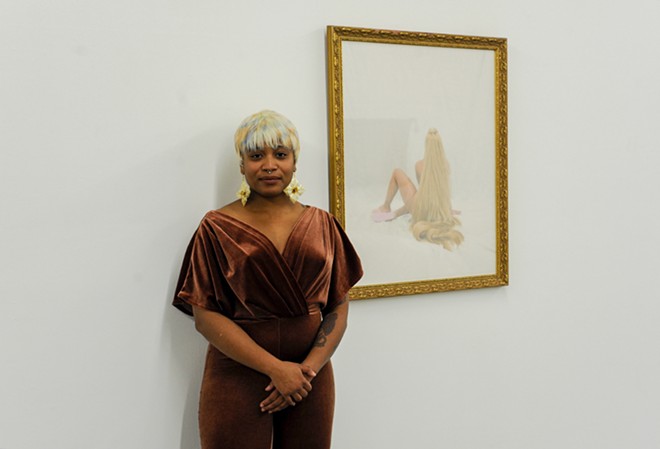 Modern black hair care has roots in St. Louis. Sarah Breedlove Walker, better known as Madam C. Walker, was the first woman in the U.S. to become a self-made millionaire. More than 100 years after her heyday, she's still regarded as one of the most successful black business owners in history. Her claim to fame? A series of beauty supply and hair products specifically created and manufactured for for black women.

Women at the time were burning their scalps and losing their hair trying to treat it. Walker’s product was created to help women combat many of the issues she saw in her brother’s barber shop here in St. Louis.

Walker's efforts were just the beginning. Black women have been finding products and swapping new techniques at beauty supply stores and salons since Walker’s time in the early 1900s. With Mane ’N Tail, the new show that opened at the Luminary (2701 Cherokee Street) last weekend, artist and curator Kat Simone Reynolds is exploring the culture surrounding those places.

Reynolds says she’s been thinking about the concept of beauty, and becoming beautiful, for some time. Reynolds' photography in the show focuses on the relationship between roots and authenticity. “I’m really interested in exploring the products, as well as the ritual of beauty for black women," she says.

Reynolds said that the show’s theme came together when she saw the work of Caribbean textile interdisciplinary artist SHENEQUA. SHENEQUA’s piece is an intricate wall-hanging made of synthetic hair, black cotton and foam rollers. SHENEQUA says the piece brings her back to when her sister would do her hair — it’s really the only time they got along during that period of their lives. “It was a kind of therapeutic, in a way," she explains. "To me it was about more than hair — though I wouldn’t trust just anyone with my hair. It was about the process, sisterhood, black hair culture and womanhood.”

The mixed media show, which runs until March 8, features ten established and up-and-coming female artists from around the country. Throughout the duration of the exhibit are three events calling for discussion about black beauty.

Reynolds doesn't claim to be a pioneer, but says she hasn’t seen a lot of similar programming in art shows around St. Louis. “I thought that there should be some type of space that was showcasing black beauty, but not just the surface of black beauty," she says. "It’s more about every woman and feeling confident in your beauty."

Noting that she's been working her way through the 2017 book of essays by performer Juliana Huxtable, Mucus in My Pineal Gland, she says, "It’s really something I think people will benefit from talking about in this type of setting.” Reynolds discovered the book through the Citizen Jane book series, a book club that meets locally. Now the club will be hosting a discussion tied to the show. 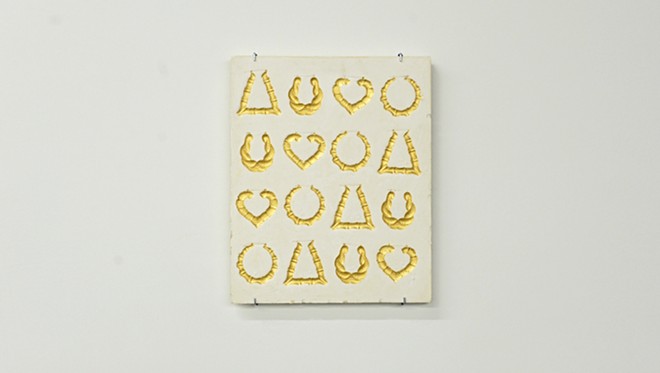 Detroit artist LaKela Brown makes sunken reliefs of the faux-gold bamboo earrings often found in beauty supply shops. Her work is inspired by creations of the Romans and Egyptians, with a little help from LL Cool J’s song “Around the Way Girl.” Brown says she’s happy to be a part of this show.

"It’s bringing together different angles of similar ideas. I hope my piece can bring some dimensionality to the show with my work. I’m happy to have my work alongside the beautiful work of these other great artists."

Mane 'N Tail is showing at the Luminary through March 8. There will be a free film screening of A Good Day to Be Black and Sexy organized in conjunction with Mane 'N Tail Friday, February 9, from 7 to 9:30 p.m. and a Citizen Book Club #4: discussing Juliana Huxtable’s Mucus in My Pineal Gland on Tuesday, February 13 from 6:05 to 9:05 p.m.