Google Arts App Matches St. Louis Woman With Portrait of Her Own Grandmother 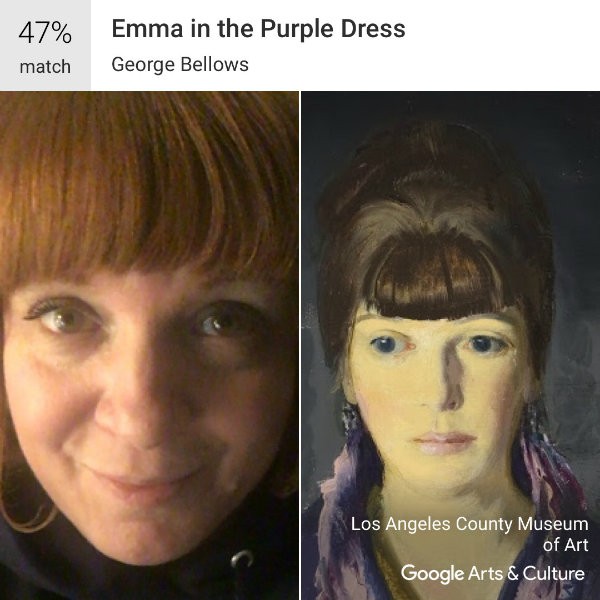 Anyone with a smartphone knows the Internet's latest obsession is the Google Arts & Culture app, which matches your selfie to a painting in museum collections that you (supposedly) look like. It's been easy to laugh at some of the resemblances — but we stopped laughing after one St. Louis woman was matched with a painting of (wait for it) her own great-grandmother.

Kate Stewart was having fun with her six-year-old daughter last weekend when they decided to try the app while making silly faces. Oddly enough, it was then that a painting of Stewart's own great-grandmother, Emma in the Purple Dress, popped up as a match.

Stewart tells us that her great-grandfather on her mother's side was noted painter George Bellows, a realist known for his depictions of New York City in the early 20th century. Featured in museums across the country, he's particularly known for his boxing paintings — though he has some pop culture placements, too. "His paintings pop up a lot in movies," Stewart says, mentioning Bye Bye Birdie among others.

She also says Bellows was a "devout family man" and loved painting portraits of his family, including his wife, Emma, who later proved to be Stewart's match. The couple had a brownstone in New York as well as a country home near Woodstock, where Bellows was part of the artist community.

Bellows died young in 1925 from appendicitis, but his wife was a fierce protector of his legacy.

"She was a ballsy, awesome, strong-willed person," Stewart says. She wasn't into formality, either: Stewart says when Emma died, her ashes were sprinkled in peony bushes in New York.

Despite the Bellows legacy in her family, Stewart says she looks more like her dad and didn't think about possibly matching an image by her great-grandfather. But apparently a change in lighting helped the family painting pop up — and then gave Stewart the chance to try it again with a not-so-goofy photo of herself, as pictured above.

Want to try the Google Arts & Culture app for yourself? You can find it on Google Play and in the Apple Store. A match with a painting of your relative not guaranteed.