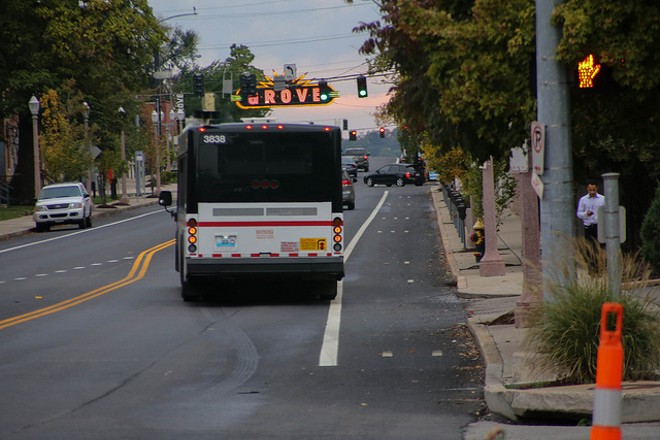 Twice a day, five days a week, I ride the mighty 97 bus from county to city and back again. I walk a brisk mile to avoid a transfer and the occasional delay, but walking's good for you; besides, I have seat waiting, hopefully with a view. I pay $80 a month for my ride and I'm all right with that; if I couldn't afford it there are several reduced-rates for those who need them.

I don't wear headphones while on the bus — I like to look out the window and watch as the neighborhoods slide by. Some have seen better days, but others are doing better. The terrain changes with the time of day and the amount of daylight. People are quiet in the morning, thumbing through screens on their phones or scanning the sports page to get the lowdown. The real show happens at the back, in what I consider the lounge.

That's where the conversation takes place. Some days you get a philosopher loudly telling his neighbor, "If you Google 'who wrote the Bible,' the very first answer is 'Shakespeare.' That's John Shakespeare — you know the Rastafarians? That's why the say 'jah' all the time, they're saying 'Jesus.'"

"Mister, I put my faith in Jesus," his neighbor answers.

"His greatest character," comes the response.

It's not all fun and games on the 97. One grey morning traffic is snarled by a collision at Kingshighway. Emergency workers have closed a lane and it's playing havoc with the schedule. A somber woman in the back sees the time roll on in the bus' interior display. She wails softly as she misses her transfer. "That's my bus!" she sobs.

Moments later she apologizes. This is the third of four funerals she's heading to this week. Grief has stretched her to the brink.

Every once in a while there's a personal problem. A woman and young man go at it too loudly, and our driver keeps an watchful eye on them in his rear-view mirror. He's sharp on the job, but he's responsible for our safety and he doesn't take that duty lightly.

She disembarks through the back door with another man, but she's still reading her opponent the riot act. Just before the doors shut she heaves her drink at her foe, but her companion deftly steps in front of her, blocking her throwing arm.

There are conversations, too. A man in his 30s is showing a couple of would-be bad boys the scars from a serious surgery where the shotgun pellets perforated his artery. "You gotta get clean and get a job; don't make the mistakes I done. I moved across the city and I'm doing all right. I got mine."

There are moments of unexpected beauty, too. A young couple hold hands and stare into each other's eyes the whole way, talking quietly. As Ike and Tina sang, he loves her like the flowers need the spring. They're so locked on each other that he leaves his something on the seat as they walk off into the morning. The driver locks the bus and steps half-way out the door to shout after him to come get his phone. An older gent tells a neighbor he hasn't seen in a while, "He put it on me, and I'm going to carry it down the road a while." A young father and two kids are heading to day care, and he's harried by multiple bags. He leave quickly with the pumpkin seat in hand, but he's left the diaper bag behind. A helpful fellow gathers it up and runs after them down Union — our chipper driver Keith telling him, "I'll wait for ya."

This morning our driver isn't blessed with great height, but she handles the bus with rare grace. We turn from Barack Obama onto Compton with geometrical precision, Compton's rounded curb a ghostly fulcrum that doesn't even get to kiss the back wheels. Out the back doors I can see it hang still for an instant and then it's gone. If she drives the bus long enough, she can progress up the system to a MetroLink train, but the city would be poorer for want of her arcs.

And on we roll, beating the running edge of a thunderstorm in the morning and pursuing the setting sun in the evening, to home, or school, or third shift.