The Best Things to Do This Weekend, December 28 to January 3

Well, that escalated quickly. Winter has officially made its presence felt, proving that sometimes Yuletide wishes do come true. It's gonna be a frosty New Year's Eve in St. Louis, but fortunately most of the parties are indoors. And speaking of New Year's Eve, you can find the full list of parties here.

Here are the rest of this holiday weekend's highlights.

1. Enjoy a modern version of a classic fairy tale
The 2013 Broadway reimagining of Rodgers and Hammerstein's Cinderella features an updated book by Douglas Carter Beane. Young Ella is still mistreated by her stepmother and two stepsisters, but now she dreams of a kinder, friendlier kingdom, not just going to the ball. Her stepsisters are similarly fleshed out, with one imperious and the other timid. The Prince, uncertain about what kind of ruler he will make, is now looking for guidance. Still, the basics that make this story a classic for the ages remain, with a Fairy Godmother appearing to help Ella achieve her dream of attending a royal ball, a series of remarkable on-stage transformations and those lovely Rodgers and Hammerstein songs. Cinderella plays the Fox Theatre (527 North Grand Boulevard; www.fabulousfox.com) for a brief run. Performances are at 1 and 7:30 p.m. Wednesday and Friday, 7:30 p.m. Thursday, 2 and 7:30 p.m. Saturday and 2 p.m. Sunday (December 27 to 31). Tickets are $35 to $125.

2. Ring in the New Year with some glitz
Lola van Ella and her burlesque friends celebrate New Year's Eve with some Old Hollywood glamour at the Silver Screen Spectaculaire. Inspired by the golden age of film and MGM musicals, van Ella, Bazuka Joe, Midnite Martini and Ray Gunn take the stage to a grand film score performed live by the Spectaculaire Orchestra. Expect thrills and chills, along with some bawdy humor that would never be allowed under the Hays Code. The Silver Screen Spectaculaire takes place from 9 p.m. to 1:30 a.m. Sunday, December 31, at Casa Loma Ballroom (3354 Iowa Avenue; www.vanellaproductions.com). Tickets are $55 to $350.

3. Welcome 2018 a little early and beat the rush
As you age, celebrating New Year's Eve begins to feel like more of a hassle than it's worth. It starts late, you have to eat a heap of food to prepare your alcohol reception base, everybody's shouting, etcetera. Nothing but headache. For the urbane celebrant, the Pat Connolly Tavern (6400 Oakland Avenue; www.patconnollytavern.com) offers an Irish New Year's Toast. The hook is that, rather than celebrating at midnight CST, the tavern centers its festivities around midnight in Ireland, which is 6 p.m. our time. Free Guinness stout samples are available for the traditional "midnight" toast, and there will be live music all night. The Irish New Year's Toast takes place from 4 to 8 p.m. Sunday, December 31, and there's no cover. You may notice that the time would also work for the young person who believes in pre-gaming before the big event — no judgments. 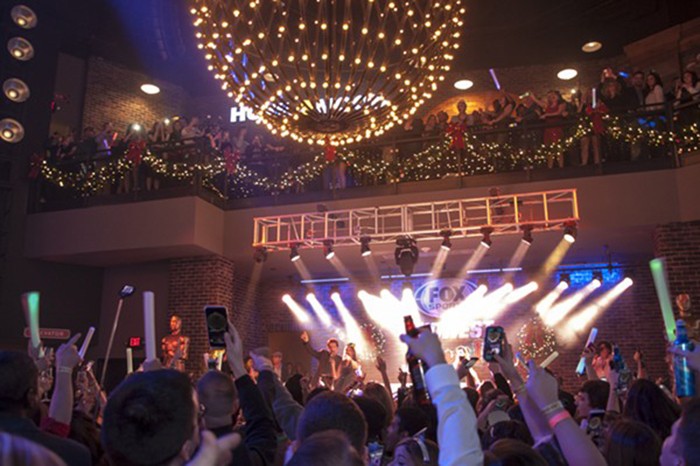 4. Party hearty — and maybe win a little cash
Ballpark Village always goes large for New Year's Eve, and this year is no exception. NYE Live! sprawls across five venues inside Ballpark Village (601 Clark Avenue; www.stlballparkvillage.com), with party favors, a midnight toast and a live performance by DJ Dynamix. The party also has the ubiquitous in-house ball drop at midnight, but this one has a twist; thousands of dollars will be mixed in with the confetti this year, yours for the grabbing. NYE Live! takes place from 7 p.m. to 3 a.m. Sunday, December 31, at Ballpark Village (601 Clark Avenue; www.stlballparkvillage.com). Tickets are $75 to $110, with VIP-option buffets available at Budweiser Brew House and Cardinals Nation.

5. Skate out the poisons of last night
St. Louis echoes with the promises of freshly-sworn New Year's resolutions, but following through on these solemn oaths is tough to do. The days are short and dark, it's cold and your TV is sitting right there. You don't have to go out and beat the world on the first day of your new life, though. You could simply get in a little bit of exercise and then reward yourself immediately with a hot cocoa. Steinberg Ice Skating Rink (400 Jefferson Drive in Forest Park; www.steinbergskatingrink.com) is open every day during the winter, with extended hours for the holiday season (open 10 a.m. to midnight December 22 to January 7). In these first days of a brand new year you could skate for 20 minutes — just enough to get your heart rate up — and then return home cozy and warm. Admission is $7 and good for the whole day, so you could go longer if you wished. Better to start your journey to a healthier you with baby steps then run two miles and call it a year.

6. Enjoy St. Louis' close-up
John Carpenter's 1981 sci-fi thriller Escape from New York is rumored to be in the early stages of a Hollywood reboot/prequel, but you have to wonder why. The original is so entertaining and tautly paced that it's going to be tough to best, let alone equal. In Carpenter's grim vision of the future, the president is shot down over New York, which is a city-sized prison. The government sends in the criminal Snake Plissken to track him down and bring him back alive. The film famously stars St. Louis as Manhattan's stunt double, with a pre-renovation Union Station and the Chain of Rocks Bridge getting enough screen time to deserve a credit on the film poster. The Webster Film Series presents Escape from New York at 8 p.m. Wednesday, January 3, at Schlafly Bottleworks (7260 Southwest Avenue, Maplewood; www.webster.edu/film-series). Admission is $5.