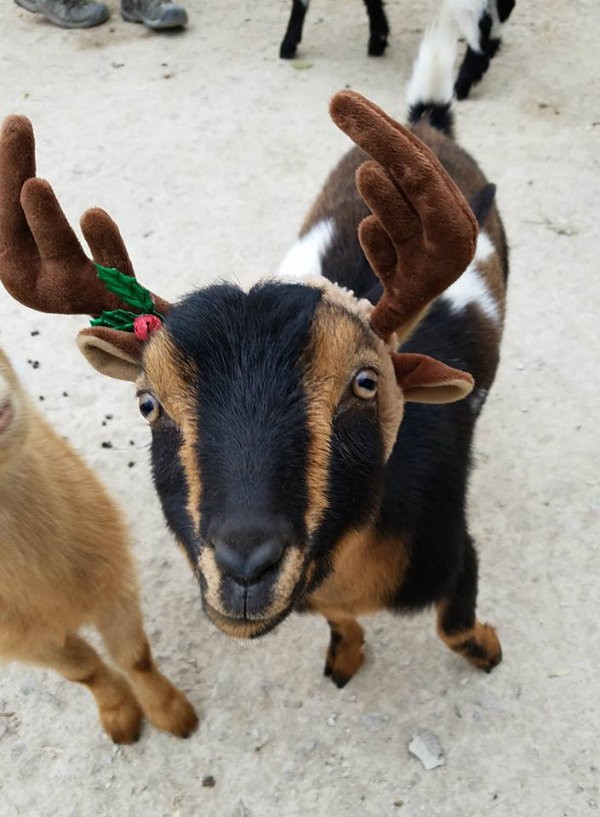 If your holiday frame of mind aligns more with Scrooge than Santa, prepare yourself for an overdose of adorableness that may merry up your mood.

Earlier today, the Saint Louis Zoo posted a few photos on Facebook of its Nigerian dwarf goats as part of a Facebook takeover by the Children's Zoo zookeeper.

The goats are already dapper, with names including Henry Hudson, Lewis and Ferdinand, but the zoo decided to kick their cuteness factor up another notch with reindeer antlers today. And the internet, no surprise, is loving it — to the tune of more than 2,900 reactions, 401 shares and 272 comments as of press time.

And how could it not? Just look at these faces.

Seriously, where were they with their superior modeling skills when you were trying to get a Christmas card picture?


OK it's official. All we want for Christmas is a Nigerian dwarf goat.


The zoo says in the post that the goats were in the holiday spirit this week and auditioned for a reindeer team led by "Santa Paws," aka this adorable pup named Hannah.


"Unfortunately, they didn’t make the cut. Though these goat kids are great climbers, they weren’t able to fly like Santa’s reindeer," the Facebook post reads. "The goat kids are just a little too rambunctious and not quite strong enough to pull the sleigh! #keepertakeover #childrenszoo #santapaws"

Apparently Patches, a dwarf burro at the zoo, also decided to audition, but ran into issues when her ears blocked the reindeer antlers. Bubbles, a dwarf zebu, was the one featured animal to make the cut.

To the animals who didn't make it, we say, don't worry about it. We'll take you guys at the Saint Louis Zoo over Santa's boring old reindeer any day!