Circus Flora to Get New, Permanent Home in Grand Center 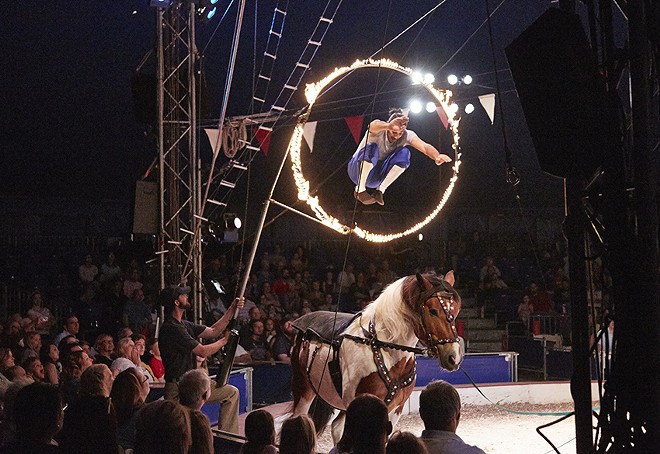 For sixteen years, Circus Flora has set up its big tent every summer in the parking lot of Powell Hall. Once the Saint Louis Symphony finishes its season, the one-ring theatrical circus begins its 3.5-week run.

But big changes are coming for the homegrown circus in 2018. Circus Flora is finally getting a home of its own — a vacant lot one just a block to the southwest of Powell Hall in Grand Center. And that more permanent solution means the circus no longer has to avoid the symphony's spring shows; it now plans to kick off its season in April.

That, of course, should mean much nicer (read: cooler) weather than the usual run in June.

"It's going to be a more hospitable time of year," says executive director Larry Mabrey. "The environment in the tent should be a lot more comfortable."

Seismic though that shift may be, it's not the only thing in flux for Circus Flora. The circus' new home for performances at 3401 Washington Boulevard will also become the home of its administrative offices. Mabrey says the executive team is working with the Kranzberg Arts Foundation, which owns the site, to construct a facility from shipping containers.

The building that results, he says, will become an on-site center for the circus, serving as everything from the box office to storage to a home for its three full-time employees. For the last decade, those functions have been performed from a suite a few blocks south at Centene Center.

Mabrey says he likes the flexibility the container-style construction will give the organization. "As we grow — because we have great plans for that — it will be possible to add more containers, to put one on top," he says. "We're hoping we'll get to the point where we outgrow what we have. That would be fantastic." Being on the same site as the big top should also save significant amounts of time and money, he says.

The circus' plans have been in the works for awhile, and Mabrey says it's exciting to finally be able to discuss them — and to see the new site begin construction. He says he's grateful for the Kranzberg Arts Foundation's support — and positively floored by how fast they're able to move.

"When it was time to start happening, we turned around and they were digging in the streets!" he says.