Maybe Don't Buy Your Gun-Concealing Furniture from This Missouri Business 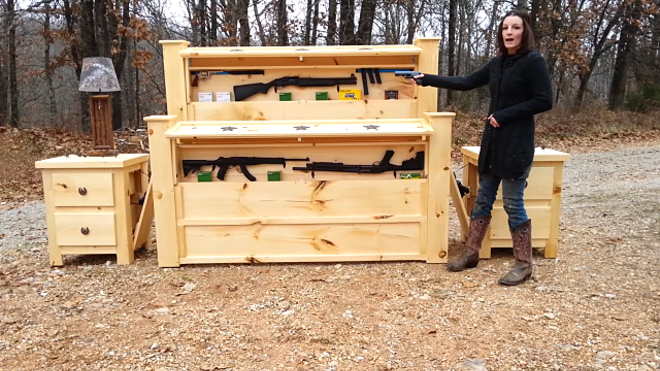 Let's face it: You have a lot of guns, and you need somewhere to put them, preferably without anyone else having any knowledge of their whereabouts. "I should get some specially-made furniture and wall art in which to shove my multitude of firearms," you inevitably end up thinking. Hey, we've all been there.

But before you hand your hard-earned cash over to Rough Country Rustic Furniture, Missouri's premier manufacturer of American flags and crosses that also conceal deadly weapons, be advised: The Better Business Bureau has just released a consumer warning alleging that the Mountain Grove, Missouri-based manufacturer "fails to deliver goods in a timely fashion and is lax in issuing refunds."

The company's website has everything from lamps to coat racks to entire bedroom sets available for purchase, each capable of holding a veritable armory completely out of sight. The "Deluxe High Capacity Coffee Table," for example, can conceal as many as fourteen different firearms, just in case you and thirteen of your friends are sitting around your living room, minding your own business, when a marauding band of intruders or grizzly bears or whatever bursts in and tries to start trouble.

Likewise, this handy bedroom set, shown below, allows you and whichever two people you share a bed with to each suddenly and badassedly dual-wield firearms in the case of an intruder — with one whole gun left over.


Unfortunately, the company, which has more than 2 million followers on its Facebook page, can't seem to keep its word in regards to shipping times, according to the Better Business Bureau, with some customers waiting as long as a full year for their orders to ship before finally canceling.

"This business isn’t keeping up with its orders," says Michelle Corey, president and CEO of Better Business Bureau St. Louis. “It needs to be proactive in letting customers know when orders take longer than expected and follow through on refunds or take measures to ensure that delivery deadlines are met."

In a letter to the BBB sent in October, company owner Joseph Ross explained that the delays were based on a series of problems with contractors and some employees. “We are doing everything we can to make this right,” Ross claimed, adding that the company serves “20,000 – 30,000 customers per year,” and has “thousands of satisfied customers.”

From the period of October to today, however, the BBB has received more than 70 unaddressed complaints against the company, it says. Rough Country currently is scored by the BBB with 1.67 out of five stars, resulting in an F rating. The site is filled with comments from dissatisfied customers, many written in the last two weeks.

"DON'T ORDER FROM THESE CROOKS," Claire K. writes in December. "Ordered $1600 worth of furniture in May, got all sorts of excuses as to why it hasn't been delivered, now they are not responding to emails at all and I am having to use my credit card company to try and get my money back. Looks like others have said the same thing."

In November, Faith O. similarly writes: "Horrible!!! Had to go through our credit card company to issue a refund because this company wouldn't respond to e-mails after our order was later than quoted. NEVER do business with this company!!"

Robert B.'s November review is to the point: "rough country furniture took 1035.00 from me 32 weeks ago no order or refund yet insane bunch of crooks don't respond to my emails either"

And so it stands: Hiding your massive arsenal of guns in secret compartments all over the furniture and wall decorations in your home is obviously a really, really good idea.

But ordering that gun-concealing gear from Rough Country Rustic Furniture? Maybe not so much.