The Best Things to Do This Weekend, December 1-3

Is there a word for the strange way time passes the week after Thanksgiving? The workday seems to crawl through the morning, then just as noon strikes its 4 p.m. — what do we call that strange time dilation? Vacationgover? Turkey Flashback? Gravy Withdrawal? Somebody send a tweet if they know.

It's nigh December and now everything starts to happen at once, with final shows of the season, holiday-themed tours and even — unexpectedly — the opening of a new art gallery.

1. Catch a play about red scares
It's a big day for Bernie Lutz, one half of the comedy writing team Lutz and Frumsky. He and Morris Frumsky have a new film about to premiere, but that's suddenly no certain thing. Bernie learns that he's been named in the press as a possible communist, and that means Joe McCarthy is sure to come calling. In a panic, Bernie tries to convince the press that he's an apolitical man who only cares about comedy, but as one-time employers and allies abandon him it becomes clear that being funny might not be enough to save himself. Still, he might be able to save himself if he rats out others as communists — whether they actually are or not. Phil Johnson and Marni Freedman's one-man show A Jewish Joke follows Bernie for one interminable afternoon as he questions everything he knows about himself and considers ruining friends' lives to save his own. The New Jewish Theatre presents A Jewish Joke with Johnson in the sole role. Performances are at 7:30 p.m. Wednesday and Thursday, 8 p.m. Saturday and 2 and 7:30 p.m. Sunday (November 29 to December 10) in the Wool Studio Theatre at the Jewish Community Center (2 Millstone Campus Drive; www.newjewishtheatre.org). Tickets are $41 to $44.

2. Check out a brand-new art gallery
The St. Louis community of art galleries has its times of stability followed by periods of flux, the same as every creative scene. These recent years have seen more upheaval than might be healthy — but in the wake of change comes something new. Monaco, an artist-owned gallery attached to the space that houses the Luminary, is hopefully the first such new growth. The cooperative Monaco has twelve founding members, among them Amanda Bowles, José Garza, Allison Lacher and LAB:D (Lindon Barrois Jr. + Addoley Dzegede). Monaco opens with the group exhibition Grand Prix, which features work in all media from the founding collective. The inaugural show opens with a free reception from 7 to 10 p.m. Friday, December 1, at Monaco (2701 Cherokee Street; www.monacomonaco.us). Grand Prix remains on display through December 30.

3. See a black comedy on stage
Carmichael is approaching the closure he's been pursuing for the past 27 years. He's in a cruddy hotel room, waiting for his meeting with Toby and Marilyn, who say they can help him. All Carmichael needs is a hand out — specifically his left hand, which was severed from his arm more than a quarter-century ago. He's been pursuing his wayward appendage all the while, and now he's close: Toby and Marilyn claim to have Carmichael's hand, and they'll sell it back to him for the right price. But can a man fixated on what he doesn't have and two people who've sunk so low they're selling necrotic body parts in dumpy hotels successfully close any deal? Martin McDonagh's black comedy A Behanding in Spokane puts you in the room for the dead-end deal of the century. St. Louis Actors' Studio continues its season with A Behanding in Spokane. Performances take place at 8 p.m. Thursday through Saturday and at 3 p.m. Sunday (December 1 to 17) at the Gaslight Theater (358 North Boyle Avenue; www.stlas.org). Tickets are $30 to $35. 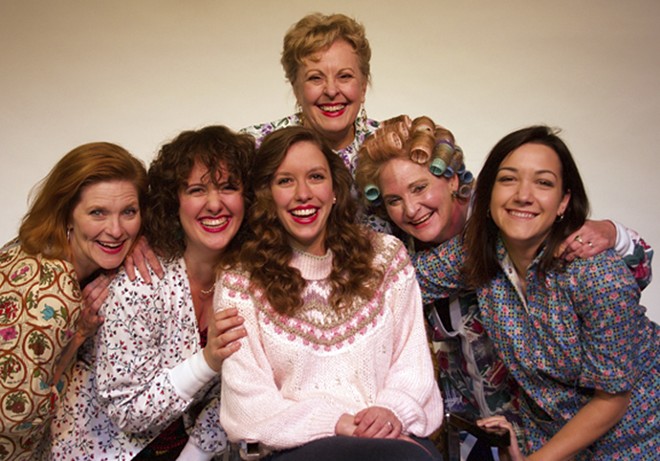 4. Laugh (and cry) with a play about Southern ladies
Robert Harling's slice-of-Southern-life play Steel Magnolias inspired a hit film that continues to be a favorite of women everywhere. The faithful are familiar with the plot, but for those that haven't seen it, here goes: Shelby Eatenton and her mother M'Lynn live in a small Louisiana town, the center of which is Truvy's in-home beauty parlor. Truvy's regulars — the Eatenton women; Clairee, the widow of the former mayor; and Ouiser, a wealthy curmudgeon — are joined by Annelle, Truvy's new apprentice from out of town. Over the next three years the ladies grow closer as Shelby gets married, risks her life to have a baby and then falls seriously ill. Life changes in big ways for some of them and in small ways for others, but throughout they only grow closer. Stray Dog Theatre presents Steel Magnolias at 8 p.m. Thursday through Saturday (November 30 to December 16) at the Tower Grove Abbey (2336 Tennessee Avenue; www.straydogtheatre.org). Tickets are $25 to $30.

5. Marvel at a fall dance showcase
If you've spent any time waiting in a public space, you're no doubt aware of everybody's digital addiction. In movie theaters, waiting rooms, lobbies and queues we bow silently to our phones, connected to the world but untethered from each other. It's a weird way to go through life, particularly during this season of togetherness. The Washington University Dance Theatre fights back with its fall showcase, Here.Now.Together. Artistic director David Marchant and guest choreographers have crafted a show that celebrates the completely analog human body in movement and communication with other human beings. Here.Now.Together. is performed at 8 p.m. Friday and Saturday and 2 p.m. Sunday (December 1 to 3) at Washington University's Edison Theatre (6445 Forsyth Boulevard; edison.wustl.edu). Tickets are $10 to $20. Leave your phone at home.

6. Brush up your Austen with a sequel story
Middle children have long read Jane Austen's Pride and Prejudice and thought, "Yeah, great, Elizabeth Bennet got everything she wanted and more; what happened to that voracious reader Mary Bennet?" Playwrights Lauren Gunderson and Margot Melcon have at last provided an answer with their Austen-inspired comedy, Miss Bennet: Christmas at Pemberly. Mary Bennet has always been unfavorably compared to her two older and two younger sisters, but now she strikes out on her own. When the holidays provide her an unexpected romance, Mary for the first time is allowed to shine. Can she stop reading long enough to seal the deal? The Repertory Theatre St. Louis has the answer. Miss Bennet is performed Tuesday through Sunday (November 29 to December 24) at the Loretto-Hilton Center (130 Edgar Road; www.repstl.org). Tickets are $18.50 to $89.

7. Gape at the gorgeous homes of Soulard
There are now roughly two dozen TV shows about buying homes, rehabbing them and then decorating them (often with shiplap, whatever that is). It puts a lot of pressure on those of us who can't really get into decorating for the holidays, even if we sometimes long for boughs of holly. There's a way to scratch that particular itch with only a minimal effort — the Soulard Holiday Parlour Tour. Generous and house-proud residents of the historic neighborhood welcome the curious to take a guided tour of some of their finest front rooms from 10 a.m. to 4 p.m. Saturday and 10 a.m. to 3 p.m. Sunday (December 2 and 3). The tour starts at Gene Slay's Girls & Boys Club (2524 South Eleventh Street; www.soulard.org), where there will be a holiday bazaar, plus food and music. From there you'll board a heated shuttle bus that will take you and your guide to the participating homes, where you'll meet homeowners and learn about what it's like to restore a home without a camera crew filming everything. Tickets are $25 to $30.