That curly-haired kid on Stranger Things repped Missouri, and you didn't even notice.

It turns out that pint-sized demon fighter Dustin, played by Gaten Matarazzo, spent a big chunk of the second season of the addictive Netflix hit wearing a T-shirt that a Springfield orthodontist designed more than 30 years ago.

Dr. Wes Allai, who for some reason wasn't binge-watching the series, told KOLR 10 he created the shirts in 1982, shortly after he began practicing. The design shows tiny astronauts installing braces on a giant, floating set of teeth, hovering in front of a blue planet. The words "Brace Yourself for the Future!" deliver the punchline. 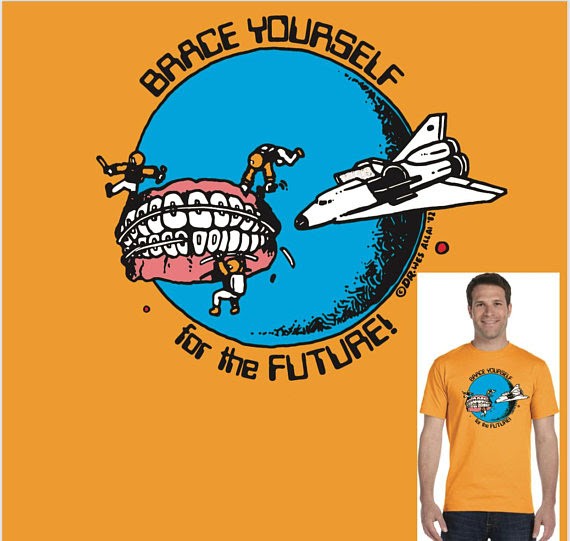 It's a solid orthodontist pun, which is sort of perfect for Dustin, a child of the 1980s with a genetic condition marked in part by baby teeth.

"I told you a million times, my teeth are coming in," a frustrated Dustin tells his junior high co-stars at one point. "It's called cleidocranial dysplasia."

The shirt gets a nice long cameo (albeit, one partially hidden under a sweatshirt) during a key sequence toward the end of the second season. Dustin pals around with one of the show's high school heartthrobs, pumping the older ladies' man for advice on love and hair. It's one of the sweeter story lines of the whole series, and he's wearing Allai's shirt through most of it.

The orthodontist says he has no idea how the shirt ended up on the show. He told KOLR he has handed them out to patients for years, but didn't realize they traveled much beyond southern Missouri.

And, yep, he's selling them. He's got an Etsy shop where they're going for $19.99, plus shipping. Brace yourself.