The Best Things to Do in St. Louis This Week, November 16-22 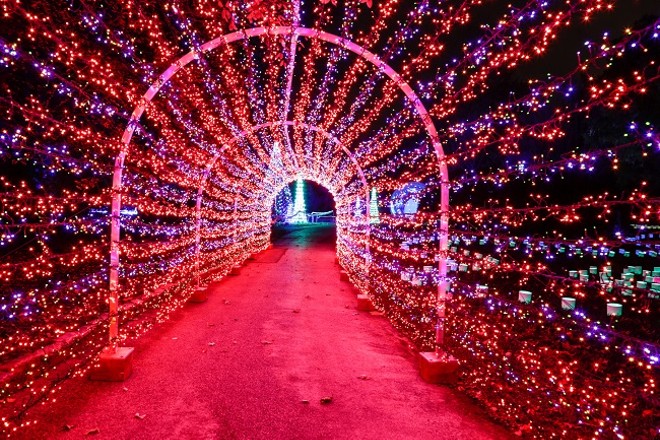 Can you feel that? This is the calm before the storm, friends. Enjoy the last of the quiet, autumnal days before the Christmas tsunami hits and washes us into next year. This last bit of quietude brings with it that ponderous, dreamlike quality, doesn't it? And in true dream-logic form, we have a celebrity Python in town and an extra-large cast of tattooed people.

1. See John Cleese and his masterpiece downtown
Monty Python and the Holy Grail remains an unassailable comedy classic. It doesn't matter if you're a high-brow medievalist who loves the film for the period-correct pronunciation of "knight" used throughout or simply a fan of moose-bite jokes; Holy Grail has something for everyone. In fact, the only thing it doesn't have is a live John Cleese that steps out of the film at the end and answers all your questions about sword-throwing watery tarts as forms of government and why the French think elderberries are insulting — until now. Following a showing of the film at 7:30 p.m. Thursday, November 16, at Peabody Opera House (1400 Market Street; www.peabodyoperahouse.com), John Cleese will take the stage to answer your questions. Please note that Mr. Cleese has requested "absurd and/or ridiculous questions only," so go nuts. Tickets are $55 to $250.

2. Catch some Indian dance right here in St. Louis
Dances of India marks its 40th anniversary this year, and of course the company will celebrate the occasion with a special performance. Devi of the Ashes — Cinderella in India retells the fairy tale with an Indian twist. There are two Cinderellas in this version: the Cinderella of the present, who suffers under the demanding watch of her stepmother and vain stepsisters, and a past-life Cinderella, who has been through this once before. Devi of the Ashes features several guest artists, including Bangalore's Sanjay Shantaram, Kiran Rajagopalan (a St. Louis dancer now based in New York) and French-Canadian dancer Patrick Suzeau. Performances take place at 7 p.m. Friday and Saturday (November 17 and 18) at the Skip Viragh Center (425 South Lindbergh Boulevard; www.dancesofindiastlouis.org). There is a children's performance at 3 p.m. Sunday, November 19, as well. Tickets are $15 to $20.

3. See a new show at the Saint Louis Art Museum
American artist Matt Saunders is interested in the way an image can be altered with the passage of time. He pursues that interest through photography and animation, with a particular emphasis on avoiding cameras. Instead he captures light that has passed through oil paintings on linen, or through printed-on plastic, to create the shadows of images; his photograms are almost dark reflections of the intervening material. Saunders has created all-new work for Currents 114: Matt Saunders, his new exhibition at the Saint Louis Art Museum in Forest Park (1 Fine Arts Drive; www.slam.org). Among these new works are large-scale copper-plate etchings and a video installation that plays across multiple screens in two galleries. The mutable images of Matt Saunders are on display Tuesday through Sunday (November 17 to February 4) in gallery 249 and 250. Admission is free.

4. Catch Big Muddy Dance: Novelties
Is it more difficult to write about dance than it is to dance about writing? Apparently not. Big Muddy Dance Company opens its seventh season with Novelties, a collection of dance pieces inspired by the written word. Gabrielle Lamb's The Hourglass Sanitarium is based on Polish-Jewish writer Bruno Schulz's novel Sanitarium under the Sign of the Hourglass, which is a strange, dreamlike reminiscence on the death the narrator's father; A Mariner, Katarzyna Skarpatowska's piece, is inspired by Awakenings, Oliver Sacks' nonfiction account of his attempts to "wake" people suffering from sleeping sickness. Big Muddy's artistic director, Brian Enos, offers a tribute to typography with Typo. Novelties is performed at 8 p.m. Saturday, November 18, at Washington University's Edison Theatre (6445 Forsyth Boulevard; www.bigmuddydanceco.org). Tickets are $35.

5. Get cold at Winterfest at the Arch
Last year's Winter Classic outdoor hockey game was a great success, from the weather to the outdoor civic skating rink to the final score (the St. Louis Blues beat the Chicago Blackhawks 4-1). Unfortunately the city doesn't get another outdoor game again this year, but the skating rink will return. Winterfest at the Arch opens the ice at 2 p.m. Saturday, November 18, at Kiener Plaza (500 Chestnut Street; www.archwinterfest.com). The opening coincides with the Ameren Festival of Lights, which features live entertainment, the lighting of the Salvation Army Tree of Lights and a fireworks finale. The rink's regular hours are 2 to 9 p.m. Thursday through Sunday through January 1, and admission is free if you have your own skates (must be approved at the gate). If you are skateless, you can rent a pair ($7 to $12 per hour).

7. See the Old School Tattoo Expo
More than 80 tattoo artists are heading to St. Louis this weekend. They're coming from both coasts and all points in between, bringing their skills, knowledge and experience to swap tips and show off their technique at three days of seminar and contests at this year's Old School Tattoo Expo. The November tradition is in its thirteenth year and shows no signs of slowing down. If you want to get tattooed, this is the place. If you just like admiring other people's ink, this is still the place. The 2017 Old School Tattoo Expo takes place from 2 to 10 p.m. Friday, noon to 10 p.m. Saturday and noon to 8 p.m. Sunday (November 17 to 19) at the Holiday Inn St. Louis Downtown (811 North Ninth Street; www.old-school.com). Admission is $20 per day or $50 for the whole weekend. There are tattoo contests all three days (it costs $5 to $10 per tattoo entered, depending on the contest), and winners get a plaque for both the owner of the tattoo and the artist.

8. Make a triumphant return to Garden Glow
Once Black Friday rolls around it's officially the holiday season, and the Missouri Botanical Garden (4344 Shaw Boulevard; www.mobot.org) is prepared. More than one million colored lights have been strung throughout the property in preparation for this year's Garden Glow, and now all that's needed is the crowds. This year's Garden Glow is open from from 5 to 10 p.m. daily from November 18 to January 1 (closed Christmas Eve and Christmas Day), and your tickets now include admission to the Gardenland Express Holiday Flower and Train Show. The last entry each day is at 9 p.m., because if you come any later you won't get to see it all (and you won't get s'mores, either). Tickets are $3 to $18, and it's wise to purchase them in advance — they go fast.


9. View Rudolph the Red-Nosed Reindeer at the Fox
The greatest debate of our time is not about politics, sports or even if a hot dog is a sandwich — it's which Christmas special is better, the Peanuts one or Rudolph the Red-Nosed Reindeer? In one hand, Linus van Pelt schools everyone on what the true meaning of Christmas is; in the other, Hermey the Elf uses dentistry for good. They both have their merits, but only one show is being presented live on-stage this week. Rudolph the Red-Nosed Reindeer the Musical brings the stop-motion classic to life, with Rudolph, Hermey, Yukon Cornelius and the ever-lovin' Bumble all learning that it's our differences that make us unique. Rudolph is performed at 7:30 p.m. Tuesday and 1 and 7:30 p.m. Wednesday (November 21 and 22) at the Fox Theatre (527 North Grand Boulevard; www.fabulousfox.com). Tickets are $23.50 to $68.50.

10. Cheer on the cops and firefighters at Guns 'N Hoses
For 31 years now, area police and firefighters have gathered on the eve of Thanksgiving to raise funds for the families of their fallen brothers and sisters. Guns 'N Hoses features police fighting firemen in three rounds of boxing and mixed martial arts, with the proceeds from ticket sales going to Backstoppers, the organization that helps the families of first responders killed in the line of duty. The bouts may be for charity, but both teams want to emerge victorious; none of these men and women will throw a fight. The 2017 edition of Guns 'N Hoses takes place at 6:30 p.m. Wednesday, November 22, at Scottrade Center (1401 Clark Avenue; www.scottradecenter.com). Tickets are $12 to $32.