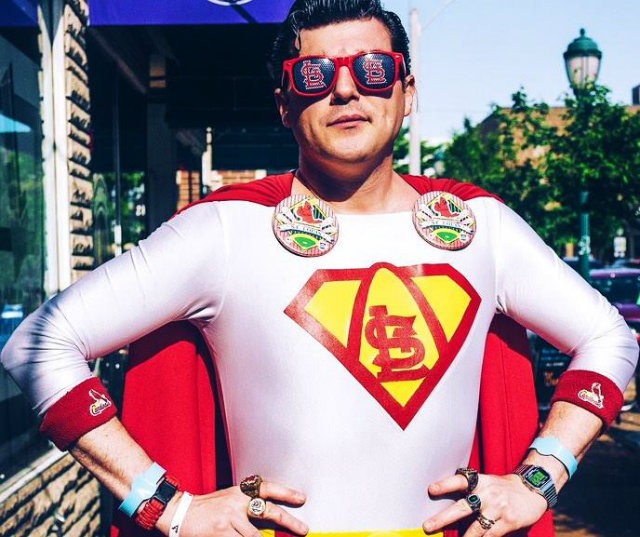 St. Louis Superman will be leaving his Busch Stadium days behind in the not-so-distant future — but not just yet.

Charlee Soffer has dressed as the Man of Steel for Cardinals home games since 2010, posing for pictures with fans outside the stadium. But on Sunday, Soffer announced on his St. Louis Superman Facebook page that 2020 will be his final season playing the superhero at Busch Stadium and Ballpark Village.

"In case some of you haven't heard. 2020 will be my last season at Busch Stadium and Ballpark Village St. Louis," Soffer wrote. "I have been very fortunate and blessed to be a part of #CardinalNation for 8 years now."

When Soffer started his Busch Stadium Superman gig, he tells RFT, he knew he wouldn't do it forever. However, he wanted to put in a good amount of time, and felt 2020 was a good goal.

Why the announcement now? Soffer thought it would be good to make people aware of his plans. While he won't be around forever, he'll still be here for a bit. Perhaps a comforting thought for any Superman superfans?

After he finishes his time as St. Louis Superman, Soffer says he'd like to get into more acting work. A bowler since age ten, he also says he'd like to enter some tournaments and see how far his skills can take him. He also want to focus on his relationship with his fiancee, whom he credits as one of his biggest fans (awww!).

Soffer says the people are his favorite part of working as Superman and that'll he'll miss the other street characters who work around the stadium. He'll also miss the camaraderie of Busch Stadium and Ballpark Village employees.

"I became a part of the Cardinal Nation, so to speak," he says.

Although the Cardinals' 2017 season is (sadly) now over, St. Louis' Superman is still busy — he's performing in a St. Louis-made film, Supermen: World War, which features St. Louis actor Kevin Calliber as Superman/Clark Kent and will be finished March 30.

Of course, Soffer will also be back at Busch next season ready to pose with fans — and despite popular belief, he wants people to know that it doesn't cost anything.

"Photo ops are always free. Gratuity is welcome, but I never charge."