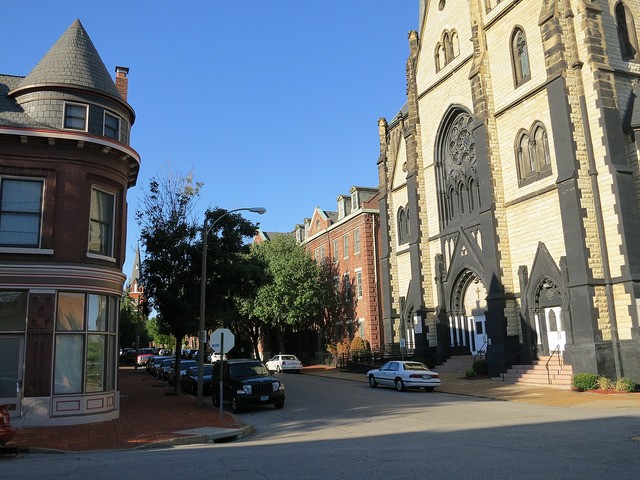 There sure are a lot of golf carts in Soulard these days. I tell ya, spend one minute on those historic streets and it doesn’t matter if you’re driving a car, pedaling a bicycle, walking on your own two God-given feet, or riding in a golf cart, your eyes won’t lie: Soulard is positively slathered in golf carts.

The presence of so many golf carts would make sense in an area located near a golf course. However, as any longtime St. Louisan will famously tell you, Soulard does not have a golf course.

“The nearest golf course is 5.3 miles away,” says Google Maps, an application that calculates distances.

I don’t think that driving a golf cart outside the confines of a golf course is necessarily wrong. I simply believe the act to be “a betrayal of the Name,” as my spiritual leader Pastor Honks Carlsman is so fond of saying. I’m not sure what he means by it, but y’all know I gotta give it up for my guy Honks one time.

Full disclosure: My mother owns a golf cart yet does not reside near a golf course. I think my sister gave the vehicle a nickname, but its sobriquet escapes me at the moment. In fact, I’m not sure my sister ever named the golf cart in the first place. I am ashamed to know so little about my family.

If you also own a golf cart, please feel free to drive it wherever you please, Soulard or otherwise. I only bring up their growing ubiquity since the subject has become a point of interest among my small circle of like-minded aesthetes and artisanal laborers.

Whilst recently reclining in a well-appointed hunting lodge, a dear hypothetical friend of mine remarked, “I wholeheartedly agree with you re: the matter of golf carts in Soulard. There are, absolutely and incontrovertibly, more around these days than in days past.”

Terminally ill but upbeat, he continued: “You are furthermore joyously correct in your assessment that Soulard’s proliferation of golf carts is neither inherently good nor evil; it is simply fact that golf carts are now as prevalent on her cobblestone streets as once were horse-drawn buggies or children guiding hoops with sticks.” His truth spoken at last, he passed on to the hereafter with solemn dignity.

I first noticed Soulard’s inundation of golf carts a couple of months ago when I went to get a gyro from Soulard Gyro & Deli, “A Reliable Destination For Gyros, In Soulard Or Otherwise.” I don’t think I’ve been back to the neighborhood since. Don’t get me wrong: I like Soulard. I just don’t go there much. For all I know the rise of golf carts in Soulard has been making headlines since 2010. That’s certainly what this 2010 Post-Dispatch story on the growing number of Soulard golf carts seems to imply.

Of course, this season’s current crop of carts might not occupy Soulard’s streets for much longer. With summer quickly fading into autumn, the chilly weather may convince some to keep their golf carts parked. And once winter finally comes, tearful citizens all over the area will cover carts in tarps and mournfully recite the verse that every Soulardinian learns from birth:

Then again, we’ve had some pretty mild winters lately, so maybe people will just tool around in their golf carts all year long. I don’t fuckin’ know.

All I’m saying is that there seems to be a significant number of golf carts in Soulard, at least compared to a few years ago. My name is Mike, I’m 32, and I have a degree in Journalism from the University of Missouri. Thank you for your time.