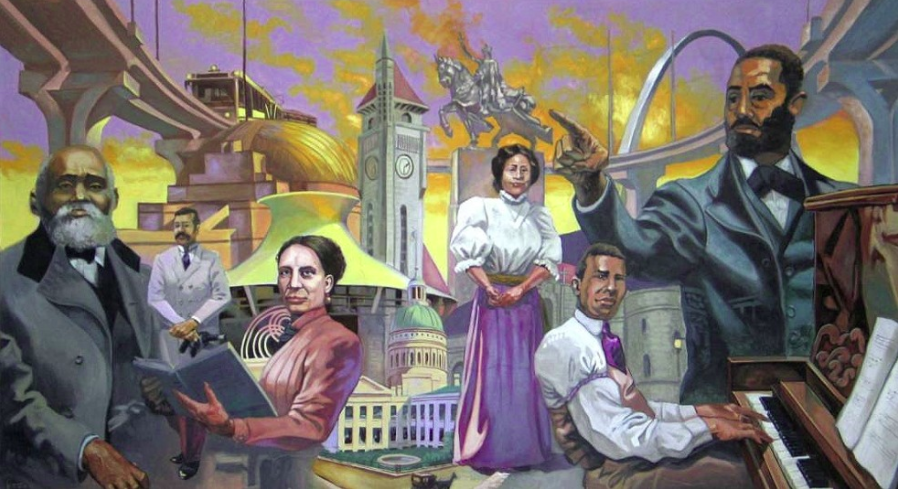 But Calvert's glorious purple-and-yellow-tinged mural is returning to City Hall this evening in a new form — the result of a three-year effort to save the piece from water damage and preserve it for the future.

Richard Bradley, president of the city's Board of Public Service, says that records show the original mural was dedicated in April 1997 after being commissioned by then-Mayor Freeman Bosley. The mural was largely funded by private donors, with the effort spearheaded by the St. Louis-based Portfolio Gallery & Education Center.

But the walls at City Hall are famously damp, with a layer of sandstone that was never sealed to outside elements, Bradley says. After two decades in those conditions, moisture had penetrated the painting and caused it to bow outward, with the plaster behind it failing. Calvert says he returned to touch up the mural on two different occasions, but the core problem, the damaged wall, remained.

Three years ago, Bradley says the Portfolio Gallery's Robert Powell approached the office of then-Mayor Francis Slay to advocate for the mural's preservation. The result took lots of back and forth, the artist's full cooperation and $13,482 in expenses, but on August 17, 2017, the city gave its blessing to a plan to photograph the mural in four high-resolution images, repair the wall, and then replace the original painting with four canvas prints of Calvert's original — basically four photo-printed panels on wood stretchers.

The panels are scheduled to be hung this evening, Bradley says.

Calvert says he's heard rumblings that people thought the city had taken down the mural around the time of the Stockley verdict, which has triggered public protests across the city. "I explained to them that there was no relationship," he says.

The artist says he is hopeful that the effort will yield a good version of his old work. Asked if he is feeling good about the project, Calvert says, "I will feel good when I see installed."