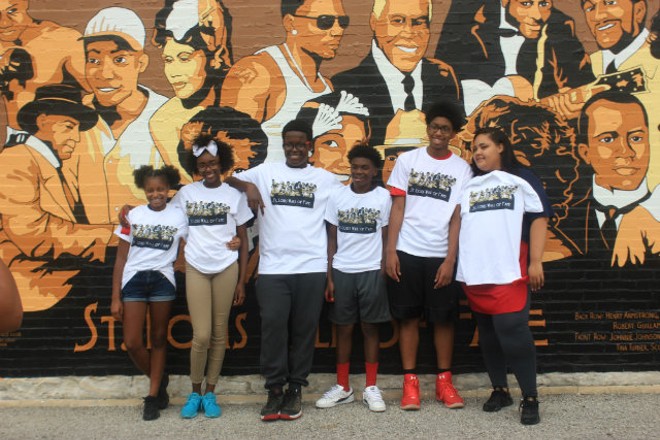 The St. Louis Wall of Fame is back.

The mural, which depicts some of St. Louis' iconic black artists and historical figures, had been painted in 2011 on the building that now holds Sauce on the Side in the Grove. The mural was removed when the old building, which is owned by the developer Restoration St. Louis, required extensive brick repair on each side.

But yesterday afternoon, thanks to local artist Grace McCammond and kids from the Herbert Hoover Boys & Girls Club, a new St. Louis Wall of Fame was unveiled on the side of the Gramophone at 4243 Manchester Avenue, presented to the public with a ribbon cutting.

McCammond also led the students at the Herbert Hoover Boys and Girls Club in painting the original St. Louis Wall of Fame in 2011. She says the background of the new mural is different, and of course the hand-mixed paint colors may vary from the original a bit. The greats from the original have returned, including Katherine Dunham, Dred Scott, Jackie Joyner-Kersee, Tina Turner, Miles Davis and Nelly, although this time they're joined by Dick Gregory, who passed away earlier this year.

Other than that, the St. Louis Wall of Fame 2.0 will look very familiar to those who knew and loved the original — and it drew a small, spontaneous crowd as people around the neighborhood saw its initiation taking place yesterday. 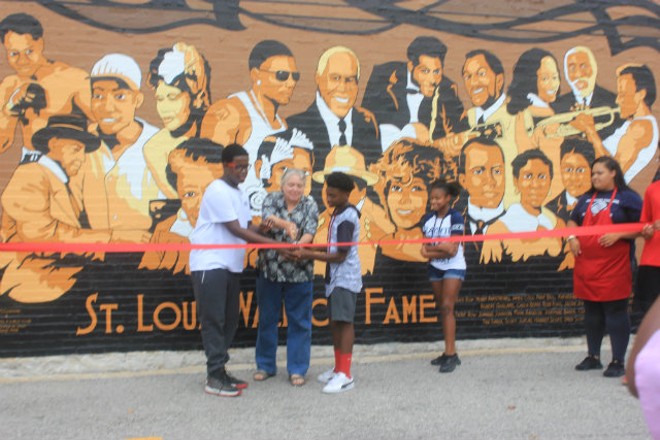 McCammond says she was originally supposed to paint a different mural on the wall, but she shifted gears to repeat the St. Louis Wall of Fame project.

Why? "It was missing," McCammond says simply of the beloved mural.

As the RFT recently reported, some black artists and community members had questioned why the original couldn't be saved — and what that erasure meant in a community with shifting demographics like the Grove. And so the project began about three weeks ago, again with McCammond overseeing a group of Boys & Girls Club artists.

Today, the student artists each spoke about one of the notable figures that is represented in the mural, who they've been learning about in the process. They were also presented with t-shirts emblazoned with the St. Louis Wall of Fame.

As for the mural's new location, McCammond says they had been offered some less-than-ideal places when the Gramophone offered up its wall space. It ended up being the perfect fit.

"This is almost like it just migrated," she says. "It's still very visible, it's easy for people to come up to and take a picture with without impeding traffic. It's a wonderful location."