The Best Things to Do in St. Louis This Week, September 22 to 26 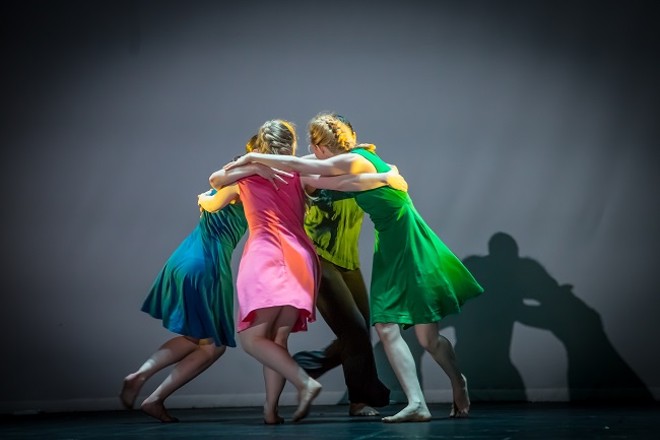 It's officially fall (ignore the persistent summer temperatures), and now we approach the season of festivals. We have more than a couple this week (spoiler alert, too late), celebrating everything from DIY culture to books. Throw in some beers and this could be the perfect weekend — hey, what's that at number 3?


1. Don't just get weird, get strange
After a short period of uncertainty concerning location, this year’s Strange Folk Festival is fully primed and ready to go in Carondelet Park (3900 Holly Hills Drive; www.strangefolkfestival.com). The DIY craft fair and fete has a full array of vendors selling handmade arts and crafts, as well as the bespoke playground Fort Featherbottom (kids only, please) and the Wandering Sidecar Bar (adults only, please). Strange Folk 2017 takes place from 3 to 7 p.m. Friday, and 10 a.m. to 7 p.m. Saturday and Sunday (September 22 to 24. A large selection of local bands perform all three days of the festival, ranging from Prairie Rehab on Friday to Afrobeat on Sunday. Admission is free, and just to add a little verve to the proceedings, the Bosnian Festival takes place the same weekend in another section of the park.

2. It's feast and madness at St. Louis Actors' Studio
Matt and Anna are by all accounts a happy couple. He's a painter with a burgeoning gallery deal, she's a modern business warrior-woman; really, all they can complain about is the groaning and gnashing of the plumbing, but what do you expect in New York? Matt doesn't really start to worry until the sewers begin talking to him. Then everybody he encounters speaks in the same sonorous voice, extolling him to fulfill his great destiny. Cory Finley's The Feast is an eerie comedy about the tenuous boundary separating reality from madness. St. Louis Actors' Studio opens its eleventh season with the Burroughs grad's play. Performances take place at 8 p.m. Thursday through Saturday and at 3 p.m. Sunday (September 22 to October 8) at the Gaslight Theater (358 North Boyle Avenue; www.stlas.org). Tickets are $30 to $35.

3. Oktoberfest, liebchen
It is admittedly strange that a festival named Oktoberfest starts in September, but sometimes traditions don’t make sense. Besides, do you want to argue semantics or drink beer and pogo to polka? Exactly. Urban Chestnut’s seventh Oktoberfest is this weekend at its midtown location (3229 Washington Avenue; www.urbanchestnut.com), with three days of beer, traditional German festival food (brats, pretzels, roasted chicken and currywurst) and music by the Deutschmeister Brass Band, the Bolzen Beer Band, Dave Hylla's Good Time Band and Die Spitzbaum. Admission is free, but you pay for food and drinks with tokens instead of cash or plastic. Tokens are $6 each, or available in advance as a pack of six for $25. One token gets you a sixteen-ounce beer pour or a small food item, while two tokens is worth one commemorative Oktoberfest bier stein; 33 ounces of beer in that stein; or one large food item. Tokens can only be purchased with cash on the day of the event, so either buy ‘em in advance or stand in line. 'Fest hours are noon to 11 p.m. Friday, 11 a.m. to 11 p.m. Saturday and noon to 7 p.m. Sunday (September 22 to 24).

4. Don't just read a book, celebrate books
Despite boasting two major library systems, a strong set of municipal libraries, a thriving culture of independent book stores and one of the strongest literary heritages of any city in America, St. Louis has had trouble maintaining an ongoing literary festival, with the notable exception of the St. Louis Jewish Book Festival. BookFest St. Louis aims to right that wrong with a long-lasting celebration of the literary arts. The inaugural BookFest St. Louis, which is organized and supported by the Central West End, Left Bank Books and the Left Bank Books Foundation, will take place Thursday to Saturday (September 21 to 23) at multiple locations within the Central West End (www.bookfeststl.com)and will feature panels with authors who write for children, those who write literary fiction, memoir, poetry and science fiction. Among the noteworthy authors participating are Sherman Alexie, Nebula Award-winner Charlie Jane Anders and her partner Annalee Newitz (founder of, and with Anders, the heart and soul of, science fiction blog io9.com) and Robin Sloan, author of Mr. Penumbra’s 24-Hour Bookstore. If you love books, this is the place to be.

5. Enjoy dinner and dining at the Grandel
Dance concerts usually have a visual and auditory component for the audience, but rarely include a flavor (unless you know a dancer very well, of course). For Karlovsky & Company Dance's Playful Pairings, your sense of taste will be stimulated as well. While the group performs a set of site-specific dances, wine pairings and treats devised by Chef Samantha Pretto that are designed to complement the themes and movements of each piece will be served. A small ensemble featuring piano, saxophone, bass, percussion and electronics will round out the sensory extravaganza. Perfect Pairings is performed at 8 p.m. Saturday, September 23, at the Grandel Theatre (3610 Grandel Square; www.karlovskydance.org). Tickets are $30.

6. Go back in time
Renaissance fests come in for a great deal of mockery from the general public, and most of it is unwarranted. If you have something against jousting demonstrations, turkey legs and people dressed up as kings and queens (and that dude in Jack Sparrow cosplay who shows up everywhere) having a good time outdoors, that’s on you. Sure, much of the entertainment is historically inaccurate, but that mishmash of time, culture and historical figures doesn’t stop you from enjoying Game of Thrones. Speaking of, there’s a replica Throne of Swords at this year’s St. Louis Renaissance Festival, and it’s free to sit on for photo opps. Other attractions this year include jugglers, a mermaid cove, improv troupe the Scally Wags and the tart-tongued women in the Washing Well Wenches. Plus, apple cider floats. Apple cider floats — c’mon. This year’s St. Louis Renaissance Festival takes place from 10 a.m. to 6 p.m. Saturday and Sunday through October 15 at Rotary Park (2577 West Meyer Road, Wentzville; www.stlrenfest.com). Tickets are $9.50 to $18.95, and you save money by buying your tickets in advance instead of at the gate.

7. ... And then go forward in time
Japanese filmmaker Hayao Miyazaki’s concern for the ecology and the future of the planet suffuse all of his films, but are on grand display in Nausicaä of the Valley of the Wind. Set a thousand years in the future, all living things are slowly being consumed by a vast Sea of Decay. One of the few remaining patches of unspoiled earth is tucked away in the Valley of the Wind. Nausicaä is a young woman who ignores the warnings of the elders and ventures out into the world on her small powered glider so that she can observe the changes happening all over the planet. Threatened by giant insects, warring clans and the slow march of destruction, she suddenly realizes there may be a way to restart the life cycle of the planet. Nausicaä is a sweeping film about a hero who believes in life more than she fears death. Fathom Events puts it back on the big screen for a limited time. You can see the English dubbed version at 12:55 p.m. Sunday and the subtitled film at 7 p.m. Monday (September 24 and 25) at Marcus Wehrenberg Ronnies 20 Cine (5320 South Lindbergh Boulevard; www.fathomevents.com). Tickets are $12.50.

8. The Templars, minus all the mystical claptrap
English historian Dan Jones has a knack for telling the big stories of history (the War of the Roses, the rise of fall of the Plantagenet family) in a conversational, easy-going manner. His new book, The Templars, attempts to free the soldiers of the feared Crusader-era military order from the centuries of legends, lies and fantasy that have built up around them. The Templars were many things — holy warriors, shrewd bankers and flawed men — but their destruction at the hands of King Philip IV of France had less to do with devil worship and secret conspiracies than it did Philips' massive debts to the Templars. Jones discusses the Order and his book at 7 p.m. Tuesday, September 26, at Left Bank Books (399 North Euclid Avenue; www.left-bank.com). Admission is free, but you must buy a copy of The Templars through Left Bank to get in the signing line.