The Best Things to Do This Week, September 7 to 13 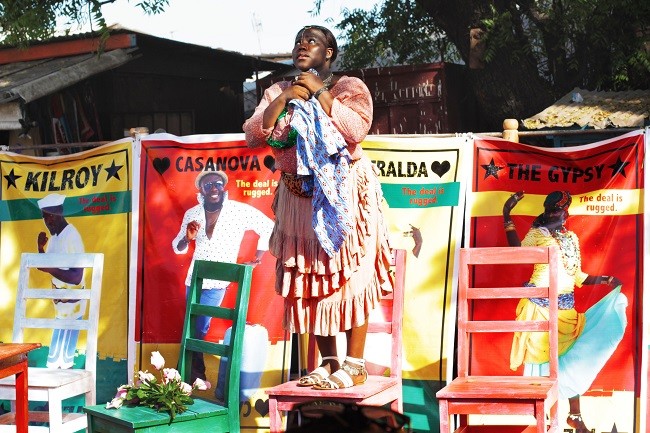 There's a chill in the air, a spring in my step and a flask in my back pocket; it must be Autumn in St. Louis. Pretty soon the Christmas lights will be up at Target. But let's not rush things — let's enjoy this weather while it lasts. Get out there and live it up this weekend, but bring a sweater.

1. Witness a mighty chin with a great man attached
Actor, raconteur and wielder of a most manly chin Bruce Campbell (Evil Dead, Jack of All Trades) is a man at peace with where he stands in Hollywood. The self-proclaimed B-actor's first memoir, If Chins Could Kill, revealed the world of "blue-collar Hollywood," where actors work steadily without ever breaking through to mainstream acclaim. His new book, Hail to the Chin, picks up the thread and chronicles Campbell's more recent years in Hollywood and points beyond. Campbell will sign copies of Hail to the Chin at 5 p.m. tonight at Left Bank Books (399 North Euclid Avenue; www.left-bank.com). Tickets are $35.99 per person for a copy of the hardcover and a signature. You must purchase the book from Left Bank to get in the signing line.

2. See an art exhibit about gender, beauty and blackness
New York-based artist Mickalene Thomas pursues the perception of black women in the spotlight in her new exhibit,

3. Learn how other cultures approach life post-trauma
Human beings' adaptability is what allows people to gradually come to terms with catastrophic change and trauma. In the Western world, we consider it possible for someone who has experienced a tragedy to "heal," thereby erasing a wrong. But the non-Western world doesn't always believe that disaster can be plastered over. In some countries, the scars and imperfections are celebrated. These conflicting ideas of past damage are the inspiration for French-Algerian artist Kader Attia's exhibition Reason's Oxymorons. Attia interviewed and filmed historians, storytellers, philosophers and ethnographers from around the world discussing their cultural ideas of healing psychic damage. These films are then continuously played on an array of televisions placed throughout a maze of gray cubicles. The viewer can pass from cube to cube, gaining exposure to previously foreign worldviews. Kader Attia: Reason's Oxymorons opens with a free public reception from 7 to 9 p.m. tonight at the Mildred Lane Kemper Art Museum on the Washington University campus (1 Brookings Drive; www.kemperartmuseum.wustl.edu). The show remains up through January 8, and the museum is open every day except Tuesday.

4. Live, from Ghana, it's Camino Real
Kilroy is an ex-boxer who wakes up in unfamiliar territory. He's here on the edge of nothingness, which is populated by such well-known strangers as Lord Byron, Casanova, Don Quixote and Esmerelda, the gypsy dancer from The Hunchback of Notre Dame. A series of ten short scenes plays out, many of them with songs and dances, driven by the dream-like qualities of a mystery play. Tennessee Williams' short play Ten Blocks on the Camino Real is an allegorical exploration of what happens when you age out of your fame and fall out of step with the larger world. Tennessee Williams Festival St. Louis brings the National Theatre of Ghana to town to presents its version of the show at a series of free public performances Friday through Sunday (September 8 to 10). You can catch it at 10 a.m. and 12:30 p.m. Friday at Strauss Park (Washington and North Grand boulevards); 10 a.m. and 12:30 p.m. Saturday at Soulard Farmers Market (730 Carroll Street); and 1 and 3 p.m. Sunday at Strauss Park again. Visit www.twstl.org for more information.

5. Go to the Black Rep's season opening show
Dotty is not who she once was — and some days, even she can admit that. Gone is the middle-class woman who raised three kids and used to entertain all and sundry during the holidays. In her place is a woman who forgets to take her pills and can't safely prepare her own meals or be trusted alone in her own home. Her daughter Shelly has taken charge of Dotty's care, but Shelly has her own life to get back to. What does Dotty have left? Colman Domingo's play Dot deals with aging, Alzheimer's and the unsettling passing of the baton that happens when children step up to care for their own parents. The Black Rep opens its 41st season with Dot. Performances take place at 7 p.m. Wednesday and Thursday, 8 p.m. Friday and Saturday and 3 p.m. Sunday (September 6 to 24) at Washington University's Edison Theatre (6465 Forsyth Boulevard; www.theblackrep.org. Tickets are $15 to $45.

6. Does anybody else feel like gettin' Bali Hai?
If you want to end a season on a high note, it's difficult to beat Rodgers & Hammerstein's South Pacific. The perennially popular musical has everything: sweeping romance, a pointed lesson about learned prejudice, the loss of innocence and the horrors of war. And we haven't even mentioned the songs yet, which include "There's Nothing Like a Dame" and "Some Enchanted Evening." Stages St. Louis brings down the curtain on its 2017 season with the incomparable South Pacific. Performances take place Tuesday through Sunday (September 8 to October 8) at the Robert G. Reim Theatre at the Kirkwood Community Center (111 South Geyer Road, Kirkwood; www.stagesstlouis.org). Tickets are $47 to $63.

7. Boy sleuth solves pooch murder
Christopher Boone is discovered next to the corpse of his neighbor's dog and is immediately accused of killing her beloved hound. Christopher professes his innocence, but nobody — neither the dog's owner, Mrs. Shears, nor his father — appears to take what he's telling them into account. Of course, Christopher has trouble understanding emotions and personal interaction; he's a bright young man, especially for a fifteen-year-old, but he just doesn't process people that well. So Christopher sets out to find the real dog-killer, which requires him to comprehend motivation and the many ways people fudge the truth. He's also going to have to go to London, a place that overwhelms him even when he's chaperoned by a responsible adult. This time, he'll go it alone. Simon Stephens won the 2015 Tony Award for his modern mystery The Curious Incident of the Dog in the Night-Time, which is based on the novel by Mark Haddon. The Repertory Theatre St. Louis opens its new season with this unusual coming-of-age story. Performances take place Tuesday through Sunday (September 8 to October 1) at the Loretto-Hilton Center on Webster University's campus (130 Edgar Road; www.repstl.org). Tickets are $18.50 to $89.

8. A Ceti eel made me recommend this
Star Trek II: The Wrath of Khan is not only the best film in the entire Trek canon, it also features William Shatner's finest performance. James T. Kirk is an older man who's being gently pushed out to pasture by the Federation, but he gets one more great adventure when his old enemy Khan Noonian Singh (the brilliant Ricardo Montalban) escapes from exile to seek revenge. Khan and his fellow escapees capture a ship and with it gain a weapon capable of reshaping a planet. They also get a handful of hostages, among them one of Kirk's old flames and her hot-headed, surprisingly charismatic son. The Wrath of Khan has action, Ricardo Montalban's fabulous pecs, and some serious consequences at stake — one of the Enterprise's original crew doesn't make it out alive. Paramount Pictures presents a special 35th anniversary screening of The Wrath of Khan with a special introduction from William ... Shatner. You can catch it locally at 2 p.m. Sunday and 7 p.m. Wednesday (September 10 and 13) at Marcus Wehrenberg Ronnies 20 (5320 South Lindbergh Boulevard; www.fathomevents.com. Tickets are $15.

9. David Bowie gone Tropicalia
Seu Jorge turned in one of the most memorable performances in Wes Anderson's film The Life Aquatic without speaking a word. The Brazilian singer played Pele, a sailor who sang Portuguese versions of David Bowie songs throughout the film, acting as both in-story soundtrack and a sort of Greek chorus. Hearing Bowie's '70s-era songs in a foreign language with only Jorge's acoustic guitar as accompaniment made them sound as new and as alien as they did when they first blasted out of your speakers. Jorge is on tour honoring the artistic legacy of David Bowie with Seu Jorge: The Life Aquatic, a Tribute to David Bowie. The show features a recreation of the film's set, with images from the movie projected onto boat sails while Jorge performs those incredible songs in his native tongue. Seu Jorge: The Life Aquatic, a Tribute to David Bowie takes place at 8 p.m. Tuesday, September 12, at the Pageant (6161 Delmar Boulevard; www.thepageant.com). Tickets are $30 to $40.

10. The Symphony, Sousa and you
The St. Louis Symphony is currently preparing for its new season — the final one with David Robertson wielding the baton — and at 7 p.m. on September 13, they'll blow out any remaining cobwebs with a free performance at the base of Art Hill in Forest Park. Conductor Gemma New helms this show, which features guaranteed crowd-pleasers such as "The Star Spangled Banner," the overture from The King and I and Sousa's "Stars and Stripes Forever." The only thing that can follow Sousa is fireworks, so it's a lucky thing they'll be playing outside. Bring a blanket and a picnic, or just a friend.