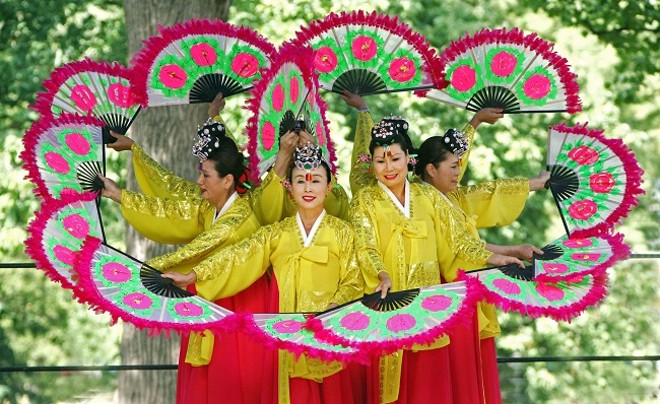 The eclipse is over; what's left to look forward to? Plenty. Summer's winding down, but there's always another weekend to fill up. Take your pick of art shows, documentaries, festivals and even a circus — we also have the bloodiest play Shakespeare ever wrote.

1. See a film about autistic kids striving for gold
What do you do as a parent when doctors predict your autistic child will never be self-sufficient? If you're Maria and Mike McQuade, you form a Special Olympics swim team for your son and other local autistic children, and you just keep going. Mikey Jr., Robert Justino and Kelvin Truong are three of the competitors on the Jersey Hammerheads, but they're the stars of Lara Stolman's documentary Swim Team. Within the discipline of training, practice and regular competition, the trio's lives open up — and their extended families find an understanding and empathetic social circle of their own. Swim Team follows the Hammerheads through one season, as the young men find a new world in the pool — one that's big enough for them to find better futures. The Webster Film Series and Easterseals Midwest present Swim Team at 7:30 p.m. Thursday, August 24, at Webster University's Moore Auditorium (470 East Lockwood Avenue; www.webster.edu/film-series). Tickets are $5 to $7.

2. It's soccer, but inside
It's a big year for the St. Louis Ambush. The indoor soccer team hosted the Major Arena Soccer League All-Star Game in June, and now it's one of three Midwest stops for the American Indoor National Team. Mexico, our neighbor to the south (we're separated only by a President), takes on Team USA at 7:35 p.m. Thursday, August 24, at the Family Arena (2002 Arena Parkway, St. Charles; www.familyarena.com). Officially this is an exhibition game, giving both sides a tune-up on the way to the World Cup (indoor soccer division) in October. Team USA is the defending champion, so expect Mexico to play a hard game. Tickets are $16 to $45.

3. Help crowdfund a new Batman project
Batman has lasted almost 80 years at this point, which means the character has more than a handful of fans. It seems like almost all of them have at some point made an unauthorized fan film starring the Dark Knight Detective. Some recreate a personal favorite story from the comics, while others go for crossover appeal (Batman vs. Darth Vader shows up in the No. 1 slot in a lot of "Best Batman Fan Film" lists for a reason). Local filmmaker Matthew J.R. Kohler went the film noir route with his film, Batman: Master of Fear. The film features a new character, Nightmare, a mysterious masked man who works with the crime lord Black Mask in an attempt to draw in Batman. The inaugural episode of a planned three-part "mini-web series" debuts at 8 p.m. Friday, August 25, at Webster University's Moore Auditorium (470 East Lockwood Avenue; www.webster.edu/film-series). Admission is free, and if you enjoy it you can donate to their Kickstarter, which will fund the remaining episodes.

4. Ponder tools that are no longer tools
Like many artists, Howard Jones is deeply enamored of his tools. These are the objects that channel the creative vision, after all. But Jones engages with tools beyond merely working with them. He views them as material and media, taking them apart, modifying them and reshaping them into art objects. In Jones' hands a shovel handle sprouts three blades; the handle of a paint brush sprouts a violin neck or an assemblage of pencils; and the legs of a chair curl out in rake heads. His exhibition Howard Jones: Think Rethink features a host of tools that offer an elegant beauty — and sometimes function as well. Think: Rethink opens with a free reception from 6 to 8 p.m. Friday, August 25, at the Craft Alliance Center of Art + Design (6640 Delmar Boulevard, University City; www.craftalliance.org). The show remains up through October 22, and the gallery is open every day except Monday.

5. Get lost in time
Gallery 210's long-running Exposure series brings together local artists who work in the same media or pursue the same ideas in their work. In the case of Exposure 19: Jumbled Time, Stan Chisholm, Lizzy Martinez and Adam Turl all share an interest in narrative art, whether that's the sometimes enigmatic phrases Chisholm stamps out on bricks and other building materials, or Turl's set-like assemblages of objects and paint that hint at the personality of their subject. Jumbled Time opens with a free artists' reception from 5 to 7 p.m. Saturday, August 26, at Gallery 210 on the University of Missouri-St. Louis campus (1 University Drive at Natural Bridge Road; 314-516-5976). The show remains up through December 2, and the gallery is open from 11 a.m. to 5 p.m., Tuesday through Saturday.

6. Shakespeare goes for the jugular
Roman general Titus Andronicus is tired of war. He's returned victorious one last time, bringing Tamora, Queen of the Goths, and her three sons back home as captives. He makes the fateful decision to sacrifice her oldest son to the gods in memory of his own boys, who died during the war. This infuriates Tamora — and her secret lover sees his chance wreak devastation on all sides. Bloodshed and ruin flow from this moment on, ruining Titus' remaining family, perhaps even breaking his spirit and his mind, while Rome teeters on the brink of ruin. William Shakespeare's tragedy Titus Andronicus is gory, violent and often horrible, but there is hard truth in all that blood. St. Louis Shakespeare presents Titus Andronicus at 8 p.m. Friday and Saturday and at 2 p.m. Sunday (August 25 to September 3) at the Ivory Theatre (7620 Michigan Avenue; www.stlshakespeare.org). Tickets are $15 to $20.

7. Meet and eat the world
If, for some reason, you wonder why immigration is vital to America, the best place to educate yourself is at the International Institute's Festival of Nations. For two days Tower Grove Park (4256 Magnolia Avenue; www.festivalofnationsstl.org) becomes a world party that brings together people from across the region and around the world. Among them are small businessmen and -women selling food and goods from their countries of origin, performers and artists sharing their culture, and citizens (new and established) who contribute to society in numerous small ways every day. The future of St. Louis — and of the country — is all around you at the Festival of Nations, celebrating the best parts of the USA. The 2017 Festival of Nations takes place from 10 a.m. to 7 p.m. Saturday and 10 a.m. to 6 p.m. Sunday (August 26 and 27). Admission is free, but bring your wallet so you can eat and invest in tomorrow.

8. Small-time hoods hit the big time
Every season of Trailer Park Boys begins and ends the same way. Nova Scotia's greasiest reprobates Ricky, Julian and Bubbles are released from prison so they can raise more hell back home at the trailer park, only to be returned to jail in the last episode. The new stage show A Fucked Up Evening with Trailer Park Boys alters the model a bit, with the boys escaping from police custody. They have an unknown amount of time to drink, smoke and antagonize trailer park supervisor Mr. Lahey and his live-in boyfriend Randy before they're busted again, so they have to make the most of it. The Boys take the stage at 7:30 p.m. Sunday, August 27, at the Peabody Opera House (1400 Market Street; www.peabodyoperahouse.com). Tickets are $31.50 to $56.50.

9. The circus rolls into town
Now that the Ringling Bros. Barnum & Bailey Circus is gone, UniverSoul Circus is the top-ranked circus in America. The popular show returns to St. Louis for two weeks of performances at at 1111 North Broadway (www.universoulcircus.com), next to the Dome. Along for the ride this year are Detroit's Fresh the Clowns, whose dance "JuJu on that Beat" has become a viral sensation. Along with the Clowns are the Bone Breaking Contortionists from Guinea, China's Aerial Silks and the always popular Caribbean Dancers. UniverSoul Circus performs multiple shows daily August 24 to September 4 (no performances on August 28 and 29). Tickets are $13 to $40.