Around St. Louis, the Solar Eclipse Was Indeed Epic 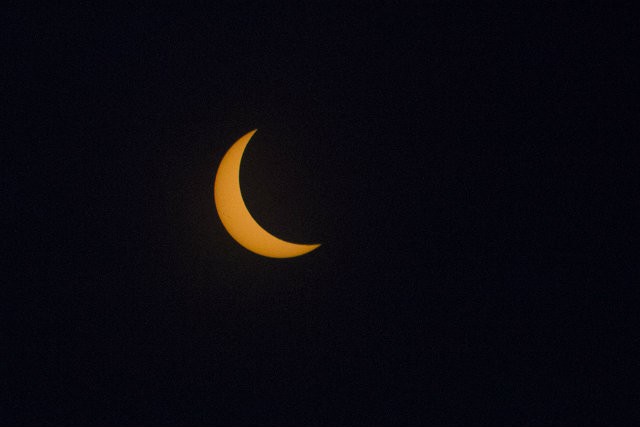 Eclipse chasers from near and far gathered across the St. Louis area for a chance to see the first solar eclipse to travel across the continental U.S. in 38 years. In various parts of the region, day became night for anywhere from a brief moment to as long as two minutes and 40 seconds, complete with sunset-colored clouds, the sound of cicadas and an ominously dark sky.

Did the eclipse live up to your expectations? We've gathered photos from across Missouri and southern Illinois to document the eerie beauty. And if you missed out, worry not...another solar eclipse is coming to the U.S. in 2024.

Here's a look at what went down in the St. Louis metro area and other nearby cities.

Cool to see lights in downtown St. Louis go on during eclipse pic.twitter.com/HUuTB2lSPO

Totality in Carbondale except for the light of a ton of cell phones. #eclipse pic.twitter.com/LaO6MhKyYf

Solar eclipse, covered by clouds. The whole sky was dark at 1:07pm. We got a tiny glimpse of the totality when Bryan pointed pointed out a break in the clouds. It was spectacularly beautiful, for that one fleeting moment. People applauded. It was amazing.

Is it just us, or did the eclipse look like an eyeball in De Soto?

Columbia, Missouri got a good view, too.


Afton got a glimpse of the action.

The view from Jefferson City.

When you're an amateur photographer and you waitlist minute to buy proper lens that don't actual fit so you just tear off those eclipse glasses and tape to your camera lens. Lol.

Waterloo, Illinois got a front row seat, too.

the solar eclipse JUST HAPPENED, had a great time experiencing it with these space nerds. #WokeSquad2k17

For a few minutes, the entire region paused and stared up at the heavens, feeling the vastness of the cosmos and the brotherhood of mankind.