Whose Streets? Speaks the Truth of What I Saw in Ferguson 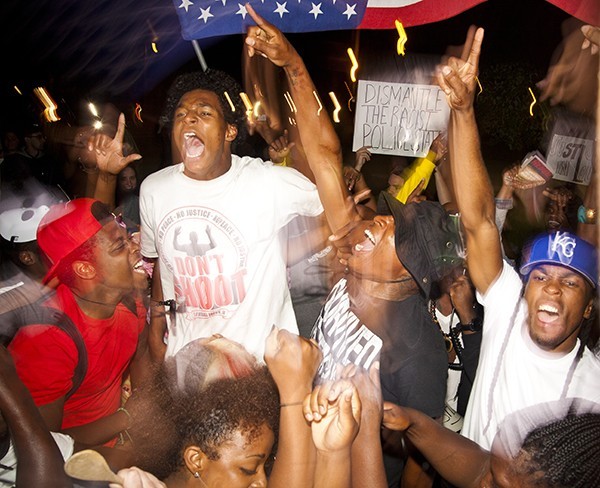 I had heard the buzz about Whose Streets? from the critics. The critics didn't get repeatedly gassed, slammed to the ground and arrested in Ferguson. They didn't lose their jobs as a result of Ferguson, as I did along with many others. Their inboxes weren't flooded with death threats as mine was, and they weren't impoverished as a result of participating in the Ferguson Uprising. I say this to make clear: I don't give a fuck about the critics. My only concern entering the theatre was whether Whose Streets? would be true to history and give those street soldiers who risked it all their just due.

Friends of mine were skeptical about directors Sabaah Folayan and Damon Davis, fearing they'd focus on an artsy, liberal, non-threatening narrative focused on academics , instead of the story of an organic St. Louis uprising. I tried to enter the theatre with an open mind.

I left persuaded. Whose Streets? was true. It was true to the history I saw and participated in, true to what really happened in Ferguson.

While the video often focuses on the protest power couple of Brittany Farell and Alexis Templeton, other key activists are prominently featured including Tef Poe, Kayla Reed, Bassem Masri, Tory Russell, Ashley Yates, Montague Simmons, Dhoruba Shakur, Dave from CopWatch, and others. Some of my videos were used (and even my voice at one point), along with the videos and tweets of friends. Most impressive to me: The film gave respect to the likes of Brother Anthony Shahid and the late Darren Seals, who had often been critical of Black Lives Matter and those Damon Davis is often associated with. Others have chosen to deny their role. Whose Streets? did not.

Starting with eyewitness cellphone videos and interviews, the film gets off to a fast pace, quickly bringing me back to those hot and tense nights of August 2014. The cries of Lesley McSpadden, the mother of Mike Brown; the anger of the neighborhood crowd, gathered on Canfield as Brown's body lay on the ground for hours; and the arrival of the St. Louis County Police dogs set the stage for an explosive confrontation.

Already, that August 9, St. Louis Twitter was buzzing, black radio DJs like DJ Kut were talking about the shooting and Brother Anthony Shahid was on the ground. However, what we think of as the Ferguson Uprising began the next day, on August 10.

I'd been on Canfield earlier in the day and told my brothers at the mosque Naji Adams and Anthony Merrill, "Tonight is gonna be epic.” As the three of us walked down West Florissant that night towards the police line, I remember having the feeling of being on the edge of history. Naji whispered in my ear the words of Imam Jamil al-Amin: “In the '60s in East St Louis he told us a real man has a book of matches in his pocket, but in the '90s he taught the verse from the Quran: oppression is worse than slaughter." Whose Streets? uses my voice and video from this moment — the moment when the police turned a peaceful protest into an uprising. 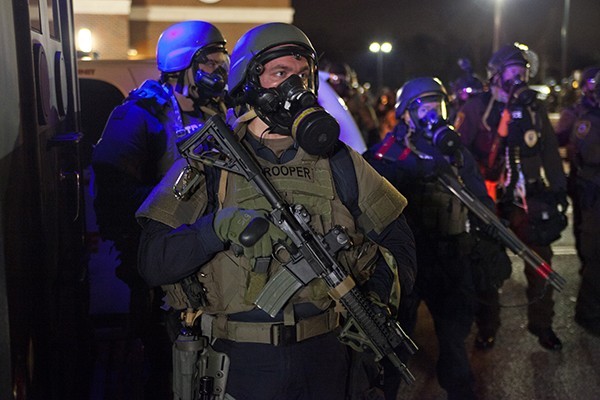 The turn came as police held their line on West Florissant and Ferguson. The crowd marched towards them while keeping a respectful distance. Then a projectile of some sort was fired by the police. All hell broke loose. Objects started flying in all directions, the police fled, and within minutes QuikTrip was overrun and more businesses followed. As the film notes, "A riot is the language of the oppressed."

All of us who were there remember the teargas. As I watched the film I remembered my eyes burning, taking painful breaths and the sensation of choking. I remember marching with others into the smoke encouraged by their courage. Unintimidated by the brute force of the police. Inspired by the soldiers like Edward “Skeeda” Crawford, throwing the canisters back.

The film chooses to focus on the movement, not the things that ended up dividing it — and ultimately, I respect that choice. This isn’t a definitive history. Everyone was initially out there for the same reason: Mike Brown. The division came later.

The roots of that division, I believe, came in Ferguson October, the moment when the professionals attempted to take over. Whose Streets? didn’t explain it quite that way. They simply quoted Montague saying, "We needed more people.” That was definitely true, as lines had begun to thin.

Those people came, but with the entry of funds and activists from the Big Left, White Allies Inc., George Soros, whatever you want to call it, local activists began fighting over the belief the narrative had been co-opted by outsiders — and increasingly, fighting over money. The fight often pitted prominent women and LGBT activists on one side, who were often the recipients of the newly flowing funds, and black men on the other, such as Darren Seals, sometimes derided as "hoteps.” Two months prior everyone had been arm in arm.

There’s no question the filmmakers are on the side of those who got paid, the professional organizers. Yet to their credit, they don’t give short shrift to those who didn’t, people like Seals and Shahid. It's notable that only after Ferguson October does the Black Lives Matter sign appears in the film. I'm not sure if that was conscious or not (that's when I first saw BLM signs, most enthusiastically from white activists in south city), but it is telling.

The years since have only seen this gap grow more severe, with some activists moving onto well-paid positions and others struggling. Ferguson led to me losing my job, it led to my brother Talal Ahmad losing his, and the two of us eventually sleeping in the basement of a dope house, pistols beneath the pillow. Employer after employer told us we were too hot to hire due to Ferguson.

Ours is just one of many such cases, and others have faired even worse. Darren Seals is dead — the victim of an unsolved murder. Skeeda is dead, too, his death has officially been ruled a suicide. Protester Joshua Williams, charged with arson, burglary and stealing, has been sentenced to eight years in prison.

The film shows Tef Poe speaking at the Chaifetz Arena rally, stating he wasn't interested in the academics and activists who came for Ferguson October with their "philosophical lenses" and endless analysis. The film also quotes Poe calling out preachers, asking where were they on West Florissant when people are getting teargassed. Al Sharpton and Jesse Jackson weren't featured at all in Whose Streets? because they played no significant role in the Ferguson Uprising.

At one point in the film, activist Tory Russell calls out President Barack Obama for his absence in Ferguson, stating that he was still waiting on the first black President. The film shows Obama, who never did visit Ferguson, speaking words to try to calm the community after Prosecuting Attorney Robert McCulloch announced that the grand jury had failed to indict Brown’s shooter.

That November night was a violent one. Police indiscriminately fired teargas in every direction. The gloves were off, and they were there to take back the streets. I remember standing on the sidewalk with my then-girlfriend and an officer turning towards us and firing teargas directly at us. We posed no threat. It did not matter. On that night, cops were out for revenge. The film captured these moments brilliantly.

The film closes with the children being raised by Brittany and Alexis leading chants. It’s a beautiful moment, one that allows the viewer to hope for a better future. But before the credits roll we're reminded of two things: Josh Williams is still in prison. Still loved. Darren Seals is still dead. Still unsolved.

RIP Mike Brown. Whose Streets? Our streets. See this film.

Umar Lee is a St Louis-based writer and activist. You can follow him @penofUmar and contact him at Umarlee@gmail.com