In The Half Beneath, B. Robert Wilson Explores the Life of a Slave — His Great Great Grandfather

St. Louis writer B. Robert Wilson's first book may be a novel, but its inspiration still comes from real-life — the very real life of his great great grandfather.

John Lyle Wilson was born a slave, but lived a remarkable life that included fighting on the Confederate lines in the Civil War, fleeing and joining the Union, and, in the aftermath of the war, becoming a landowner with significant holdings in Kentucky. His life is now the focus of The Half Beneath, which was released last week by TouchPoint Press.

Wilson, 26, says his interest in his past began at a young age as his grandfather passed down the family history.

“He would tell these stories over and over again and, being one of the younger grandkids, I’d usually get pigeoned into having to sit there and listen to it as other people wandered off,” Wilson says. “Over the years it became less of a chore and more something I really enjoyed. As I got older I started wondering how much of it was actually true.”

This curiosity continued nagging Wilson until the summer of 2011. Despite being a prospective pre-med student at the University of Kentucky, Wilson realized his priorities were elsewhere. For his “sanity,” Wilson needed to act on the question that had been bothering him for years: Where did I come from?

With the help of his father, Wilson decided to “dive in, head-first” — a journey that would ultimately last five years.

He began by driving to Big Island, Virginia, where Wilson’s great great grandfather was born. Wilson talked to locals, dug through newspaper clippings and went door to door to learn what he could.

Though he acknowledges that he must have “looked a little crazy,” Wilson even stumbled upon some distant relatives, who graciously invited him to sleep on their couch for the summer.

“In certain communities, you can be ten times removed and they’ll still treat you like you’re close,” Wilson says.

Wilson started writing in their living room as a way to organize all of his research. He only decided to create a novel out of his adventure later.

John Lyle Wilson’s upbringing was especially complex because his master was dually his father through rape. In The Half Beneath, Lyle is considered his slaveholder’s property but also his flesh.

“Lyle has to struggle with what it means to be family,” Wilson says. “Whether biological relationships have anything to do with fatherhood, motherhood and brotherhood, or if there’s something that transcends all that.” 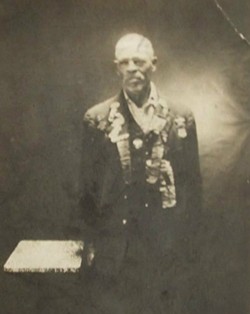 Wilson relates to his ancestor’s identity struggle. Though he identifies as African American, and so do both of his parents, he recognizes the complexity of the label.

“At the crux of the story is that race is a constantly changing thing, and somebody who is biologically mixed or of multiple ethnic backgrounds can be cast completely as one or the other,” Wilson says. “John Lyle, biologically, has perhaps even more European than he does African ancestors, but he is treated entirely as a black slave.”

Wilson also identifies with his great great grandfather’s internal struggle with how to best resist. Because John Lyle Wilson is his master’s son and perhaps can attain more trust other slaves, he considers subscribing to the system in the hopes of being able to change it.

In the same form, as a college-educated, relatively privileged African American, Wilson struggles with the effectiveness of compliance.

“It’s something a lot of us grapple with today — whether cooperating with a system that you see oppressing people around you is a way to resist because you may ultimately gain the power to correct things, or whether sort of rejecting that privilege is the more principled option,” Wilson says. “I think a lot of my own politics and struggles are sort of written into the story that’s about someone who lived 150 years before me.”

Wilson stresses the idea that the past transcends current events. Despite the current discourse on race issues in St. Louis, Wilson argues, too many of us believe we are disconnected from the past and the future.

“History is not something that’s said — it’s alive and dynamic and recreated on a daily basis, and whether we realize it or not we’re constantly interacting with it,” Wilson says. “We’re not the individuals we think we are.”

In addition to gaining perspective on his adventure, Wilson has walked away with multiple mementos of his ancestry. First, “through the guidance of God or my ancestors” Wilson was able to stumble upon the cemetery that some of his ancestors were buried in. Though it wasn’t in a county courthouse listing or on a map, Wilson discovered the abandoned site and spent his limited free time cleaning up the cemetery to honor his ancestors.

In addition, Wilson recently reclaimed 90 acres of John Lyle Wilson’s former farm just north of Lexington. After working and saving as much money as he could and pleading with the current owners about the significance of the land to him, Wilson brought his great great grandfather’s history full circle.

“I had sort of a deep spiritual connection that I felt to the land when I came across it, and it was something I couldn't shake for years,” Wilson says. “It’s kind of an amazing end to this story and perhaps even the beginning to another story.”

In the mean time, Wilson resides in what was once his great grandmother's home in north city, working on a second novel with similar themes and jokingly urging his family members to collectively apologize to his grandfather for their unwarranted skepticism. The old family stories may have sounded better than fiction, but they were apparently true.