How to Not Suck at Recycling

The first total solar eclipse to pass over St. Louis since 1442, which takes place August 21, has garnered worldwide attention, turning small towns throughout Missouri into international tourist destinations and inspiring a plethora of eclipse-related merchandise (even an eclipse-themed beer).

As a nature-lovin’, earth-motherin’ type, I’m stoked for the once-in-a-lifetime opportunity to see a celestial reminder of our place as a speck in our solar system, governed by gravity and an indifferent universe. But I’m also a little concerned about one potential side effect of the solar sensation: mountains of discarded viewing glasses.

This might not seem like a big deal, considering magnitude of other problems we face as earthlings: problems like climate change, nuclear war, massive species extinctions, and human rights violations. While these issues take a priority spot in my worried brain, I believe that throwaway culture — the practice of using temporary items designed for a single use, like straws, but last for an eternity — is a problem worth addressing. It’s a problem that fills our landfills and litters our streets — litter that eventually makes its way to the ocean by way of the wind or floating in stormwater. Trash in our waterways isn’t just unsightly — it’s unhealthy for critters, which eat floating bits of plastic because they think it’s food. Millennia of evolution has trained aquatic creatures and birds that lil floaty bits are plankton or fishy morsels. It would take hundreds of years of evolutionary development to unlearn eating flotsam.

Trash is crummy for human health too, and not just for the BPA or BPS leaching into your single-use water bottles (the BPS compound often used as an alternative in “BPA-free” bottles can be as bad or even worse than BPA, according to recent research). When fish eat plastic and we eat the fish, we are also eating plastic. (Cue Sir Elton John singing “The Circle of Life.")

Single-use trash is a problem, but luckily it’s solvable problem — a problem you can help solve. The national average recycling rate, which measures the amount of recyclable materials that make it through recycling facilities, is at just 34 percent, according to the U.S. EPA. That number is alarming because the majority of the waste that people generate is either recyclable or compostable.

The St. Louis recycling rate varies by area; some areas are above the national average, and some are far below. That is partially due to messaging — environmentalists like me haven’t done a great job of explaining what should be recycled or how recyclable items are processed — and the education we have done is not always distributed in an equitable way, leaving out a large and important part of the population. We’ve done an even worse job of explaining that the phrase “reduce, reuse, and recycle” is in that order for a reason, and that reducing the amount of stuff you buy that is destined to be thrown out, recyclable or not, is the most important thing you can do to reduce your waste footprint.

Another reason for our poor recycling rates is straight-up confusion or temporary blindness when residents are confronted with the signs affixed to nearly every blue recycling bin in the St. Louis. I have personally pulled televisions, chairs, clothes and even diapers out of recycling bins. Just so we’re all on the same page here, none of that stuff, ESPECIALLY DIAPERS, are recyclable in single-stream bins like the ones the city uses. While single-stream recycling facilities are marvels of modern science, they are not as advanced as those who tell me they recycle “everything” would assume. TVs and other electronics are only recyclable at annual recycling drives and at specialized facilities year-round; they can’t go in single-stream bins because they are hazardous to workers at recycling facilities, among other reasons (like the lack of mechanical engineers hanging out along facility conveyor belts to properly dismantle them).

Chairs and other household items, meanwhile, should go to Goodwill (the “reuse” part of “reduce, reuse, recycle), or, if they’re destroyed, the trash. Clothes and other textiles are recyclable at facilities that have a specialized bin for them, or they can be dropped off at Goodwill. They, too, do not belong in your St. Louis recycling bin.

Important side-note: Wood is not paper, and cannot be recycled like paper. In fact, some paper items, like coffee cups, can never be recycled in single-stream bins because they are coated with a wax/plastic composite that makes pulping impossible. Pulping is where magazines, cardboard, and other paper goods are shredded, washed and re-formed into useful items, like toilet paper.

However, other paper items with waxy surfaces like cartons of orange juice or almond milk are recyclable. In fact, they're separated from the other paper in recycling centers and used to make items like wallets. 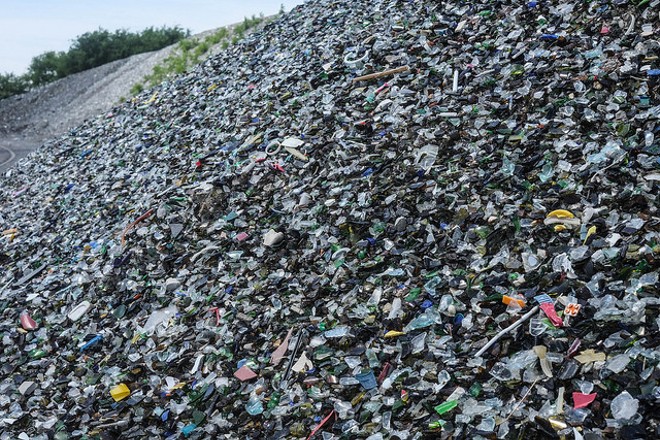 In the future, the hope is that coffee cups will be manufactured in such a way that they can be recycled, but in the mean time, try carrying a reusable mug into your favorite shop (a trick that might get you a discount). Small plastic items like straws and plastic cutlery also cannot be recycled, unfortunately, due to their small size, and chip bags cannot be recycled because they are a composite material (a material made from many substances). These items end up on the floors of recycling facilities or lost along the way, so, unfortunately, they belong in the trash.

Other items that pose a problem for the recycling industry are plastics with the #6 stamped in the bottom. A few recycling companies take #6 plastic, but no recycler accepts Styrofoam, a form of #6 plastic, in single-stream bins. Furthermore, Styrofoam food containers can never be recycled due to contamination (even when they are diligently washed out). Styrofoam is particularly harmful to the environment, as the tiny pellets are easily broken and swept away by wind, practically guaranteeing that the plastic bits will end up in a waterway. Styrofoam is also crummy for human health, as it leaches styrene — a reasonably anticipated human carcinogen — into hot or fatty foods (like BBQ) or hot beverages (like coffee). Sometimes I notice a recycling symbol stamped into the bottom of Styrofoam containers and a little blood shoots out from the corners of my eyes. The recycling symbol is not regulated in any way, and its appearance on the bottom of a Styrofoam container is about as meaningful as it would be tattooed on my rear end (a tattoo I’ve considered, trust me).

The biggest problems in local recycling bins aren’t coffee cups, though, or Styrofoam, although both are a pain in my not-yet-tattooed butt. Plastic bags and other films are the real enemy of the recycling industry. They never, ever go in recycling bins due to the chaos they cause, even if the plastic bag has a recycling symbol on it or is made from a “recyclable” plastic. Plastic bags sabotage the whole dang operation by getting tangled in the equipment at recycling facilities, causing the plant to shut down until the shredded plastic trash is recovered. A black plastic bag full of perfectly recyclable items might not ever make it through the system; workers at facilities deal with so much contamination from plastic bags that a trash bag could reasonably assumed to be full of garbage and sent to the landfill. To avoid this fate, throw your recyclables in the bin without a bag, and take your plastic bags and films back to the grocery store, or, better yet, avoid plastic bags altogether.

Answer the following questions if you’re unsure where your plastic goes:

1. Is it wider than a half-dollar coin?
2. Is it firm?
3. Does it bend instead of breaking when bent?

If the answer to all of these questions is yes, it’s probably recyclable .... unless it’s made with a bunch of different types of plastic, in which case it probably does not belong in your blue bin. Recycling facilities don’t employ teams of people with blowtorches or whatever to separate one kind of plastic from another — a task that would be difficult and costly, and would probably create unhealthy fumes.

Which brings me back to solar eclipse viewing glasses.

There are two common kinds of viewing glasses for the solar eclipse: paper frames and plastic frames. Plastic frames, unfortunately, need to go in the trash (or kept as a memento), because they are made from several kinds of plastic. Paper glasses, however, can totally be recycled. Paper can almost always be recycled, and that includes magazines, envelopes with plastic windows and even pizza boxes. Just avoid throwing wet, food-drenched paper, napkins or coffee cups in single-stream bins.

Overwhelmed by the recycling rules outlined in this editorial? Fear not! Lots of St. Louis organizations are here to help you figure it out, including Brightside St. Louis, EarthWays Center and St. Louis Earth Day. These organizations are determined to get clear, consistent messages across to citizens who are eager to do the right thing and answer any questions you might have about recycling. The city governments of St. Louis city and St. Louis County are also trying to improve their recycling rates by creating handy-dandy guides to recycling in their jurisdictions — use these when in doubt. I want you to see the solar eclipse without blinding yourself, so go ahead and get glasses to watch this spectacular event. But please, consider purchasing recyclable paper glasses for the two minutes and 38 seconds of celestial celebration. While you’re at it, consider using alternatives to the other kinds of plastic you use in your daily life, and try to recycle what you can.

Jenn DeRose is program manager for the Green Dining Alliance, a program of St. Louis Earth Day, a freelance writer, and a tree-hugging earth mother.