No Siree, the Loop Is Not Getting a Ferris Wheel After All

The dreams of all those who longed for high-flying family entertainment in the heart of the Loop have been dashed to pieces.

The developers behind a plan to erect a Ferris wheel within the lot at Skinker and Delmar that once held Church's Chicken have withdrawn their proposal, the St. Louis Business Journal reports.

The executive director of the Skinker-DeBaliviere Community Council attributes the decision to neighborhood concerns about "parking, noise and lighting, and other congestion-related issues," per the weekly.

Church's Chicken closed in 2013. Even as big projects have claimed real estate around it — from fancy new apartment complexes to a proposal for a big old office complex to, yes, trolley tracks — it remains the empty anchor of a very busy intersection.

Apparently, some locals believed that shoving fifteen parking spots along an alley wouldn't be quite enough parking for a project that involved not only a ride with twenty enclosed capsules, but also a beer garden below. And we have to imagine they also weren't crazy about a structure soaring eight to fourteen stories in an intersection zoned for three stories or less.

(Have they no vision?)

The developer, Tony Sansone Jr., told the Business-Journal that he and his partners never meant for the idea to gain the "momentum or attention that it did." He also said he wasn't sure if they'd look elsewhere for a new spot for a Ferris wheel.

Previously, they'd looked at the site that held Mike Shannon's downtown, but opposition from the owners of Hilton St. Louis at the Ballpark killed that idea.

So they've gotten strike one downtown, strike two on the city's western edge. We can only guess where they might want to look next. 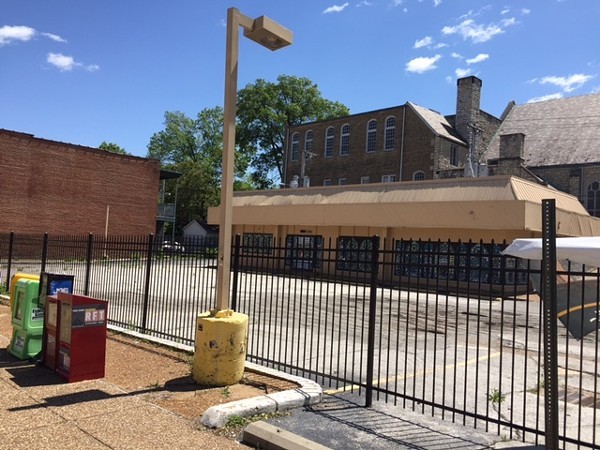