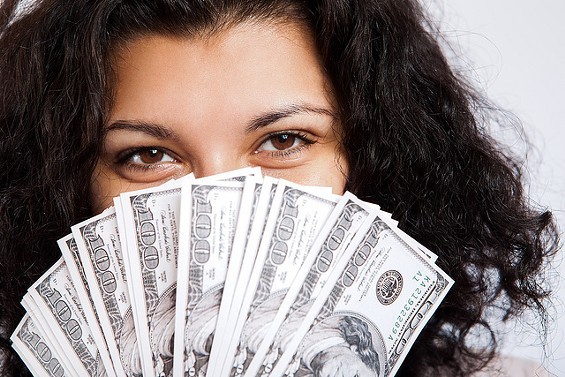 Yep, you read that headline right.

Starting today, Ally Financial Inc. is launching a campaign entitled "Hardest Working Dollar" that will garner some fortunate St. Louisans $100 and $5,000 — and even $10,000 for one lucky winner.

The bank says it's planning to put 500 specially designated dollar bills into circulation in the city via convenience stores, coffee shops and diners where cash is regularly used.

Those dollar bills are not marked. But if one of them ends up in your hands before July 31, and you happen to enter its serial number into a special form via this site, your odds of winning suddenly get very, very good.

Basically, if yours is one of the 500 eligible dollar bills, you'll be prompted to fill out an official entry form in order to be entered into the prize drawing. That entry form will need to be completed by July 31 at 11:59 p.m.

In addition to the $500 it's circulating in St. Louis, Ally says it's rolling out the campaign in New York City, San Francisco, Cleveland, Dallas, Seattle, Phoenix, Charlotte, Boston, Atlanta and Salt Lake City.

"Think of this one as an online scavenger hunt. Money, of course, can start out in Detroit or Dallas but end up somehow in Denver or Des Moines. It's almost like the Willy Wonka golden ticket," says Andrea Riley, Ally chief marketing and public relations officer.

So, if you've got way too much time on your hands and dollar signs in your eyes, we'd recommend entering the serial numbers of any dollar bill you acquire in the next 33 days.

The sweepstakes will be running from June 29 until July 31 at 11:59 p.m. For additional information and a few stipulations, see the contest website.