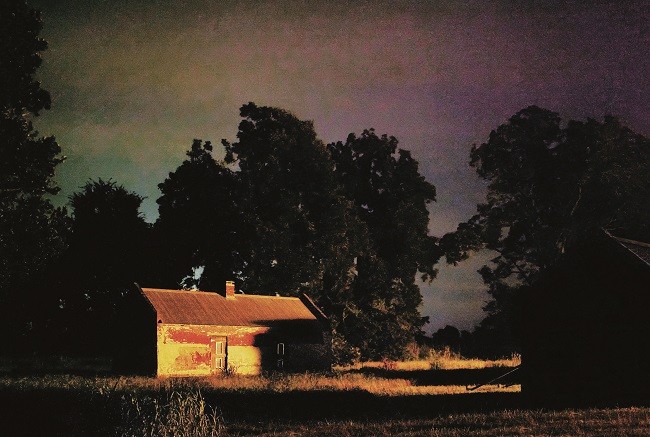 We're one week out from the Fourth of July and a glorious four-day weekend. But oh, rest assured, there's plenty of things to do and enjoy over this next four day stretch. We have art, fashion, pop culture and a whole lot of gay pride lined up. Get out there and roll around in summer.

1. Witness the stops along the Underground Railroad
Photographer Jeanine Michna-Bales wanted to document the Underground Railroad, the circuitous trail that stretched more than 1,400 miles from Louisiana to Canada. Perhaps 100,000 black men and women followed that course to freedom in the early part of the nineteenth century to escape slavery. Rather than photograph the safe houses and hiding places in natural daylight, Michna-Bales sought to recreate the trail as the hopeful people who made the crossing would have seen it: in the dead of night, with no human beings in sight. Her photographs capture the stillness and solitude of the American wilderness. A river crossing takes place in almost total darkness, the trees on the other bank nigh invisible in the night. In some of Michna-Bales' images, traces of light from the setting sun give the trees rising up out of the bayou the menacing shape of people. It took Michna-Bales ten years to research and photograph the passage, but it was time well spent. The resulting exhibition, Through Darkness to Light: Photographs Along the Underground Railroad, is an emotional as well as visual record of a harrowing journey. Michna-Bales discusses her photographs at 5:30 p.m. Friday, June 23, at the Griot Museum of Black History (2505 St. Louis Avenue; www.thegriotmuseum.com). Her images will remain on display through Friday, August 11, and the museum is open 10 a.m. to 5 p.m. Wednesday through Saturday. An accompanying monograph, which pairs the images with passages written both by people who made the journey and noted abolitionists, will be available for purchase during the show. Admission is $3.75 to $7.50.

2. Undertake an art walk
It's never a bad time to support local artists, but the need is greater than ever of late, as funding for arts programs is being slashed on the national level. The Loop Gallery Walk brings together hundreds of artists, all on one street. Seven venues stretching along Delmar Boulevard from the University City Public Library (6701 Delmar Boulevard) to the Regional Arts Commission (6120 Delmar Boulevard) host exhibitions from 6 to 9 p.m. Friday, June 23. Among the highlights: The Silver Lady welcomes Bosnian/Croatian jeweler Marija and Serendipity Gallery hosts photographers, jewelers and "tar artist" Barbara Marshall, who photographs the abstract patterns that form on city streets when the pavement cracks. The Loop Gallery Walk is free. Head to www.visittheloop.com for the full schedule.

3. Lean into the collision of personal and political
People today are more plugged in to the political process than ever. That's both good and bad. It's good that people are more informed about the issues and feel more strongly about them, but it's bad that most people rely on social media and partisan news sources to get that information. Prime Theatre takes on the personal/political schism in its new 24-hour play festival, The Identity Show. Six playwrights wrote new works with topics that include corporate personhood, coming out and the issues that divide the nation. Now a committed group of actors and directors have taken on the challenge of learning their parts and mounting these short plays. The entire process from conception to production happens in 24 hours to keep things as fresh and visceral as possible. The Identity Show debuts at 8 p.m. Saturday, June 24, at the Ethical Society of St. Louis (9001 Clayton Road, Richmond Heights; www.primetheatre.org). Tickets are $15.

4. Check out a new comic book about early St. Louis gangsters
The year 1904 was a momentous one for St. Louis, with the World's Fair and the Summer Olympics both showing off what was then the fourth largest city in America. St. Louis was growing rapidly, and a few lucky beer families were making money hand over fist. Carlos Gabriel Ruiz and Jim Mosley return you to that golden age in their new independent comic book, The Baron Age. It's a crime story about a small-time gang that does the dirty work for one well-known family of brewers, busting heads by day and partying with the glitterati at night. Ruiz and Mosley celebrate the release of their comic with a launch party and signing from 1 to 3 p.m. Saturday, June 24, at Barnes & Noble (8871 Ladue Road; www.facebook.com/BNLadue). Admission is free, and copies of the first issue will be available for purchase.

5. Celebrate gay rights at the city's largest party
Pridefest Weekend is upon us, and it behooves anybody who is down with the cause to show up. Last year more than a quarter-million people attended the three-day party, and it would send a fantastic message to the powers that be if that total were topped this year. All those educated, fired-up voters celebrating marriage equality, bears, transsexuals and loving families of all shapes and sizes will be a thumb in the eye to that ever-shrinking segment of society that frowns on gaiety. This year's party takes place once again at Soldiers Memorial (Fourteenth and Chestnut streets; www.pridestl.org/pridefest), and the festival grounds will be open from 4:30 to 10:30 p.m. Friday, 11 a.m. to 9 p.m. Saturday and 11 a.m. to 7 p.m. Sunday (June 23 to 25). Kat DeLuna, Brandon Stansell and Laura Bell Bundy all perform, and the year's best parade starts at noon on Sunday. Admission is free, but donations are much appreciated.

6. Party like the Brazilians
We're heading into the sweatiest part of the year, but countries south of the equator are preparing for winter. In Brazil, this seasonal change is marked by the Festa Junina, a celebration of rural life. Families gather to perform the quadrilha, which is a square dance accompanied by Brazilian country music, and everybody dresses up in the stereotypical garb of rural Brazilians (red-checked dresses and shirts, pigtails for the women, straw hats and painted-on freckles are the hallmarks). Viva Brazil invites you to get in on the action at its Festa Junina from noon to 4:30 p.m. Sunday, June 25, at the Kirkwood Community Center (111 South Geyer Road, Kirkwood; www.vivabrasilstl.org). There will be folk music and dancing, traditional Brazilian food and drinks, and carnival games. Tickets are $5 or $15 for a family of up to five members.

7. Reassess how the men-folk dress
It was the poet-philosopher Billy Gibbons who first posited that "every girl is crazy 'bout a sharp-dressed man," and yet on the whole, American men have settled for athletic team logos and cargo shorts. But there's more to life than five-pocket shorts and t-shirts. Reigning Men: Fashion in Menswear 1715-2015, the new exhibition at the Saint Louis Art Museum (1 Fine Arts Drive; www.slam.org), celebrates the beauty and style that's available to men. The show traces development of the suit from its origins as a military uniform through the heavily embroidered great coats of the nineteenth century, with a detour into the effectiveness of the black leather jacket before finishing up with modern sartorial splendors. Reigning Men is open Tuesday through Saturday (June 25 to September 17), and admission is $6 to $15, but the show is free on Friday.

8. Visit with everybody's pal, Totoro
Two young girls move with their father to the countryside and experience strange goings-on. It sounds like a by-the-numbers horror movie, but Hayao Miyazaki's My Neighbor Totoro is in fact a family film. Sisters Satsuki and Mei find their new home is inhabited by small soot goblins — and that a host of unusual creatures with rabbit ears appear when no adults are around. Are these apparitions really there, or are they merely manifestations of the girls subconscious fears for their mother, who has been hospitalized with a mysterious illness for far too long? Mei believes they're real, and that the large, bear-like spirit she calls Totoro is keeping a friendly watch over them. My Neighbor Totoro is revered for its mystical view of the natural world and its realistic characterization of childhood — and also for the lovable Totoro. Fathom Events presents two screenings of My Neighbor Totoro this week. You can see the dubbed version at 12:55 p.m. Sunday, June 25, or one with subtitles at 7 p.m. Monday, June 26, at the Marcus Wehrenberg Ronnies Cine (5320 South Lindbergh Boulevard; www.famthomevents.com). Tickets are $12.50.

9. See a film about a female lighthouse keeper
Thomas is a lighthouse keeper on the coast of Maine. It's a tough life, one that requires rigorous discipline and near-constant work to maintain the lighthouse in harsh conditions. Fortunately he can rely on his wife Abbie — and since Thomas has been bedridden with a serious illness, Abbie has taken on all of his daily duties. When Abbie finds a man washed up on the rocks, she tends to him as well. But things are bound to change once the government inspectors show up; no woman could be expected to manage a lighthouse in 1876, despite all evidence to the contrary. Erica Fae's film To Keep the Light won Fae the emerging director's award at the 2016 St. Louis International Film Festival. To Keep the Light receives another screening at 7:30 p.m. Monday, June 26, at .Zack (3224 Locust Street; www.cinemastlouis.org) as part of the Films @ SLIFF .Zack series. Admission is free.

10. Meet with LGBTQA freedom fighter Cleve Jones
Cleve Jones has been on the front lines of the fight for LGBTQ rights for 40 years. His youth was spent in free-wheeling 1970s San Francisco, where he joined Harvey Milk's office as a student intern. Invigorated by the power of the people, Jones then founded the San Francisco AIDS Foundation as the disease was tearing through his community, and continued the fight with the NAMES Project AIDS Memorial Quilt. All along his message has been that nothing will change unless the people will it to happen; we must keep raising our voices and standing up for what we believe is right. Jones' new memoir, When We Rise, tells the story of his life and remembers the people who helped him, loved him and inspired him to keep pushing for equality. It just won the Lambda Literary award for Gay Memoir/Biography. Jones will be at Left Bank Books (399 North Euclid Avenue; www.left-bank.com) at 7 p.m. Monday, June 26, to discuss his book and sign copies. Admission is free.