What’s your biggest fear? Eating deep-fried tarantulas? Speed-jumping a car over a canyon? Being buried alive?

Like most folks, we’ve got a list of nightmare scenarios a mile long, but St. Louisan Christopher Peterson isn’t having any of that. The amateur mixed martial arts fighter recently landed a spot on the new Fear Factor revival, with his episode scheduled to air at 9 p.m. Tuesday, June 20, on MTV.

“I wanted to attempt a lot of the challenges, whether that’s getting up to a helicopter from a speeding boat or eating scorpions or whatever they have for contestants to consume,” Peterson says of his reasons for applying to become a contestant on the popular show. “I really wanted to see if I would choke.”

Fear Factor, which originally ran from 2001 to 2006 and briefly again from 2011 to 2012, is known for its gross-out gags and death-defying stunts. Contestants typically perform dangerous tasks based upon urban legends, popular movies and viral videos in a quest to win $50,000. Rapper/actor Ludacris hosts the new iteration currently airing on MTV, encouraging players to face down their nightmares for the big prize.

“I wouldn’t say I’m a person who scares easily. I think my biggest and possibly my only fear is that of large bodies of water — so drowning. Despite of being an athlete, I’m not a very good swimmer,” Peterson laughs. 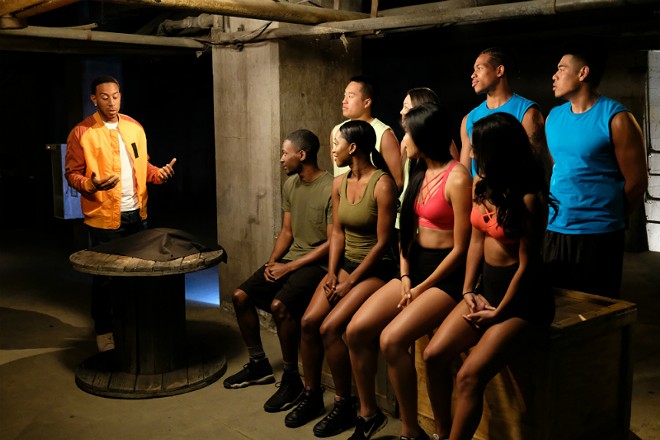 We’re not sure what the Fear Factor producers ultimately dared Peterson to do or how he fared (Mum’s the word until the episode, titled "Computer Bugs," airs tomorrow), but the 25-year-old tells us that he was prepared for anything.

“I definitely feel like my background of MMA gave me competitive edge on the show, with the mental act of preparing for fights and the physical act of being athletic,” says Peterson, who has been training in mixed martial arts for nearly ten years. “But one of the best things about the show is there’s no way to prepare for the type of challenges that may come. You just have to see what they give you and see if you’re ready for it.”

St. Louisan Amanda Gavins will join Peterson on Tuesday’s episode. Gavins, whom Fear Factor producers say is afraid of spiders, is an adrenaline junkie who routinely skydives, ziplines and rock climbs. She partnered with Peterson for a number of stunts. Peterson says that he and Gavins were coworkers while doing sales-related work for a cable company.

And of course Peterson will enjoy even more hometown support from his family and friends, who will be gathering at his grandmother’s house in the Gateway City for an episode watch party.

“They’ve seen the preview for my episode, so they’re very excited,” Peterson says. “I’ve had a lot of people contacting me, asking ‘What happened? What happened?’ I just tell them they’ll have to tune in!”

To prepare for Tuesday, watch the "Fear Factor" episode teaser below to see Peterson chow down on what looks like *gulp* a live snake.