Eleven years ago, Matt Miofsky did something highly unusual in St. Louis: He started a new church. But this weekend, Miofsky's congregation, the Gathering, will embark on something even more rare these days in the Gateway City: They'll break ground on a new church building.

The $6 million construction project at 2360 McCausland Avenue will give the burgeoning congregation more room to worship, a bigger lobby area to interact, increased space for kids' classes, better access for those with disabilities and a parking lot that actually suits their needs. It's not replacing the 1920s church building they've been using for services, which is at 2105 McCausland, but it will be rendering it as something of a satellite, with the new building set to become the congregation's new house of worship and main hub. 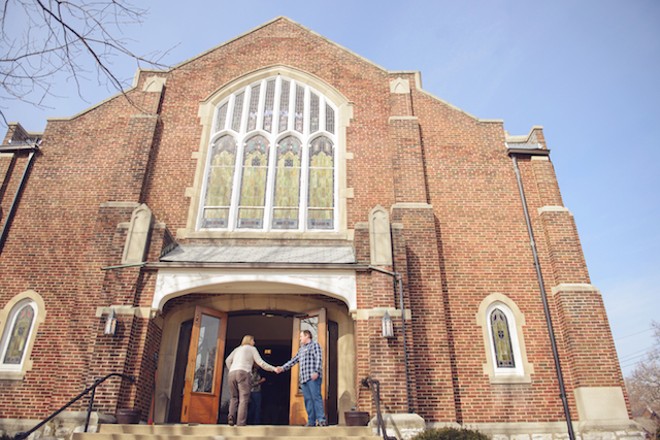 The problem with the older building, Miofsky says, "is that it's just too small. It holds maybe 275. The new space will hold 600 at a time."

Six hundred? Does the congregation really require room for that many? Miofsky, modestly, gives a one-word answer: "Yes."

What's perhaps most remarkable about that reply is that the group that, well, gathers on McCausland is not the Gathering's only address. The eleven-year-old congregation, which is part of the United Methodist denomination, also has an outpost in Webster Groves and one in Clayton, as well as what they call "Bar Church," which meets at Cafe Ventana in Midtown. The construction project won't be consolidating those other locations; all three will continue to host worship services of their own, even as McCausland alone is apparently capable of drawing 600 souls. That's how big this operation has become.

Now, there are certainly large non-denominational churches growing by leaps and bounds in the area's newer suburbs. But for a church to grow so quickly in a city like St. Louis — a city that, in fact, sees churches closing on a regular basis — is definitely something unusual. The Gathering's executive director of operations, Dave Dietrich, has consulted city historians and the church's alderman; no one can think of any sizable place of worship (say, capacity for 200 or more) that's been built within city limits since St. Philip's, the strikingly modern Lutheran church in the Ville.

Miofsky, whose title is now lead pastor, understands just how unlikely the Gathering's success has been. "People thought I was nuts for starting a new church, first, and second for doing it in the city," he acknowledges. "Churches all over the place were closing or wanting to close, and there were all these abandoned church buildings."

But, he says, the idea of starting from scratch proved a huge part of the Gathering's success: "We could look at everything from the lens of what would make sense to people living here in our city now, not trying to preserve something that was formed a long time ago."

When it became clear that the McCausland branch of the congregation needed a bigger space, Miofsky says its members looked hard at the older church buildings dotting the city, places that had been abandoned by other congregations. But disability access was a big problem with many buildings, and others lacked features that were important to them. (Older churches, for example, tend to have very small lobbies — one reason why you'll see an immediate exodus after services are over. The Gathering wants people to mingle.) And beyond that, maintenance costs rendered many old buildings just as costly as newer alternatives, Miofsky says. Construction from the ground up seemed the way to go.

And so this Sunday, June 4, the Gathering will officially celebrate its groundbreaking with a party on site at 2360 McCausland at 12:30 p.m. There will be food trucks and music and a general air of festivity. All are welcome.

And if you'd rather wait to see the place when it's finished, they hope to be open by Easter ... right there at Manchester and McCausland.

Says Miofsky, "We really love St. Louis, and we believe its best days are ahead of it. We want to be a church that participates in bringing that about — in our own small way, with this project, we're investing in the future of the city."